I’ve been quite homesick ever since I returned from my long weekend visit to Dallas, so it was such a treat when I stumbled upon this issue of Papercity from May, 2004 as I was unpacking my office yesterday. As you know, I am positively obsessed with Jan Shower‘s work, and so for years I have saved this champagne cocktail of an article that features tastemaker Kimberly Schlegel‘s glamorous and chic apartment, where she lived before becoming Mrs. Kimberly Schlegel Whitman. Today, Kimberly serves as a lifestyle expert, party planner, editor-at-large of Southern Living, and social media aficionado. If you don’t already, you will want to follow her fabulous blog. She has exquisite taste!

Let’s take a look inside Kimberly’s former bachelorette pad! You may recognize several of the treasures, as they were moved to the Whitman’s current home, also designed by Jan Showers and featured in Traditional Home. 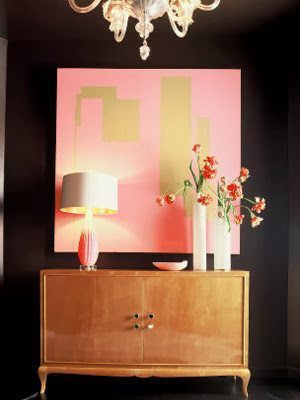 The entry hall features a 1940s Andre Arbus commode, pink Murano Venetian glass lamp from Jan Showers, and a painting by Texas artist Peter Jordan, all under a 1920s Venetian glass chandelier that Showers found in Paris. The walls are draped in mink… Benjamin Moore’s Mink, that is! 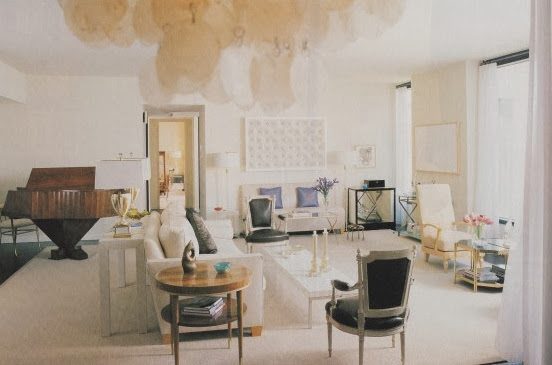 Schlegel’s main salon, with its unusual A. Bord piano from France; a Showers-designed Parsons table and sofa; a pair of hand-guilded porcelain “trophy” lamps that Showers found in New York and re-shaded; a circular, two-tiered table that Showers thinks looks suspiciously like Edward Wormley for Dunbar; a pair of Louis-style, brown leather upholstered chairs Showers scored at a shop in Los Angles (“They are from some unnamed movie star’s house – they wouldn’t tell me who!”); a long, low coffee table made of cut strips of laminate by Giig & Iggi that Schlegel snapped up in New York (“An art piece,” says Showers. “I want one”); and, far right, a Normandie chair from the Jan Showers Collection cozied up to a par of 1960s Italian tables (together they make an octagon) by Saporiti. 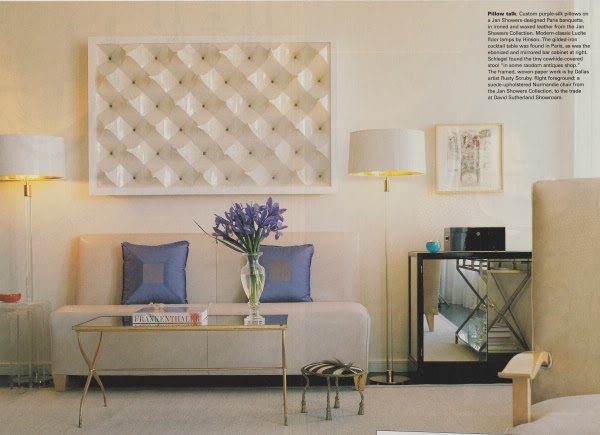 Custom purple silk pillows on a Jan Showers designed Paris banquette, in an ironed and waxed leather from the Jan Showers Collection. Lucite floor lamps by Hinson. The guilded iron cocktail was found in Paris, as was the ebonized mirrored bar cabinet at right. Kimberly found the tiny cowhide-covered stool “in some random antiques shop.” The framed, woven paper work is by Dallas artist Rusty Scruby. 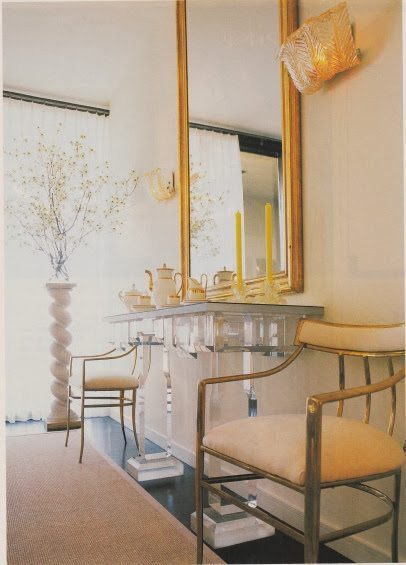 The Lucite console table in the dining space is “on loan,” said Schlegel, from friends Brandt and Brady Wood, whose parents had a pair in the 1960s or ’70s. The brass chairs are from Tom Landry’s estate; Schlegel bought a set of them, originally upholstered in four different bright colors. Showers supplied the 1940s glass sconces, which are fragments of a larger fixture, and the simple Napoleon III mirror. The service is Old Paris, circa 1870s, that Showers found in Brussels. The plaster column is 1940s French, from Jan Showers. Clarence House Italian voile curtains billow from nickel-finish rods. 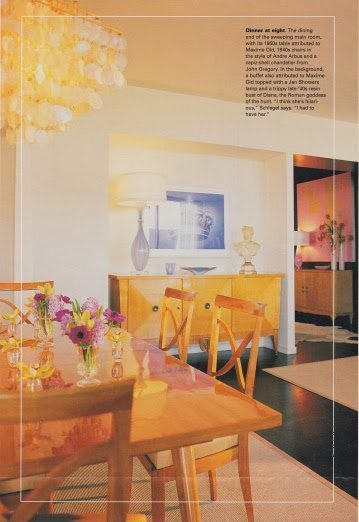 Dinner at eight. The dining end of the sweeping main room, with its 1950s table attributed to Maxime Old, 1940s chairs in the style of Andre Arbus and a capiz shell chandelier from John Gregory. In the background, a buffet also attributed to Maxime Old topped with a Jan Showers lamp and a trippy late-’40s resin bust of Diani, the Roman goddess of the hunt. “I think she’s hilarious,” Schlegel said. “I had to have her.” 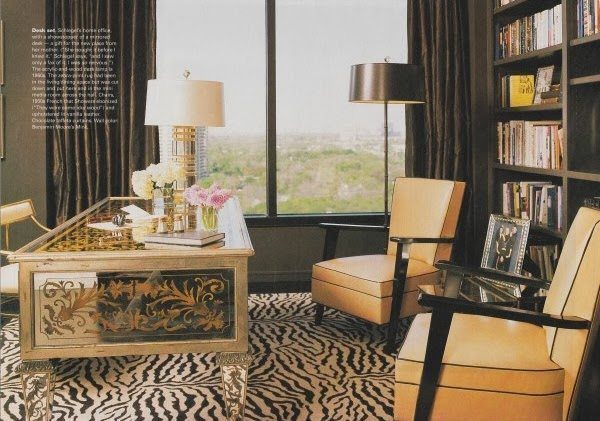 Schlegel’s home office, with a showstopper of a mirrored desk – a gift for the new place from her mother. (“She bought it before I knew it,” Schlegel said, “and I saw only a fax of it. I was so nervous.”) The acrylic and wood desk lamp is 1960s. the zebra-print rug had been in the living/dining space but was cut down and put here and in the mini-media room across the hall. Chairs, 1950s French that Showers had ebonized (“They were some icky wood”) and upholstered in vanilla leather. Chocolate taffeta curtains. Wall color: Benjamin Moore’s Mink. 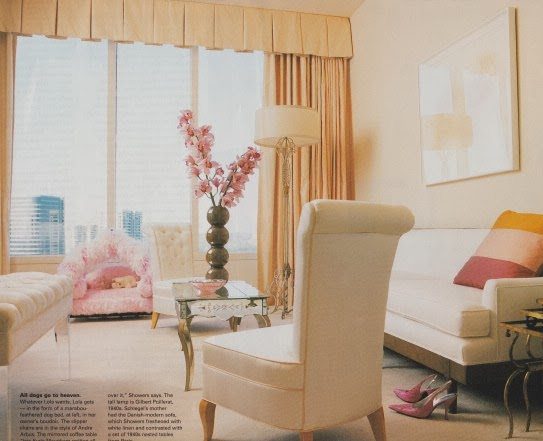 Whatever Lola (Kim’s Chihuahua) wants, Lola gets… in the form of a marabou-feathered dog bed, at left, in her owner’s boudoir. The slipper chairs are in the style of Andre Arbus. The mirrored coffee table “has Syrie Maugham written all over it,” Showers says. The lamp is Gilbert Poillerat, 1940s. Schlegel’s mother had the Danish-modern sofa, which Showers freshened and contrasted with a set of 1940s nested tables from Paris. 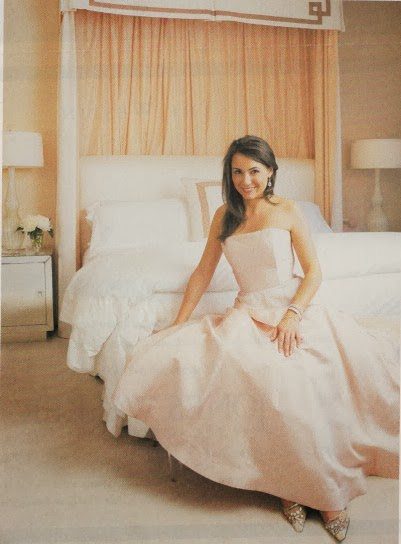 The lady of the house in a dress that’s “vintage something.” Jan Showers envisioned the whole room as platinum, until a phone call from Schlegel: “I really want yellow or pink.” (“So we found a good, yummy, blush-y color – not Pepto,” said Showers’ senior designer, Susan Devening.) The custom-designed, silk-upholstered headboard was inspired by a bedroom by decorator Vicente Wolf. The mirrored chest at left – “very Hollywood Regency,” said Showers – is one of a pair. Venetian glass lamps, 1950s.
REPRINTED FROM PAPERCITY, May 2004:
FADE IN:
Ext: Gleaming Turtle Creek Boulevard High-Rise – Day
CUT TO:
Int. Dimly Lit Elevator
We see the back of a lovely girl (long dark hair, late 20s) as she faces the elevator doors. She is wearing Prada, Chanel, or Gucci – maybe all three. At her right stiletto, her constant companion, Lola, a bouncy Chihuahua wearing, by the way, an Hermes-logoed silk ribbon, perfectly tied around her little neck. Whoosh. Elevator doors open. Camera follows girl and dog from behind as they sashay down a dark-paneled hallway with dark-patterned carpet. The lighting is low. They reach a set of imposing, dark-paneled double doors. Girl fumbles for key in vintage handbag. Click. Turn. Push.
CUE MUSIC:
“Come fly with me/ Let’s fly, let’s fly away…”
FADE TO WHITE…
Put down your popcorn: Kim Schlegel has come home. Okay, there’s no camera – and this is no movie. But there is a Kim. There is a Lola. (The Hermes ribbon: that’s real. ) And there is definitely a stage set of a place where the two live, high above Turtle Creek Boulevard.  It is a glamorous pad, complete with a (real) double-door entry; a sexy, cave-like, dark chocolate brown front hall; and a sweeping, side-to-side living/dining space filled with French ’40s furniture, a baby grande piano, a dangly capiz shell chandelier, and all manner of glamour. Oh, and the view: full glass walls framing a panoramic vista over the Frank Lloyd Wright theater, across other glittering high rises, and as far north as the eye can see. Come fly with me, indeed. This is the apartment of your movie dreams, filmed in CinemaScope, Panavision – the works. A terribly swish place that The Thin Man’s elegant Nick and Nora Charles would love.
Good luck wrestling it from Schlegel. High-rise living suits the owner of RSVP Soiree (a party-rentals and invitations company) and soon-to-be authoress (her first entertaining book, The Pleasure of Your Company, from Gibbs Smith publishers, makes its debut this October) just fine, thank you. “It’s so easy,” she says, “and there’s always someone around to sign for packages or check on you. I feel so secure.”
When beau Justin Whitman even hints at maybe finding a nice little town house for them to share one day, Schlegel tells him, “I am not moving out of here unless you can supply three valets, a concierge, and a doorman!”
The 27-year-old Schlegel rented the 2,400-square-foot apartment for a year before signing the deed, then called on decorator Jan Showers to set the stage for a busy life. The two had worked together on Schlegel’s former apartment at the Terrace House and on her office at RSVP Soiree. “I already knew that I liked Jan’s style,” Schlegel says of Showers’ glam-goddess rooms shot with French modernity, “and I knew that she understood my style and what I was after.” Showers couldn’t wait to get her hands on the new project. “I was in love with this space from the moment I saw it.”
But first, a little editing. The 1980s built-ins and burgundy marble: Cut! Pared-down surfaces and reconfigured rooms: Action! Walls get pushed around here and there to open and clarify the space, and a former bar and closet become a tiny media lounge with a wall-mounted flat-screen TV. With a freshened kitchen, a bedroom converted to an office and an enlarged entry hall, Showers and Schlegel turned DeMille and Deitrich working together (“It’s hilarious,” Showers says, “Kim and I know what each other is going to say”) to prop the place with a mix of new and old, French and American, pink and mink.
The production worked, and now Schlegel has a glam-girl lair to go with her glam-girl life. Books galore, tiaras, Cariter, Manolo Blahnik, fine art (Schlegel packs an Honors degree in art history from SMU.) Snapshots everywhere: Kim with Fergie, Kim with George and Barbara Bush, Kim with Laura Bush. But this is no surreal soundstage. It really is a functioning place where the cell phone tweets, Lola yaps, the housekeeper whisks about, and the double doors swing open frequently – with walk-ons by The Hair Colorist, The Sister, The Delivery Man, even The Decorator. And if you squint just so, you can almost see Nick and Nora over by the cart of Bombay gin, against that Turtle Creek backdrop, slinging barbs and having a very swell time.
Almost as if on cue, Schlegel queries to no one in particular: “Don’t we need some music in here?” She disappears, and in seconds a song begins to bounce through the apartment.
Yep, it’s Come Fly With Me.
CUE MUSIC:
“Once I get you up there/ Where the air is rarified…”
And that’s a wrap.
Article written by Rob Brinkley, photography by Ka Yeung.  Reprinted from Papercity.

« You May Be Wandering
A Hollywood Glam Apartment, by Jan Showers »