When the current homeowner purchased this Maine retreat, it needed to be entirely gutted due to its dilapidated condition. Built in 1966, the grounds were overgrown and the house was practically uninhabitable.  The homeowner commissioned Atlanta-based Terry Pylant of Historical Concepts, to bring the house back to life while retaining the original footprint.  Anne Genter of Friday & Genter Interior Design, who had worked with the owner for 20 years, was tasked with creating elegant yet relaxed living spaces.

“Though my specialty is American furniture and decorative arts, I’ve always appreciated the English country look, particularly that of the firm Colefax and Fowler,” said Anne. “As much as I like museums [she is a trustee of several], a house shouldn’t look like a museum. There can be museum-quality pieces, but I like something warmer, more comfortable.”

The owner’s passion for antiques began soon after she was married. The young couple needed to furnish their home, but they did not want the factory-made furniture available in the general marketplace. So they began collecting period country and English pieces. When she and her husband moved East, her eye developed more toward formal American material. She then began collaborating with her long-time friend Anne.

This article was originally published in the Summer/Autumn 2011 issue of Antiques & Fine Art magazine, which is affiliated with InCollect.com. 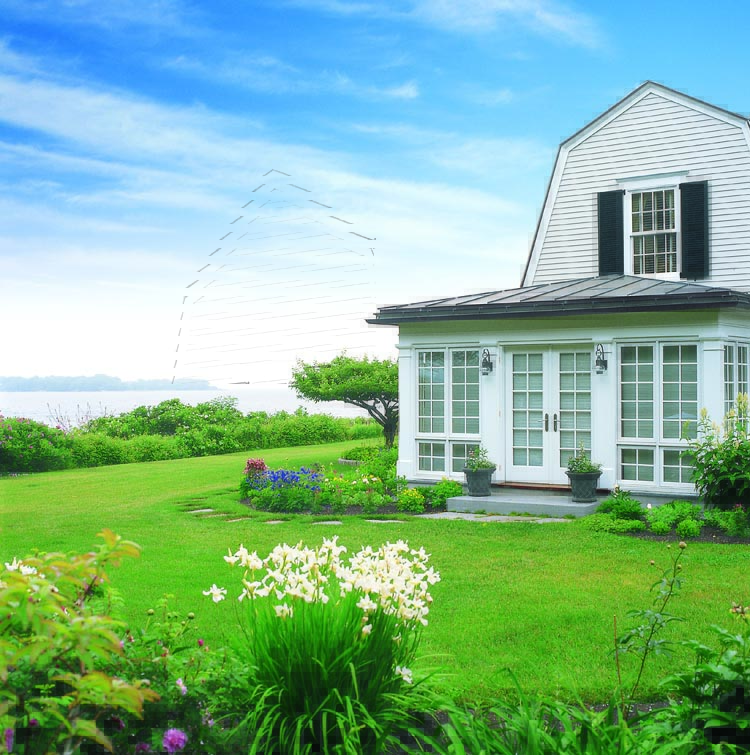 The house and gardens overlook an inlet along the coast of Maine. 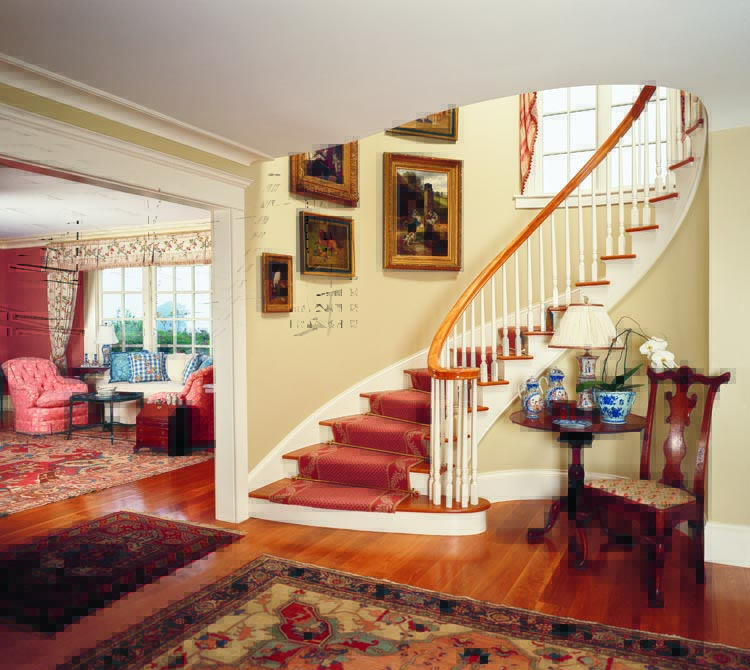 The grand staircase displays a portion of the collector’s nineteenth-century dog portraits. The Philadelphia triple-shell side chair is from Philip Bradley & Company Antiques. The table was acquired from Lynda Willauer Antiques. 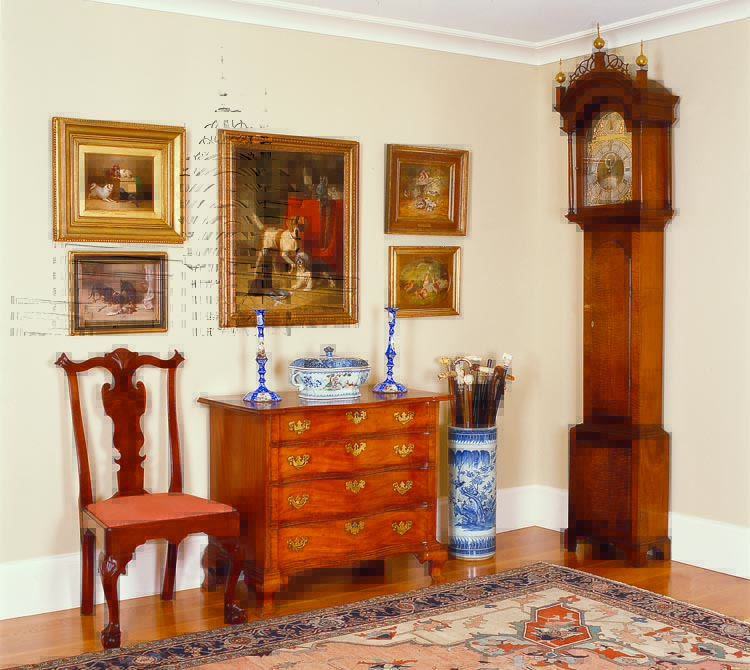 The canes – many featuring carvings of dogs or elephants – in the Chinese export umbrella stand are a mixture of family and acquired examples.  The diminutive serpentine, blocked-end Massachusetts chest-of-drawers is one of Albert Sack’s “Masterpiece” examples, and the Philadelphia side chair is from Philip Bradley. The tall clock, signed “Spaulding/Providence,” 1740-1760, descended in the owner’s family. 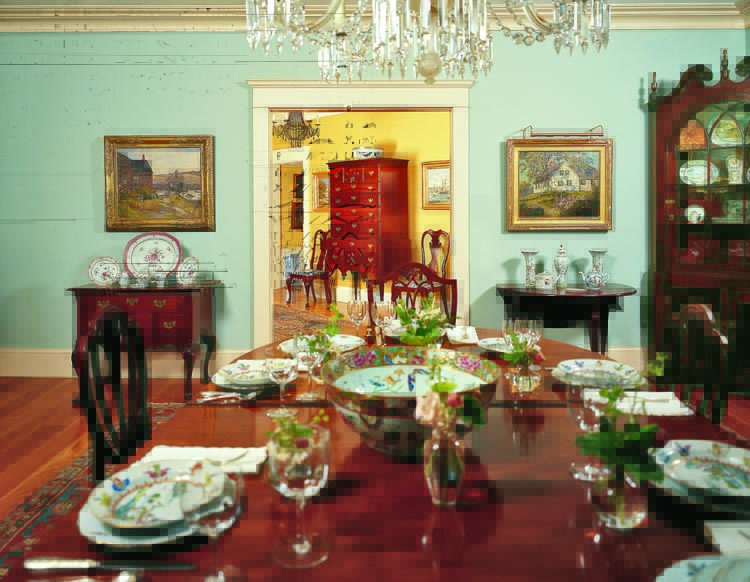 Edward Willis Redfield’s (1869–1965) Monhegan Home, signed and dated 1927, is balanced on the right wall by a house portrait by Boston School artist Abbott Fuller Graves (1859–1936). The Glastonbury or Colchester, Connecticut, high chest, is from Sotheby’s. It is flanked by two Philadelphia side chairs purchased at Pook & Pook Auctions. 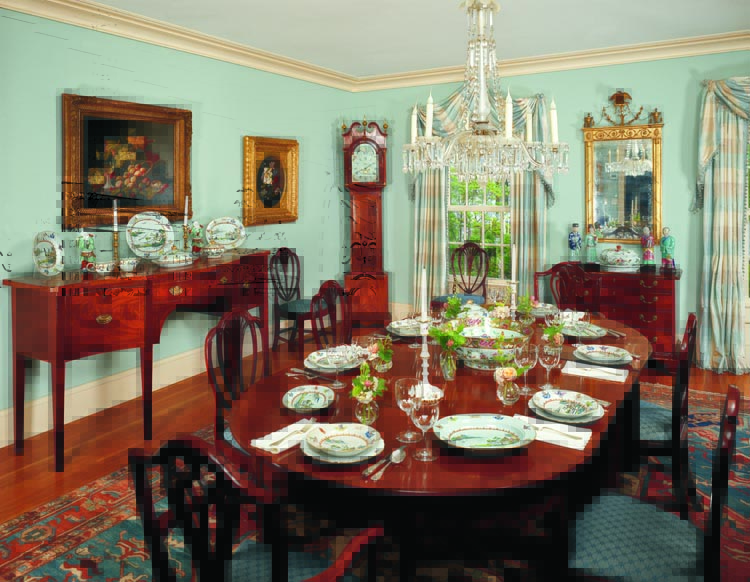 The table and chairs were acquired from Israel Sack, Inc.  The porcelain is part of the dinner service, circa 1796–1810, made for DeWitt Clinton and his wife Maria (Franklin) Clinton. It is one of the largest collections in private hands.  The Audubon flatware by Tiffany & Co. is circa 1871. A signed Severin Roesen (1815–1872) still life with berries and birds nest, directly above the sideboard, was purchased from Hirschl & Adler of New York. To the right is a signed Roesen floral still life from Godel & Company, New York. 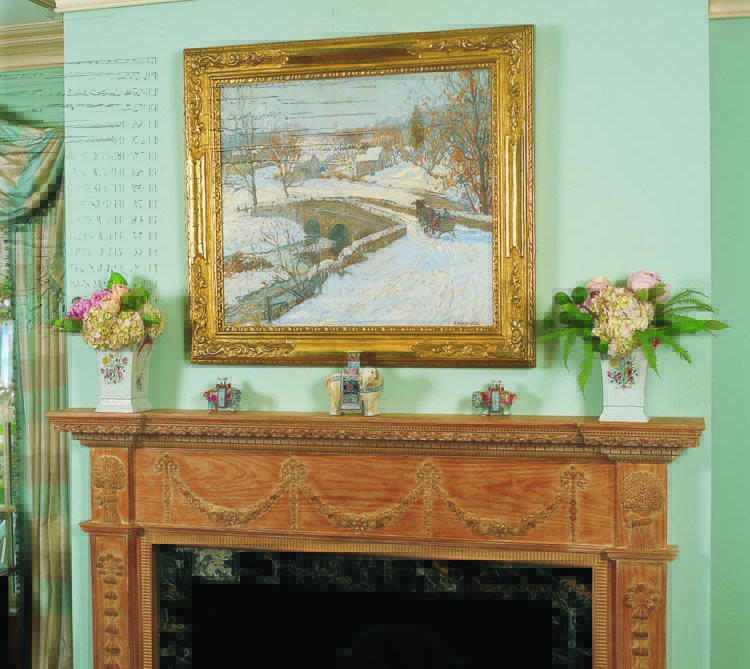 Sleigh in Winter, by New Hope School impressionist Edward Willis Redfield (1869–1965), hangs above one of several mantels retained when the owner and Anne renovated the interiors. Carved by local craftsmen and pickled, they are in the manner of Samuel McIntire of Salem, Massachusetts. 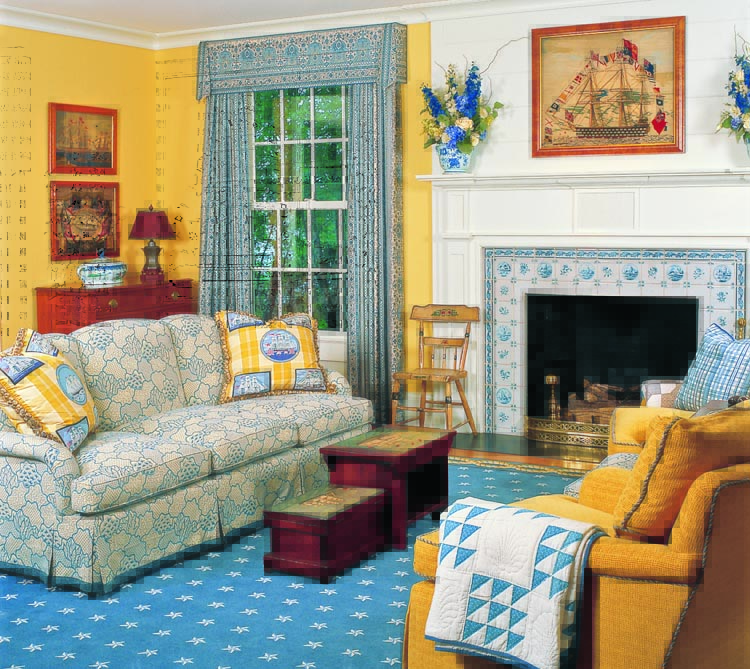 The bright yellows and blues are the perfect combination for the kitchen den. The rare wooly above the fireplace depicts a ship in “full dress.” A painted fancy chair adds a complementary touch of yellow to the room. The Federal chest-of-drawers behind the sofa displays two more woolies above. 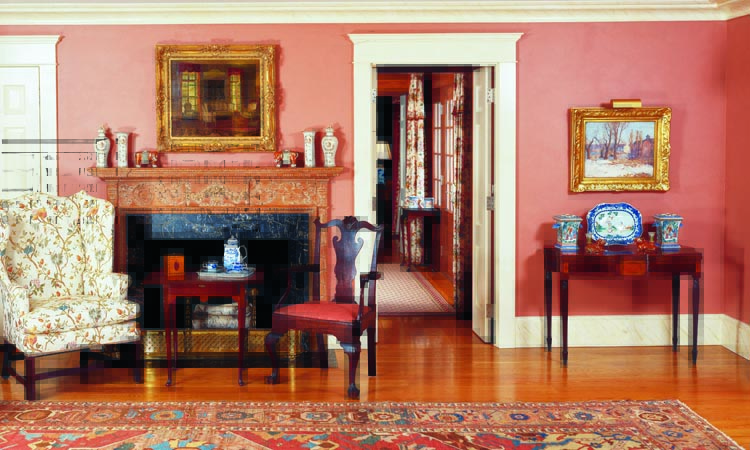 The carved fireplace is decorated with a Chinese export porcelain garniture set. The painting is Walter Gay’s (1856–1937) Le Canapé Château Du Bréau, from Debra Force Fine Art, New York. A Philadelphia shell-carved armchair is opposite a Massachusetts easy chair with a diminutive Massachusetts one-drawer table in between. A painting by John Folinsbee (1892–1972) hangs above a fine card table from Taylor Williams Antiques. The colors of the Serapi carpet complement the furniture and paintings. 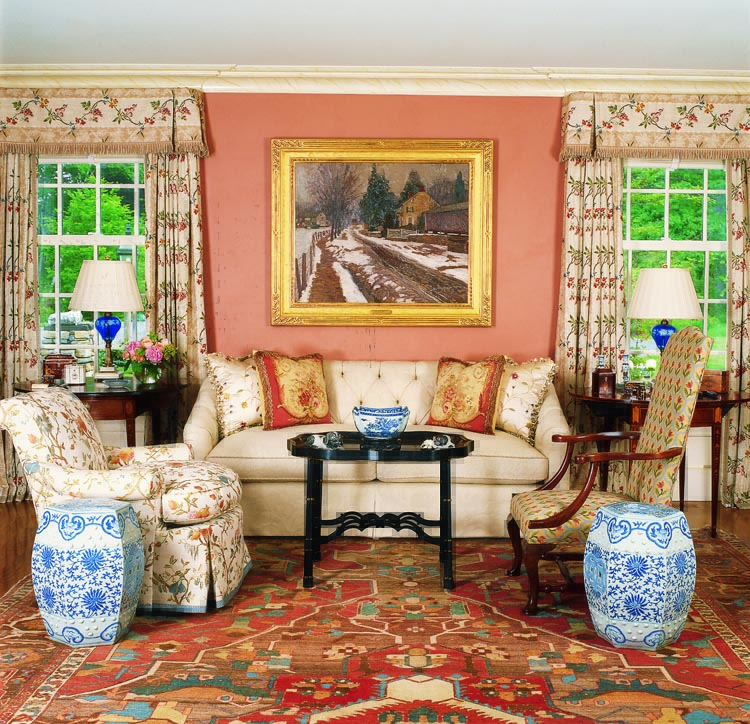 The solitary Road to the Village (1868) by Edward Redfield (1869–1965) hangs above the sofa. The Baltimore card tables flanking the sofa were purchased from C. L. Prickett and Guy Bush. The Queen Anne lolling chair is from Guy Bush. 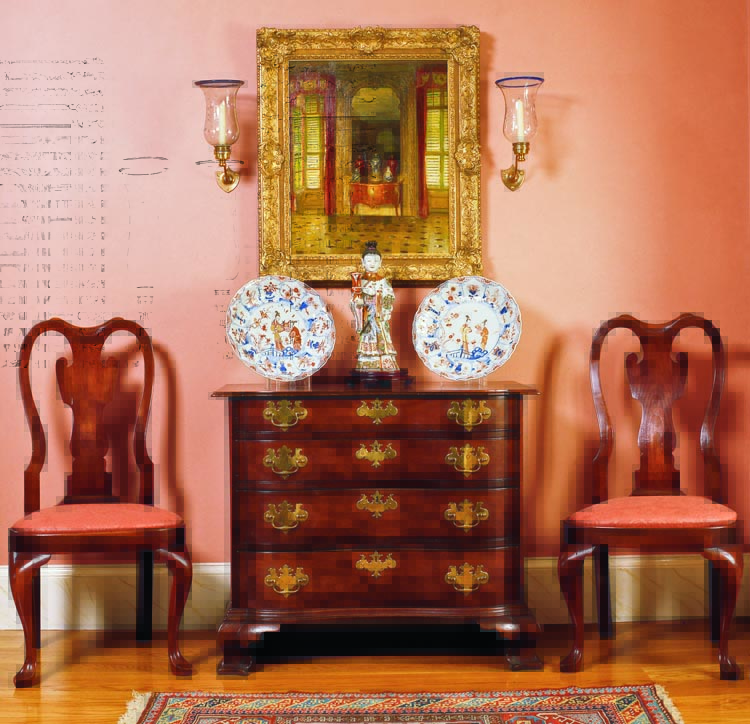 Imari plates and figure of a lady are displayed on a Massachusetts serpentine chest with blocked feet flanked by two Philadelphia side chairs. Walter Gay’s (1856-1937) image of a sunlit interior at Château Du Bréau was purchased at the Philadelphia Antiques Show from Adelson Galleries, New York. 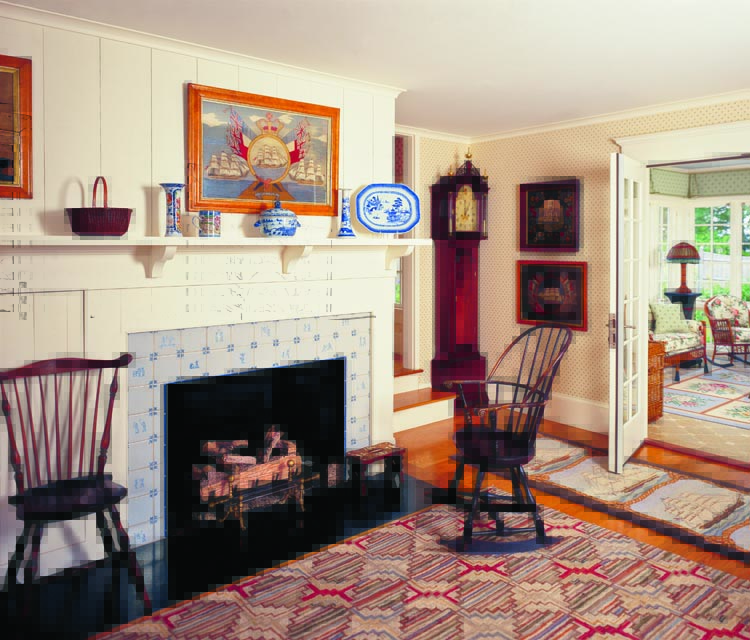 This Windsor rocking chair was purchased from Wayne Pratt, and was one of his favorite chairs. The clock dial is signed “Daniel Mulliken/Salem.” The woolies are among the sixteen in the collection.  The view extends into the porch, from which the gardens may be enjoyed while sitting in period Hayward Wakefield wicker furniture. 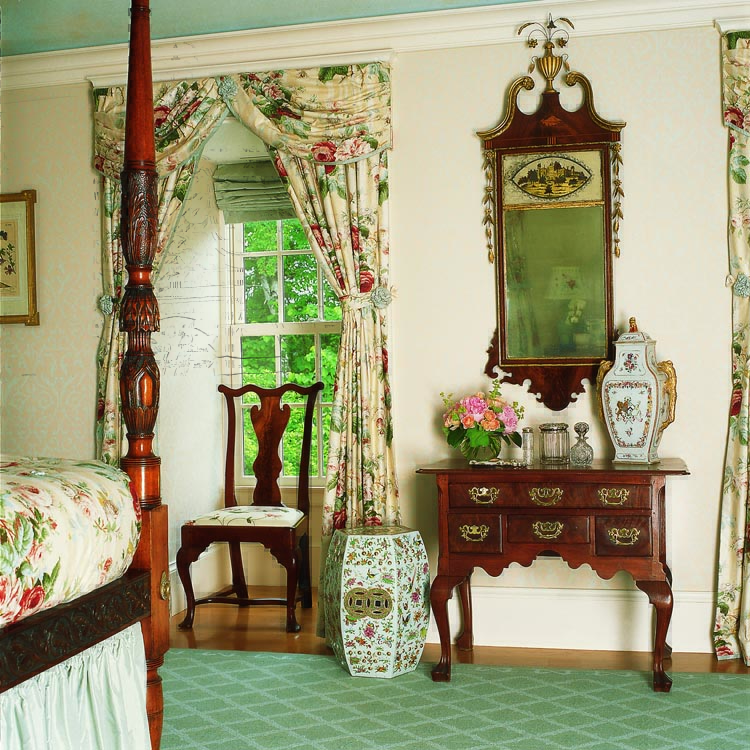 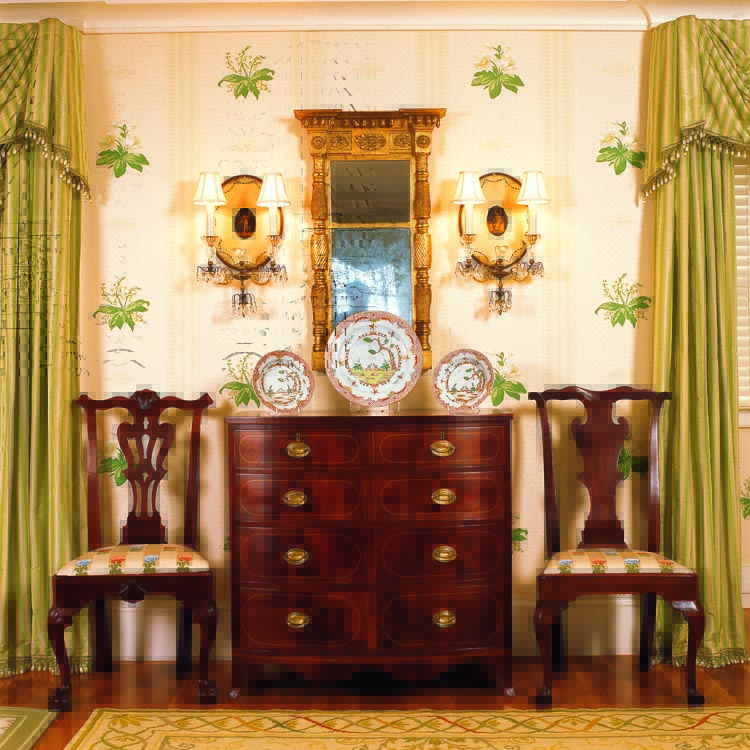 Each bedroom is furnished with antiques and art. Here is shown a Baltimore bow-front chest flanked by Philadelphia
side chairs. 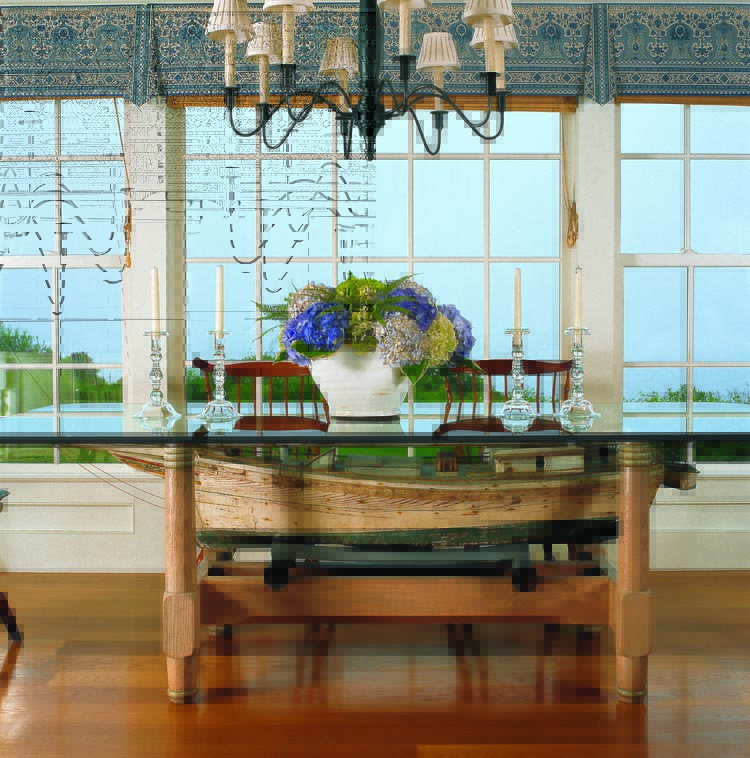 The owner enjoys most of her meals at this table in the kitchen overlooking the bay. Hyland Granby Antiques created the table around a nineteenth-century pond model of a Chesapeake Bay skipjack.

This beautiful home reflects many years of collecting, each piece with a special memory. “So much of collecting is founded on relationships. Though her acquisitions have slowed, the owner and Anne continue to consult with one another and make visits to antiques shops and shows along the eastern seaboard.” ~ InCollect.com