Celerie Kemble and her mother, Mimi McMakin, founder of Kemble Interiors, are two of my favorite designers, and when Celerie’s latest book, Island Whimsy: Designing a Paradise by the Sea, was released this month, I devoured every single page! Island Whimsy recounts her deeply personal and creative journey of designing Playa Grande Beach Club and bringing this labor of love to life. Today we will peek inside this spellbinding book which provides a glimpse into Celerie’s enchanted world… 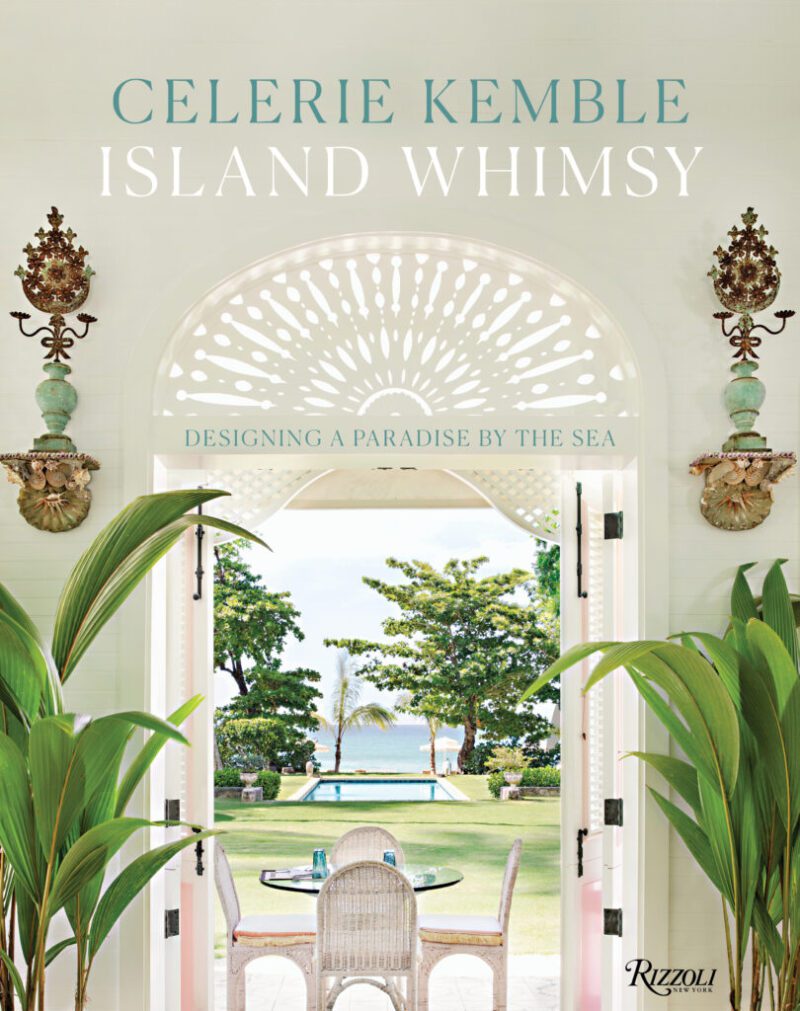 When Celerie Kemble and her husband traveled to the Dominican Republic in the summer of 2004, she fell head over heels when they stepped onto the sand of Playa Grande… which happened to be for sale. The couple had dreamed of building a group of vacation homes with friends and families, somewhere beautiful and wild, but not too remote. A place where they could build a cluster of houses centered around a shared clubhouse, which would perhaps turn into a boutique when the homes weren’t in use. What had been a recreational fantasy soon became reality.

“I couldn’t help imagining my own children frolicking in the waves, my family and friends gathered around a bonfire, counting constellations and mosquito bites, walking up the beach at the end of the night to a home we could return to year after year,” said Celerie. 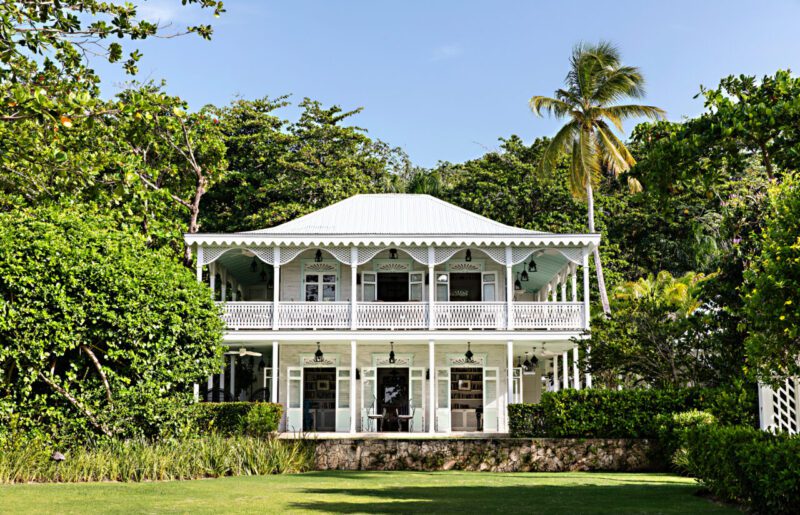 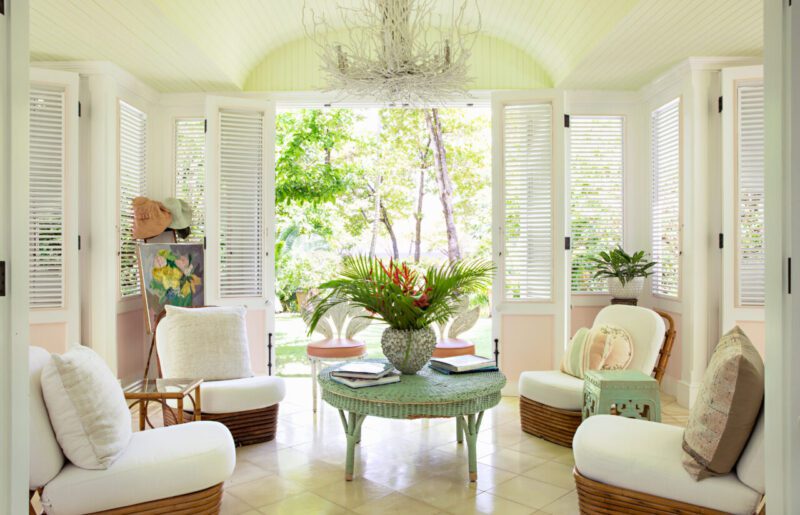 Over the course of a decade, Celerie designed and constructed Playa Grande. It became a home away from home, an island retreat encompassing a little group of houses gathered around a lawn, a pool overlooking the ocean, and a garden full of tropical flowers – all surrounded by the beauty of the jungle.

The chapters of Island Whimsy are organized around the different ways Celerie sought to weave her family’s story into the larger landscape of Playa Grande and to provide inspiration, joy, and respite to all who come. Throughout this lovingly crafted book, ideas abound for anyone decorating a house at the beach or fantasizing about spending time in one. Celerie shares inspiration for creating a sense of openness to the sea, sand, and sky; offering places to wash sandy feet or perfect viewing spots for a sunset-saturated drink; and infusing spaces with invitation, welcome, and magic. 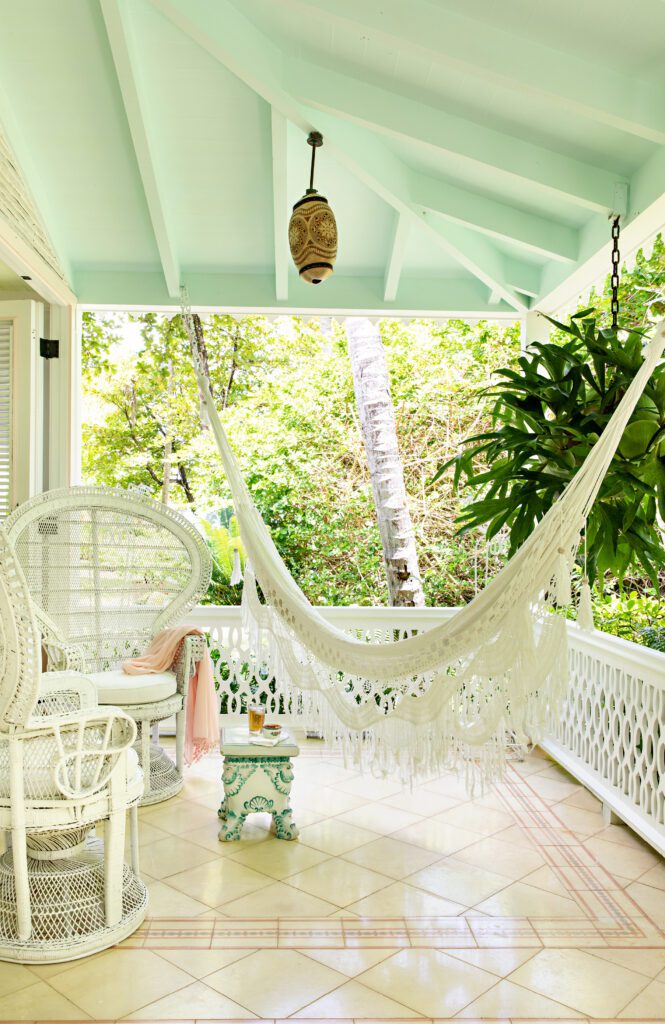 Celerie grew up on the enchanted island of Palm Beach in the 1970s. Her great-great-grandparents were some of the first settlers back in the late 1800s when it was still swamp and sawgrass. Her childhood home was a wood-shingled Gothic former church decorated by her mother, the legendary designer Mimi McMakin, founder of Kemble Interiors.  Decked in chintz, wicker, and Porthault linens, Celerie’s childhood home was elegant yet casual… the silver was never polished, but there was a many-generations-deep collection of it.

The home was surrounded by the lake on one on one side and the jungle on the other,  and Celerie’s days were spent in a damp, sandy bathing suit and Coppertone sunscreen. At night, she fell asleep to the sound of bamboo creaking outside her windows and frogs singing in the trees.

“Nothing was palatial or pristine or gilded the way the great houses of Palm Beach are, but it was – and is – a monument to romantic chaos that I have come to think of as the embodiment of home,” she said. “When I began to imagine building homes at Playa Grande, I envisioned a similar kind of enchantment: a wild, romantic place that was also modest in scale and appropriate to the location.” 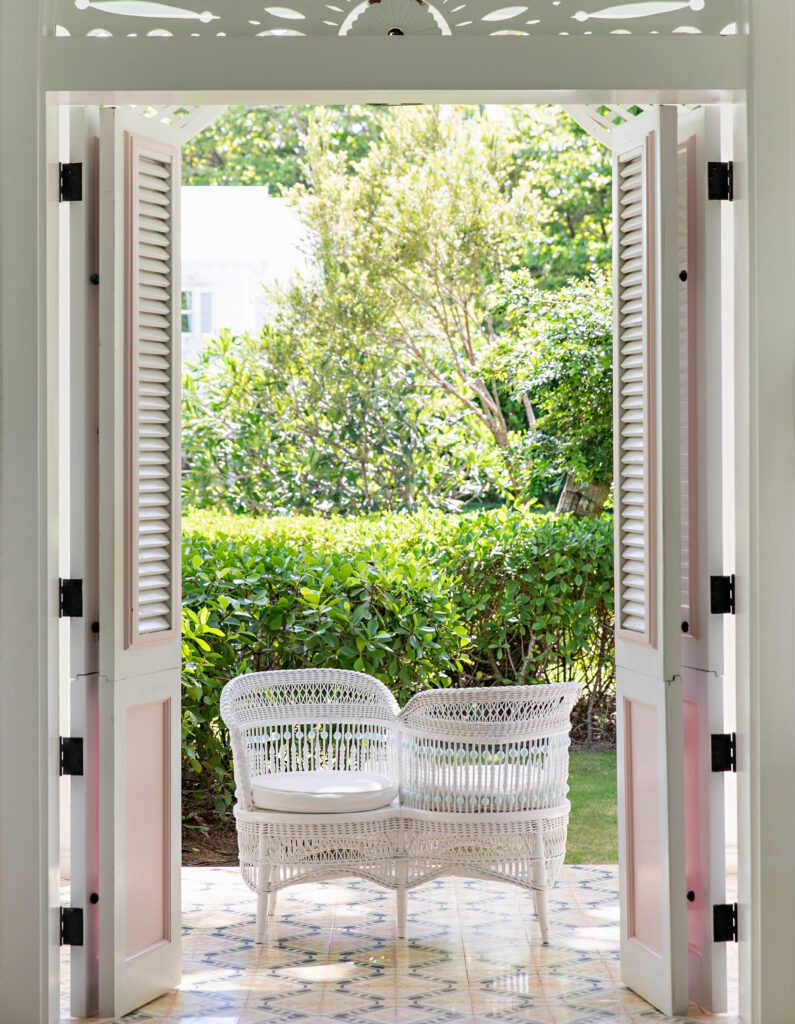 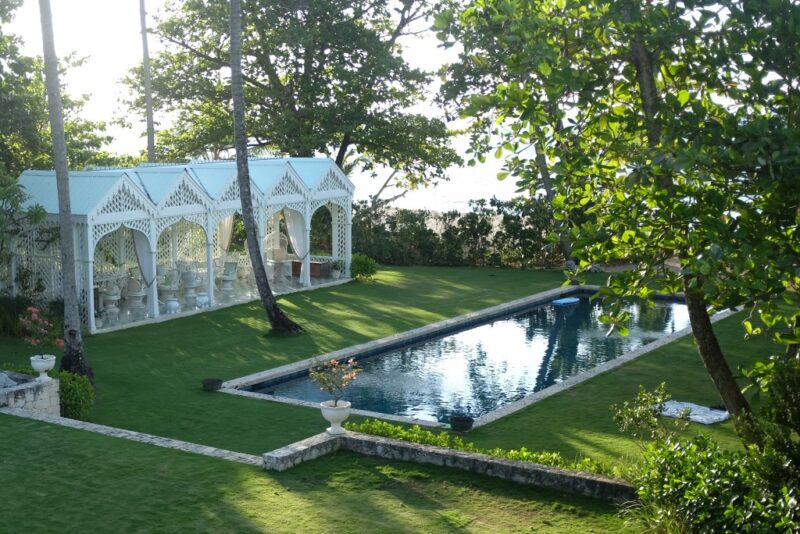 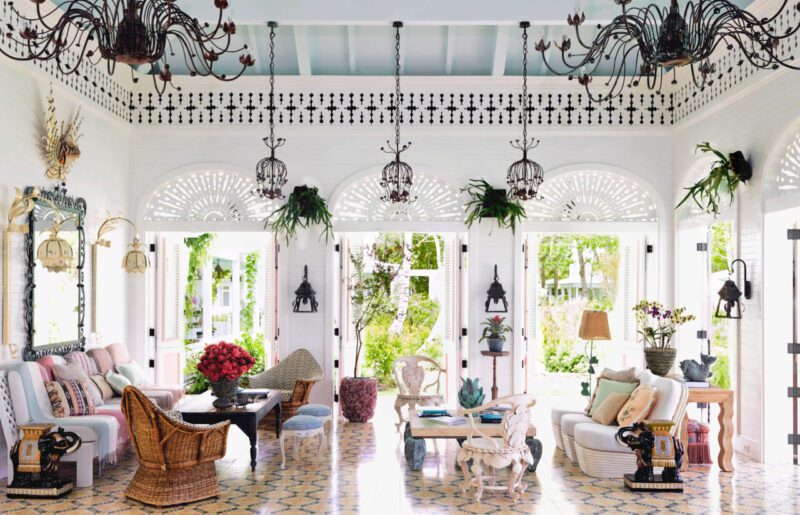 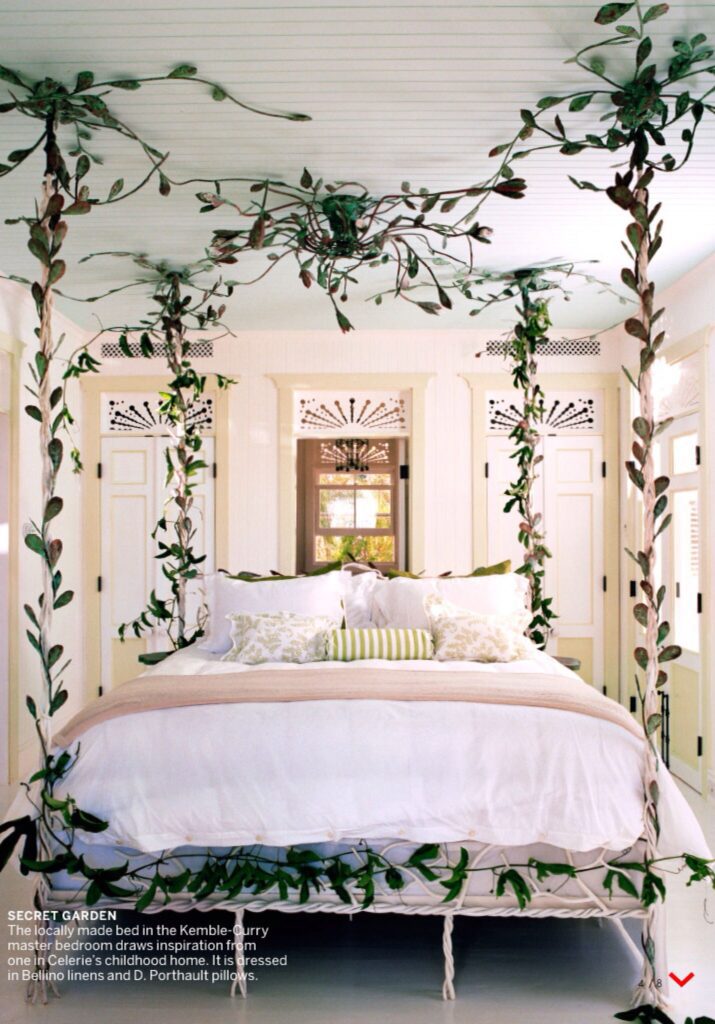 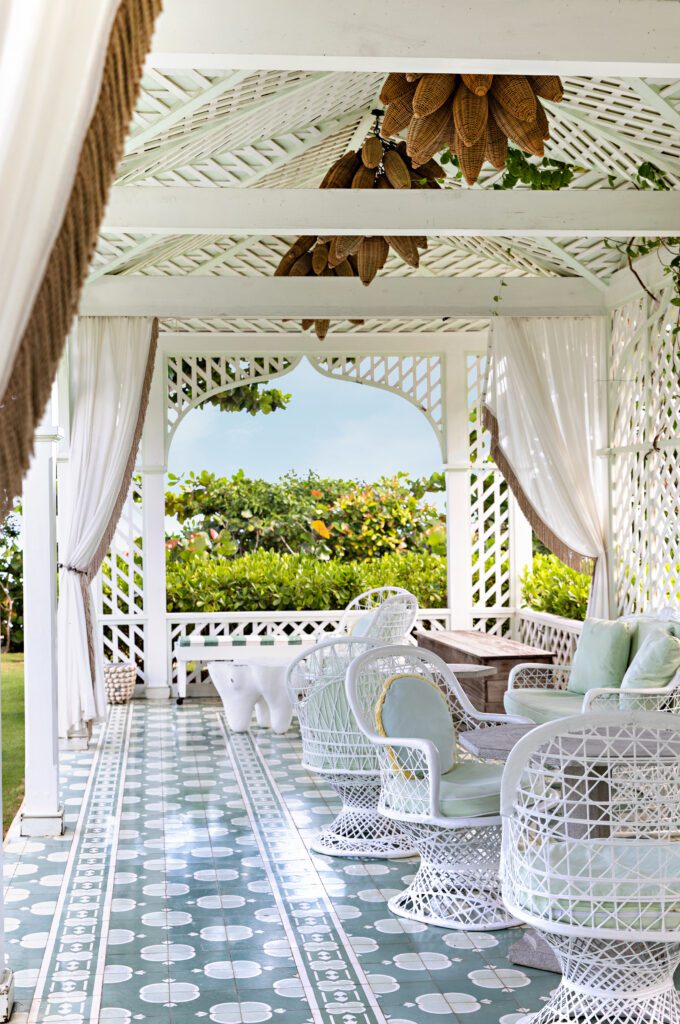 Celerie says, “A home exists first and foremost to make its inhabitants feel safe and comfortable – to tell stories about the things they love and the times they’ve shared, and to help inspire them to do new things. But the best houses also tell a story about the place itself, the landscape, and the larger culture within which its inhabitants live.”

Island Whimsy: Designing a Paradise by the Sea is available through Amazon. You can read more about the Playa Grande Beach Club and made reservations here.

ABOUT THE AUTHOR:
Celerie Kemble is a partner in Kemble Interiors, Inc., a decorating firm founded in 1982. Celerie has been featured in Architectural Digest (including as an AD100 Designer), Elle Décor (where she is a perennial member of the A-List), House Beautiful, Vogue, Harper’s Bazaar, The Wall Street Journal, Town & Country, Veranda, and more. Her previous design books include Black and White (and a Bit in Between): Timeless Interiors, Dramatic Accents, and Stylish Collections and Celerie Kemble: To Your Taste: Creating Modern Rooms with a Traditional Twist. She lives between Palm Beach and New York with her three children.

You can read more about Celerie and her mother, Mimi McMakin via the following articles by The Glam Pad:

And stay tuned as we will soon tour the newly renovated Gasparilla Inn, designed by Kemble Interiors!

« We Love You, and Breakfast In Bed, BUT… The Mother’s Day Gift Guide
Jane Austen Fans Will Love Henry’s Townhouse! »