After training with designers Ashley Whittaker and J.D. Bell in New York, Allison Allen knows how to spot a diamond in the rough. When her husband, Beau, inherited his grandparents’ Atlanta home, it was in such a state of disrepair that the family thought it was a teardown. Allison orchestrated a whirlwind transformation that took just two months – including a kitchen renovation! – updating the 67-year-old home without knocking down a single wall.  She began with a classic blue and white palette, incorporating Chinoiserie accents as a nod to Beau’s grandmother Louise’s love of Asian antiques. The result is a treasured family heirloom, full of memories and charm. Photography by Hector Manuel Sanchez; styling by Elly Poston Cooper, and text by Elizabeth Passarella for Southern Living. 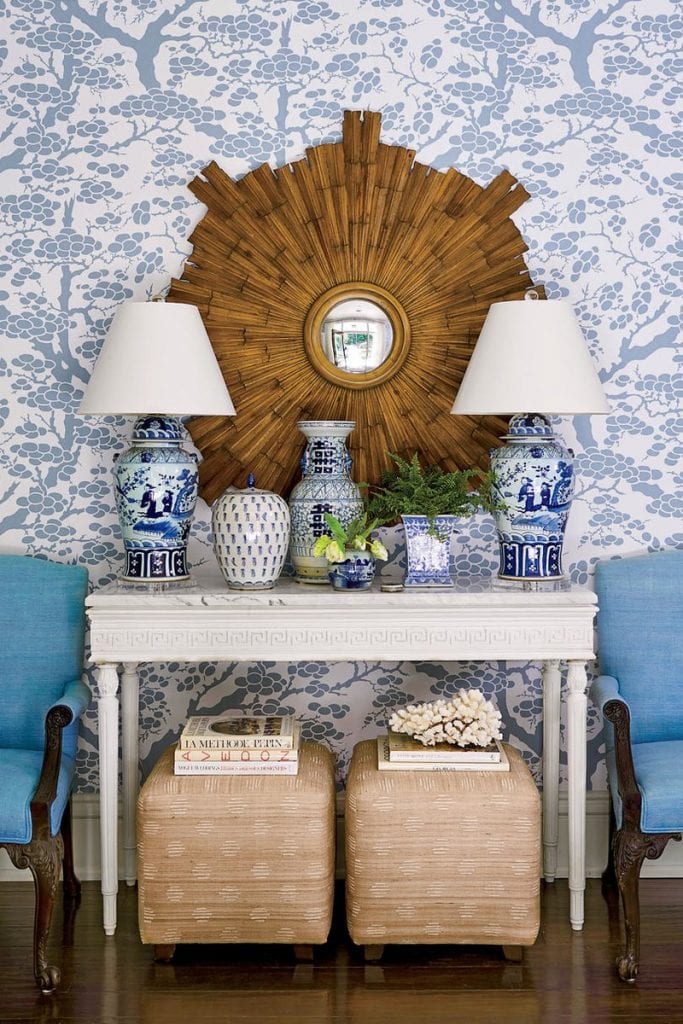 The large entry was designed to maximize views from the front door straight to the backyard. Louise was a dedicated gardener, and “the entry was her favorite place in the house to sit,” says Allison, who swapped out the old, peeling wallpaper panels for a modern, bonsai-like pattern (Arbour by Meg Braff Designs). She also replaced wall-to-wall carpeting with new hardwood floors. 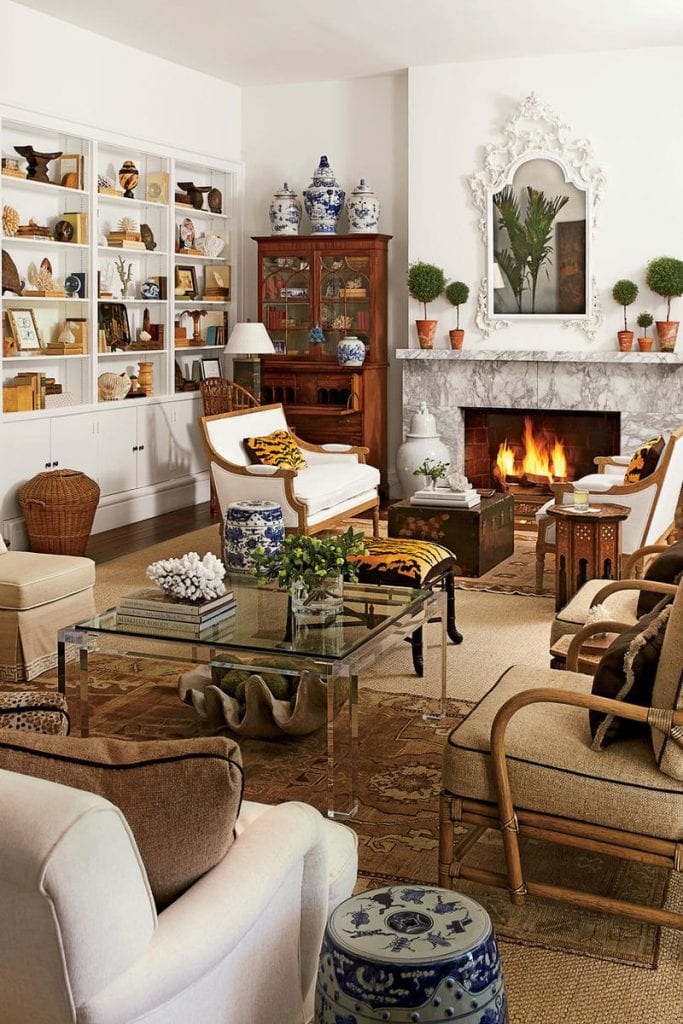 One of Allison’s favorite rooms in the house, this sunken space has a 13-foot ceiling and grand scale, which made filling it tricky. “Many antiques looked like doll furniture in here,” she says. “Originally, the room had been oriented around a piano, and a couch blocked the windows.” After a lot of trial and error, Allison devised two seating areas that fit the room’s scale. Allison toned down a fanciful antique gold mirror with white paint. 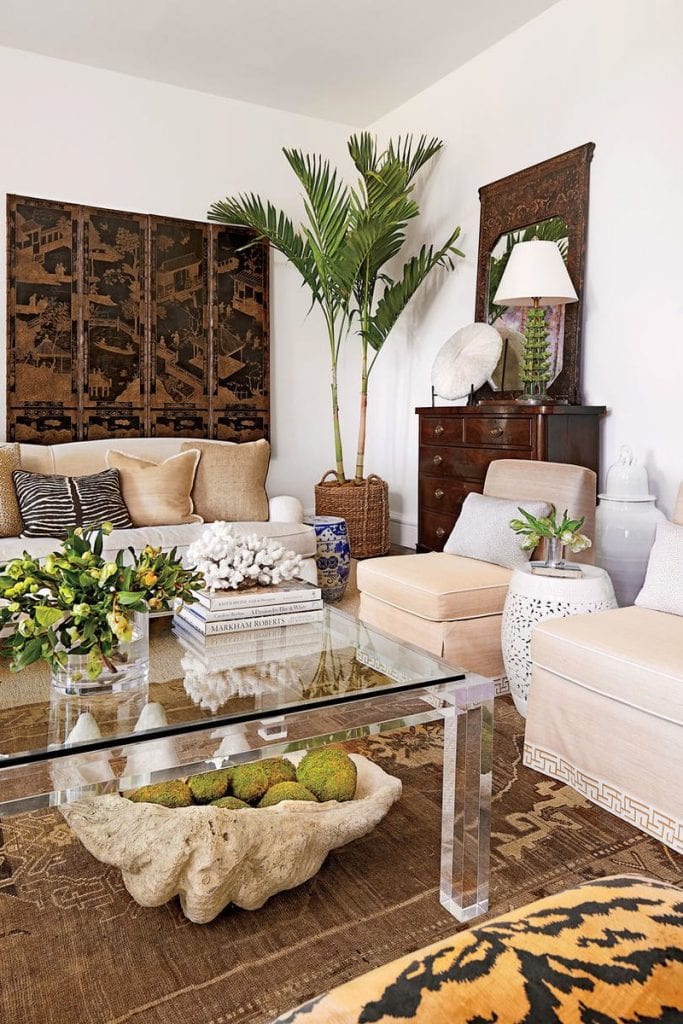 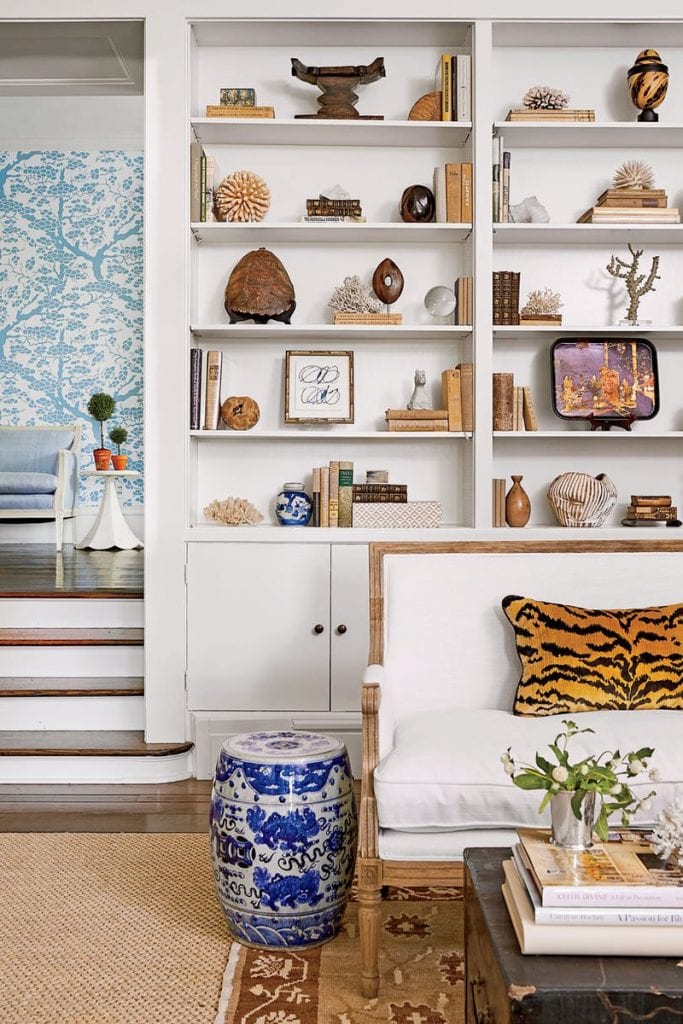 Allison made sure this antique-filled room felt comfortable and defined. Starting from the floors up, she layered oriental rugs on a larger sisal rug to define the two separate sitting areas. 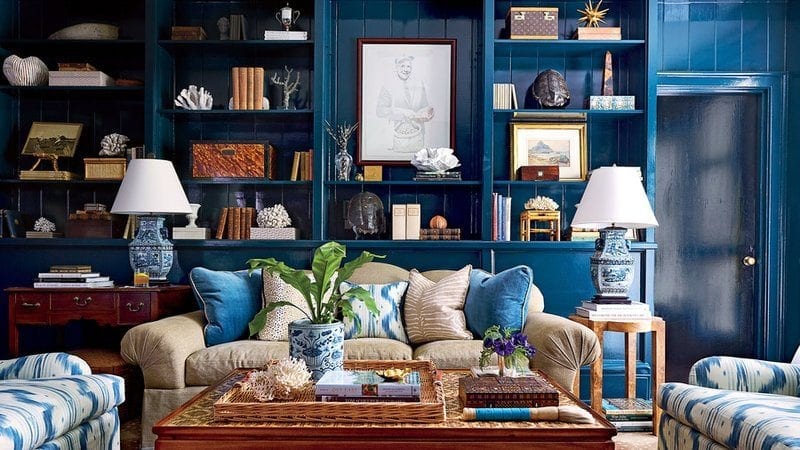 Allison made this buttoned-up, wood-paneled family room reflect their tastes by going all out in various shades of blue. She painted the walls in Farrow & Ball’s Hague Blue, and she also re-covered the furniture passed down from her mom. The patterned chairs are Pierre Frey’s Toile de Nantes, 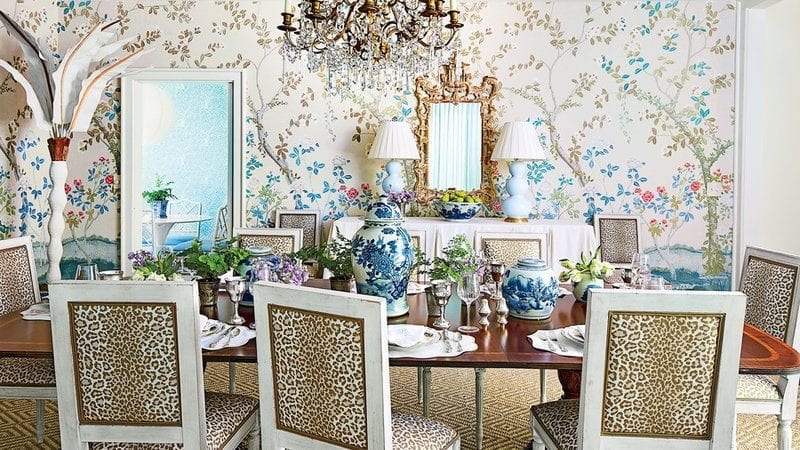 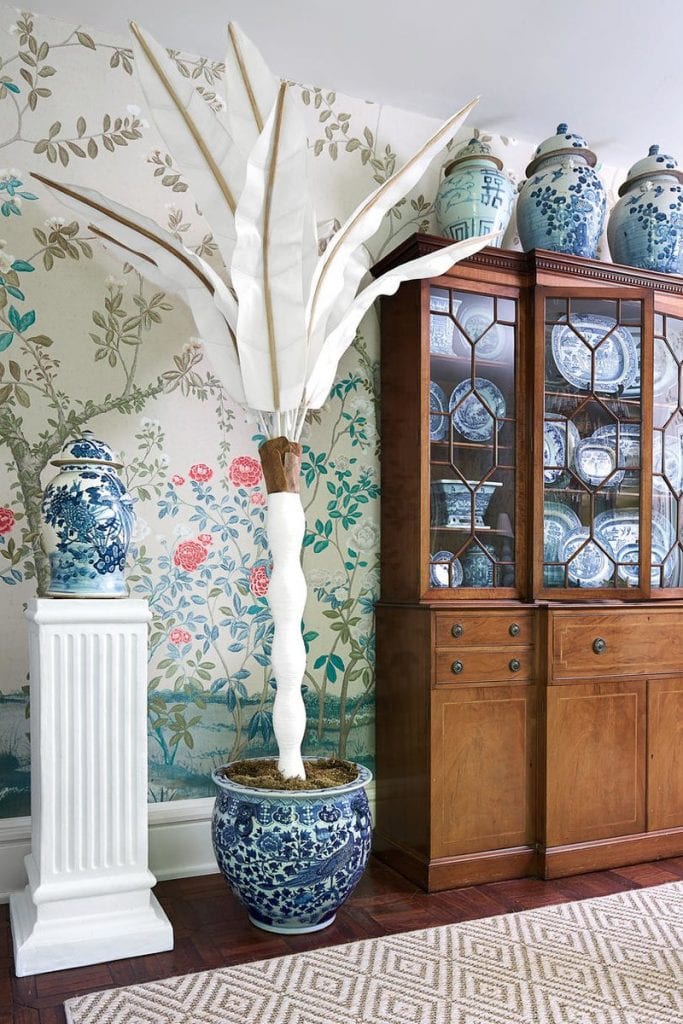 Like her mother and grandmother, Allison collects blue-and-white transferware and ginger jars, which provide continuity through the house. 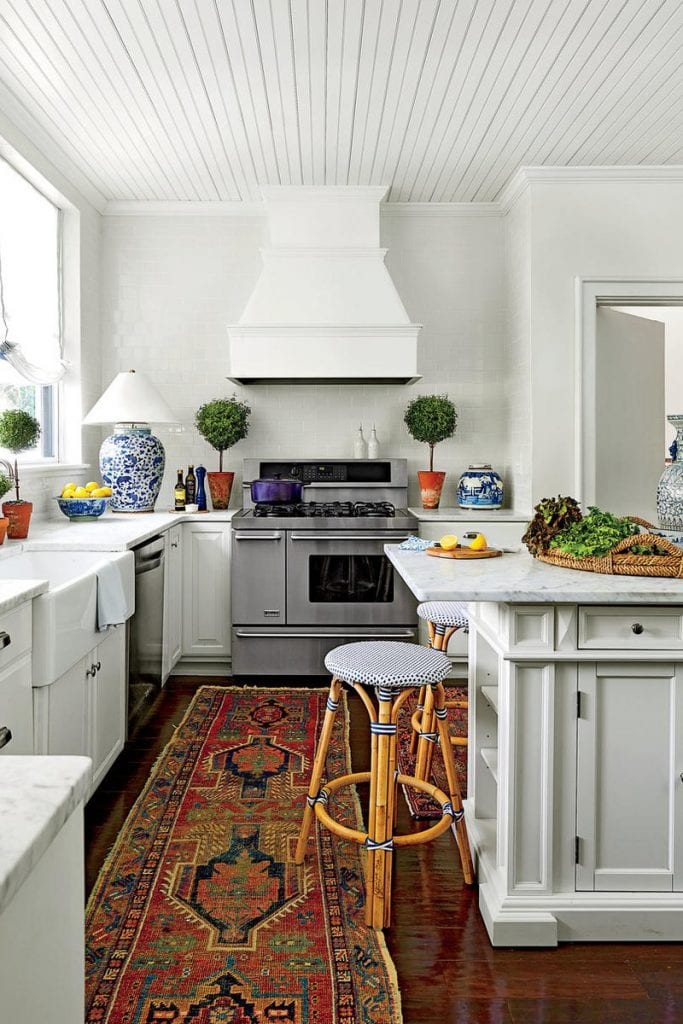 While they didn’t move any walls in the kitchen, the couple did bring the room into the modern era by removing soffits, upper cabinets, and asbestos-contaminated linoleum floors. 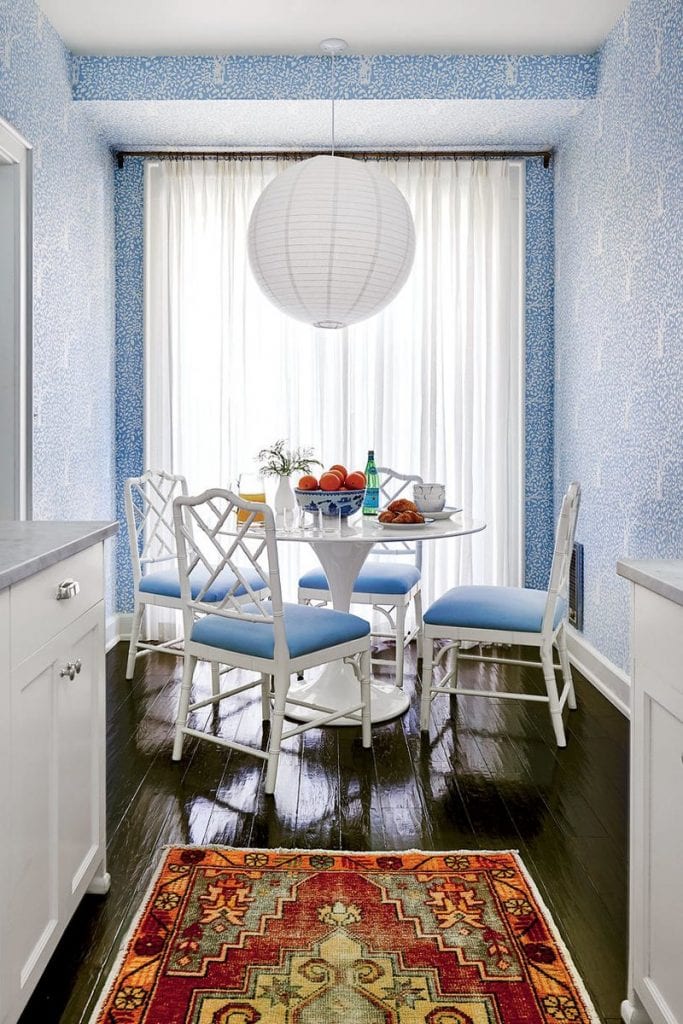 Subtle chinoiserie elements such as the set of Chippendale chairs—and, of course, the blue-and-white wallpaper (Quadrille’s Arbre de Matisse)—help keep the breakfast room consistent with the rest of the house. “It’s where my husband grew up eating with his grandparents, and I can picture them sitting there. Now, it’s where we sit and eat,” says Allison. Because the ceilings are high, I wanted a large, modern light fixture.” She found this one for under $20 at paperlanternstore.com 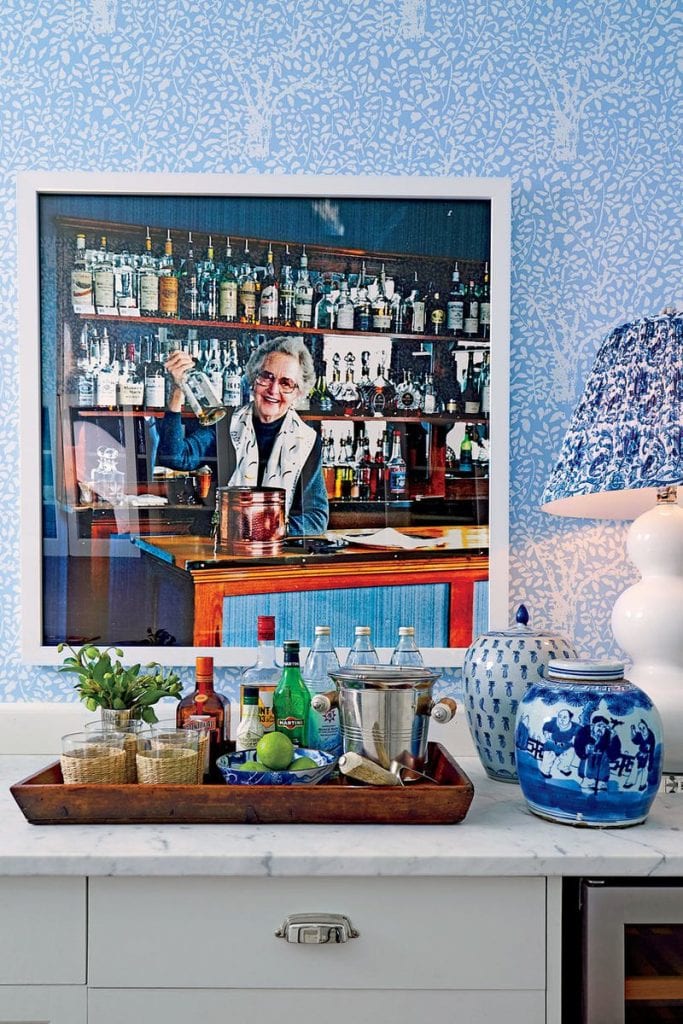 Allison found this picture of Louise making a cocktail. “I had the photo blown up and gave it to Beau as a Christmas gift last year,” she says. It fits perfectly with decor and is a reminder of the loved-ones who used to live there. 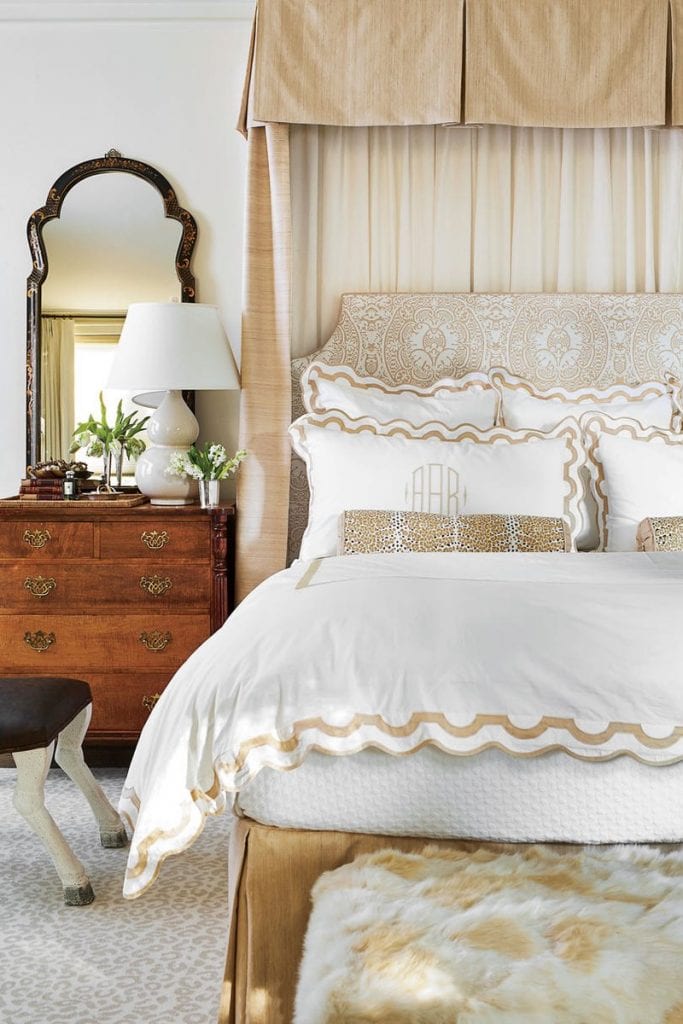 The master bedroom serves as a nice pause in the home’s blue-and-white color scheme with quiet, serene tones and animal prints that add texture. “These prints are neutrals, but I have to restrain myself from using too many,” she notes. 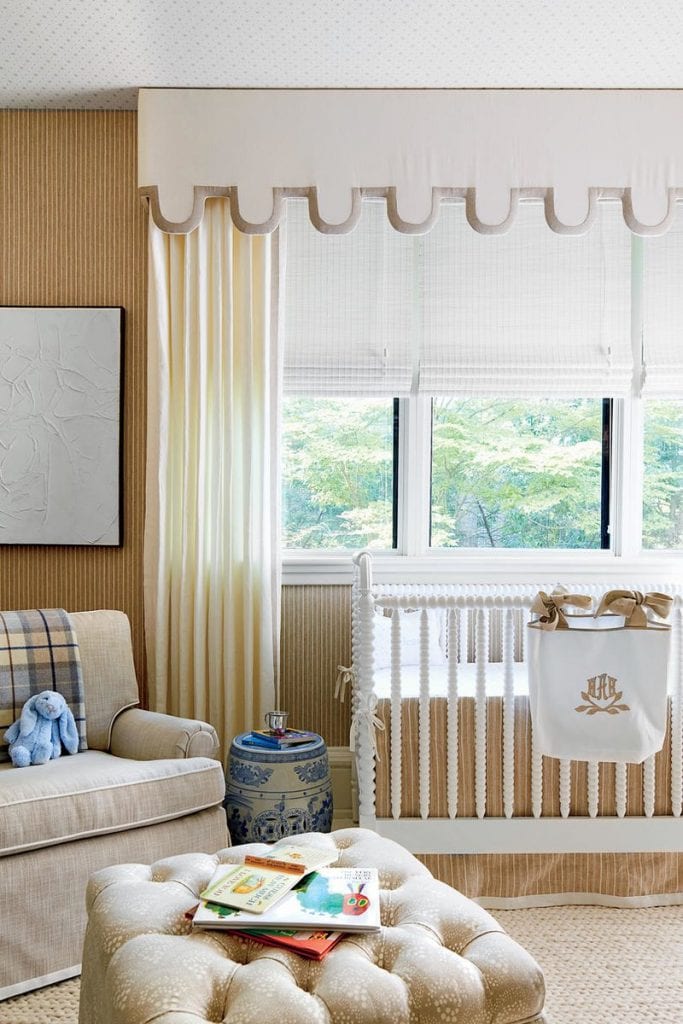 When Allison found out she was having a boy, friends asked if the nursery would be all blue. “No! I’d done enough in the rest of the house,” she says. Her goals were to keep the room calm, sophisticated, and adaptable as her son grows. The walls are covered in a striped linen that she had backed with paper and stain treated (to protect from sticky fingers). “Fabric-covered walls feel so cozy and inviting,” she says. Allison got the classic Jenny Lind crib from The Land of Nod.

This feature originally appeared in the January 2018 issue of Southern Living. For more of Allison Allen’s incredible style, you will want to follow her on Instagram.

« Christmas with Victoria
Anti-Trends for 2018 »