Jessica Griffith grew up playing backgammon with her dad, yet she was disappointed in the overproduced, machine made boards that were available.  She decided to fill the void by producing beautiful handmade custom boards, thus her company Nine Fair was born. Jessica eventually quit her job in finance and focus on the growth of her custom backgammon board business, operating out of her family’s charming home on the island of Nantucket.

The Nantucket Whaling Captain’s house was built in the 19th century for Captain William M. Barrett, and the Griffiths purchased it in 2006. Jessica says her mother is solely responsible the home’s enchanting decor, brimming with Chinese export plates, chintz, needlepoint pillows, and wicker furniture. “She is really talented and has a great eye,” Jessica said. “She’s been a wonderful resource for me with Nine Fair, too, and offers lots of constructive feedback regarding my designs.”

Photography by Adrianna Glaviano for Vogue, written by Alexandra Macon. 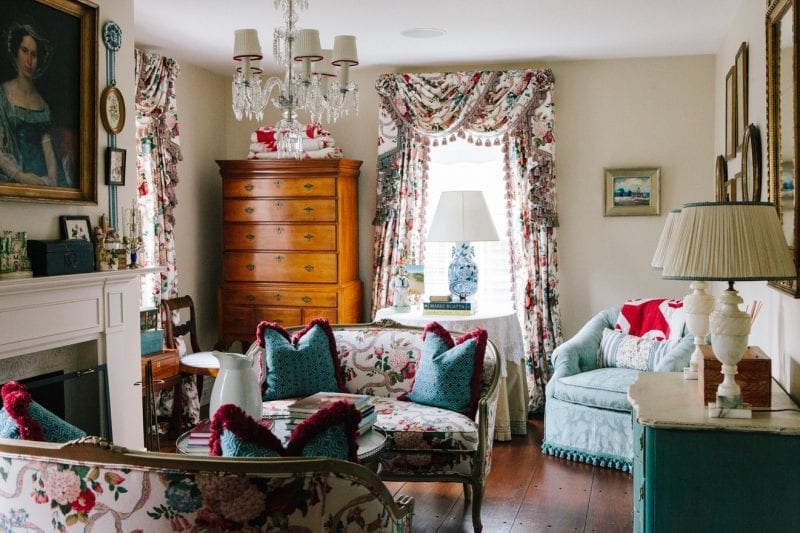 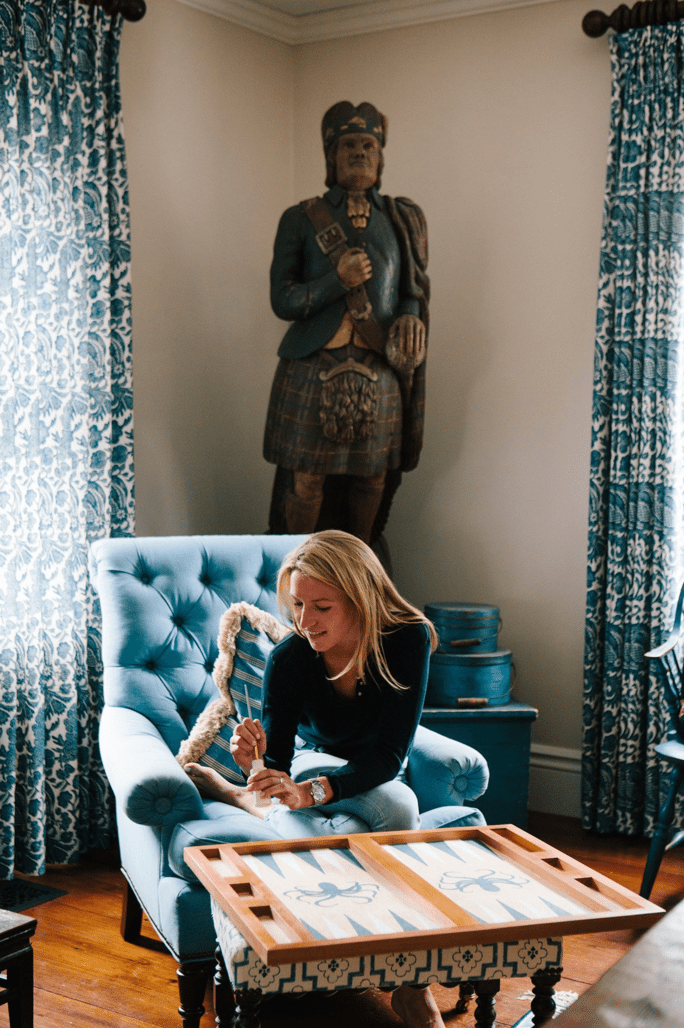 Jessica working on a Nine Fair board in the kitchen. Behind her, there is a large figurehead from the front of a ship. He is really unusual because figureheads are typically female. He is English and dates back to roughly 1865. 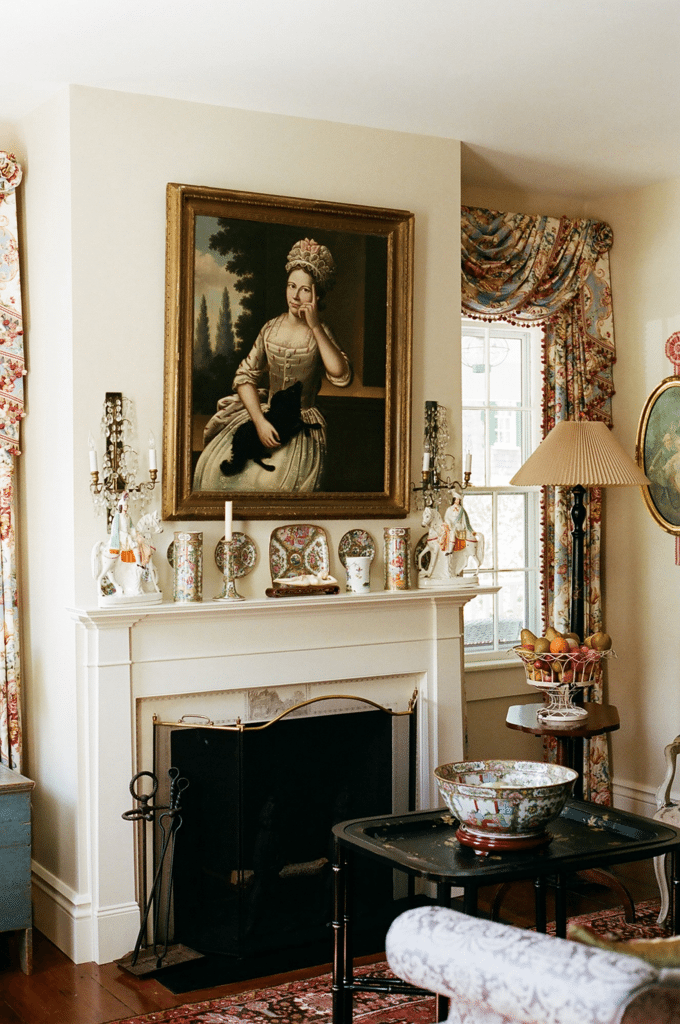 The living room is filled with Rose Medallion porcelain. This pattern is from the early 19th century and is one of two Chinese export patterns that Jessica’s family collects, the other being blue-and-white Canton. The portrait above the fireplace depicts Queen Elizabeth. 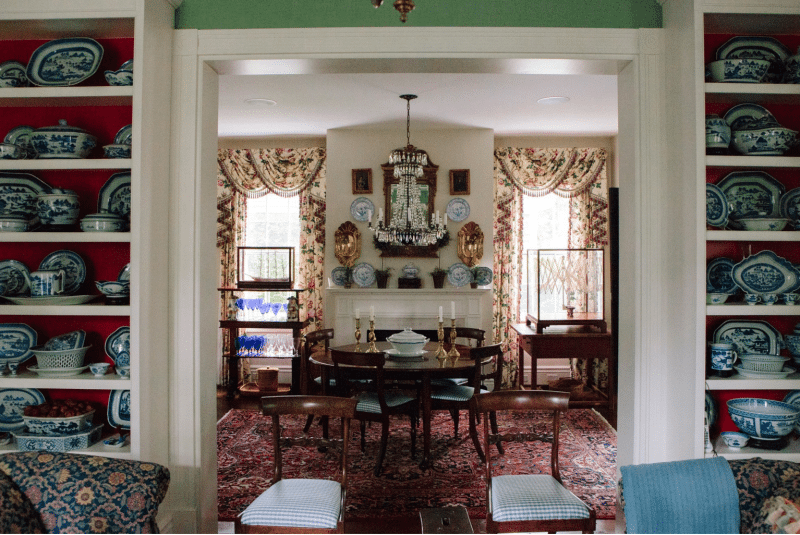 The library shelves are filled with Canton. The dining room table is an American piece purchased at a Rafael Osona auction on the island. Resting on the table there is a Leeds feather-edge tureen. The chandelier is Swedish from the late 1800s. To the right, there is an ivory and bone yarn swift in the glass case that dates back to the 19th century. 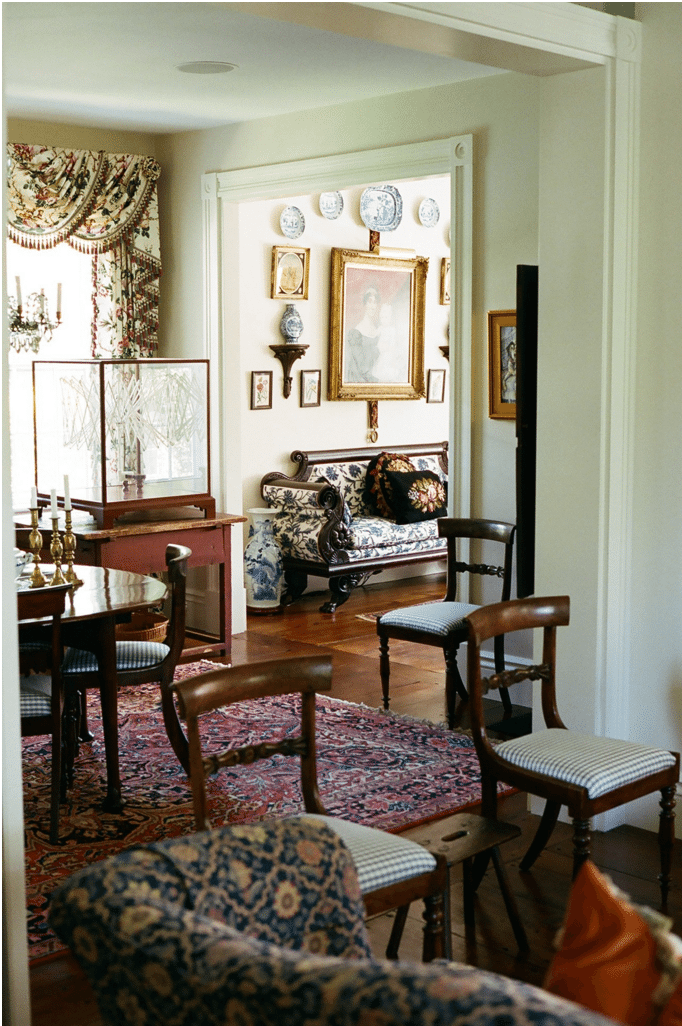 A photograph from the library, peeking into the dining room and foyer. 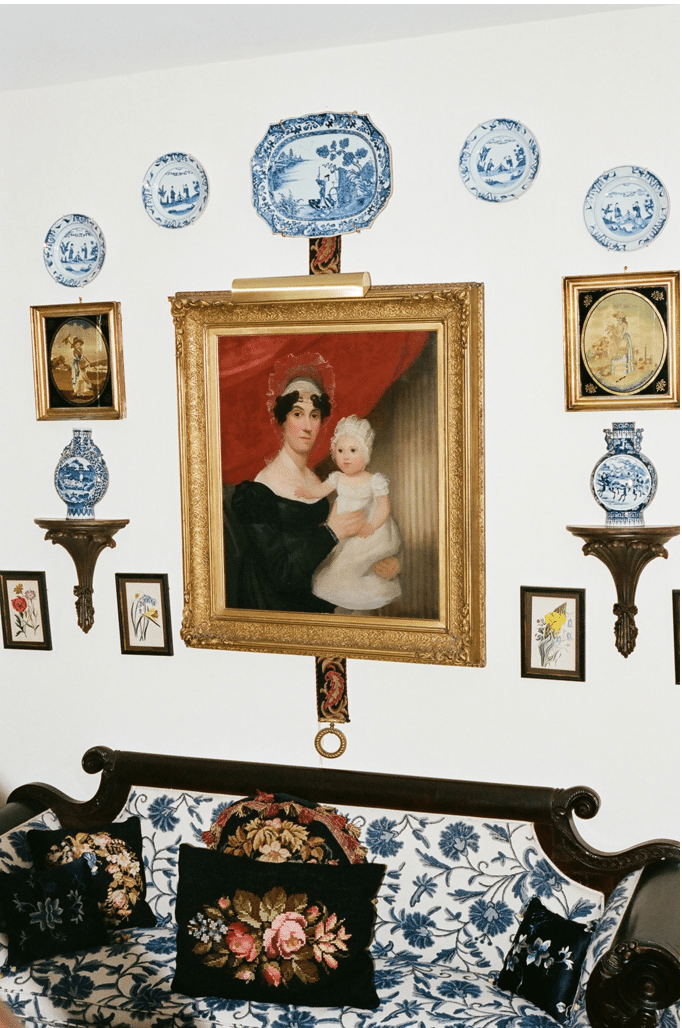 In the foyer, there is an Empire couch finished with blue-and-white crewelwork and antique needlepoint pillows. Above the couch, there is a portrait depicting a mother and daughter from the late 1800s. The portrait is surrounded by Chinese export, intermingled with floral prints and etchings. 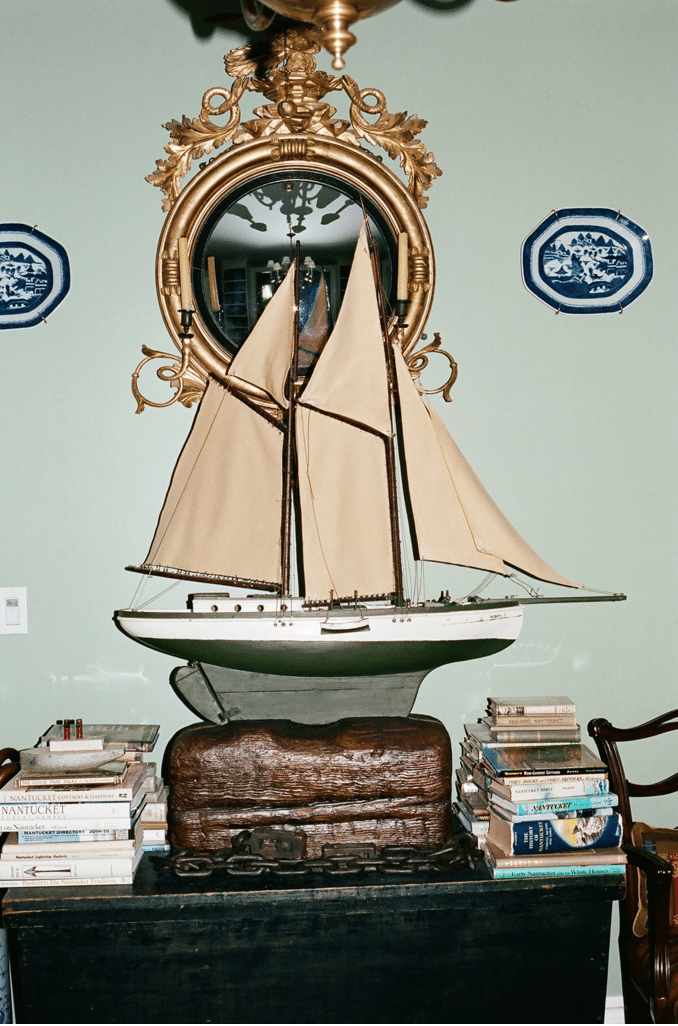 The mirror behind the American pond boat is an American bullseye mirror from the late 19th century and features an eagle at the top and shells on the bottom. 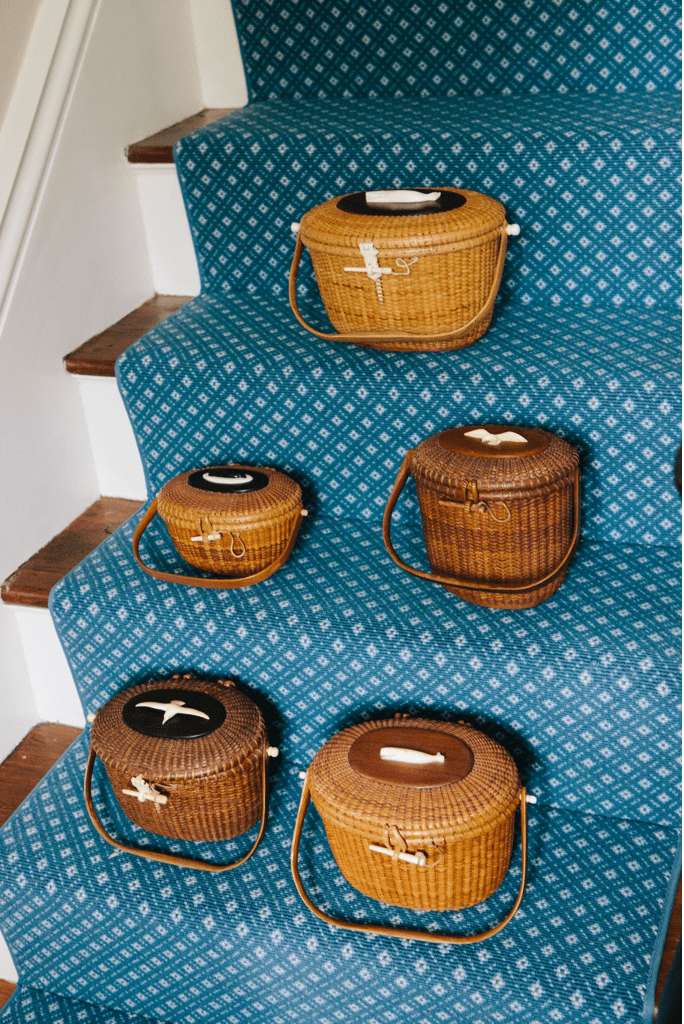 Jessica’s family has been collecting Nantucket lightship baskets for more than 20 years. These baskets are from the 1960s to 1980s and were woven by José Reyes. 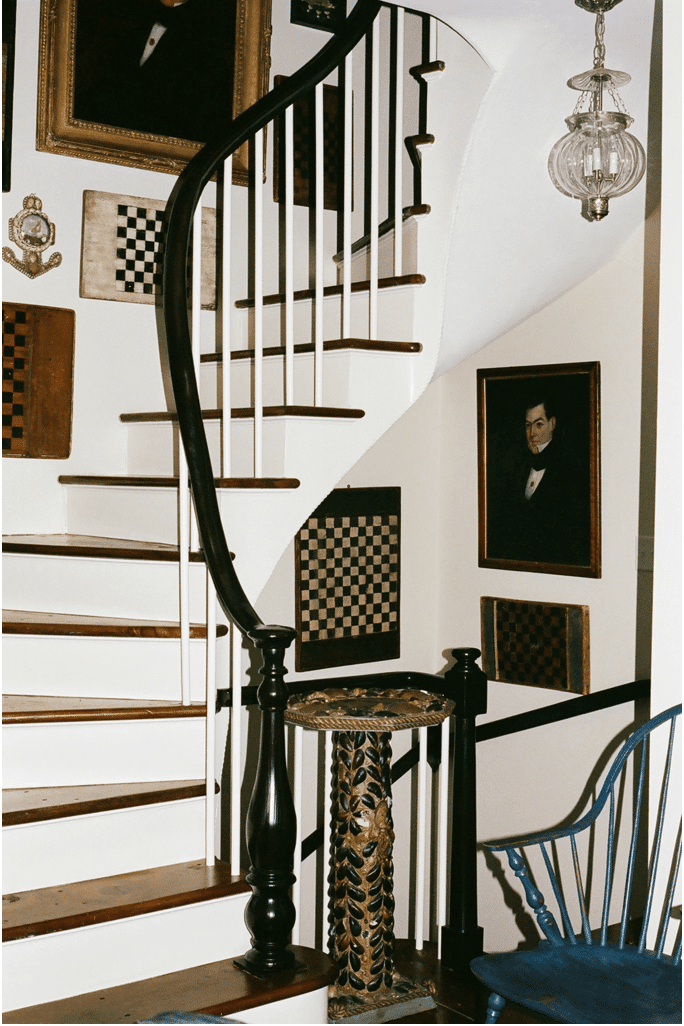 The back staircase wall features a sea captain’s portrait and American chessboards and checkerboards—clearly game boards are a family thing! The shelled pedestal ties in nicely with the sailor’s valentines and nautical motif throughout the house. 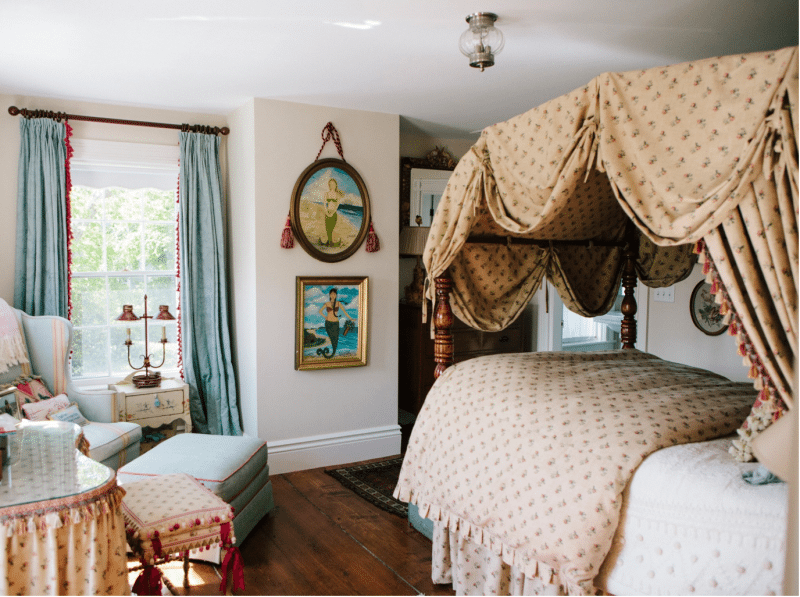 Jessica’s room features two contemporary portraits by an artist from Pennsylvania, Kolene Spicher. The wing chair in the corner is covered in Scalamandre fabric and has a Nantucket Looms blanket over the back. Jessica’s canopy, duvet, vanity, and French stool are covered in a rose-print fabric by Waverly. 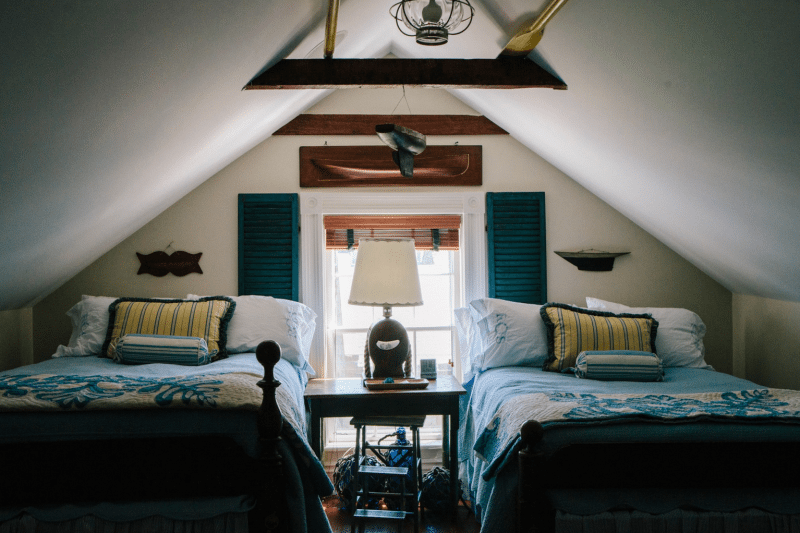 The third-floor bedroom is a guest room. This room is very nautical—there are rowing oars and more American pond boats hanging from the beams. 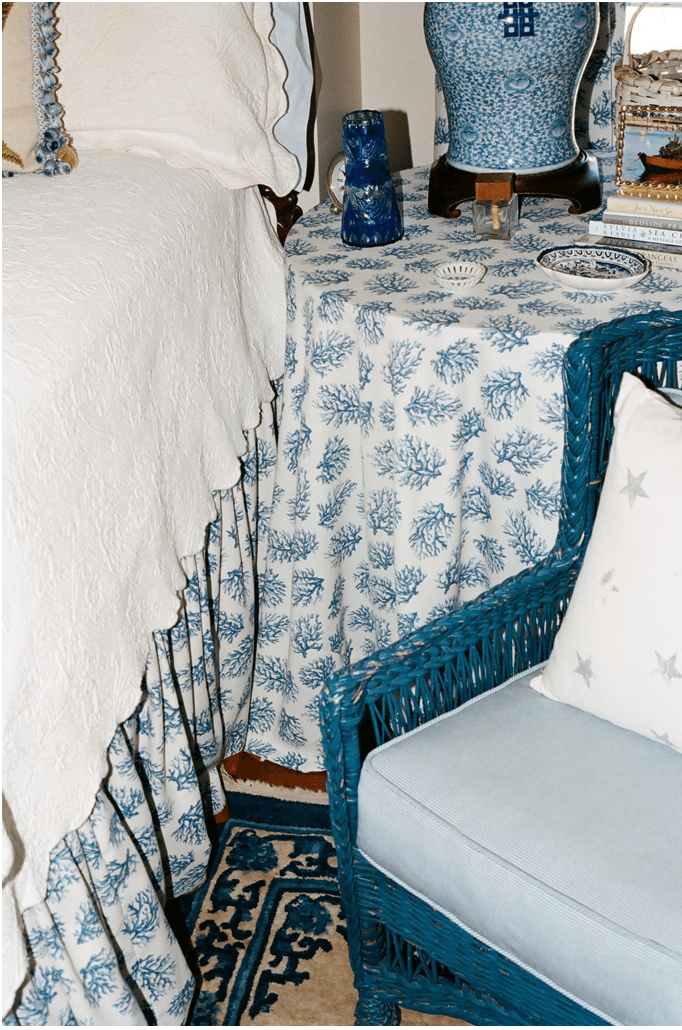 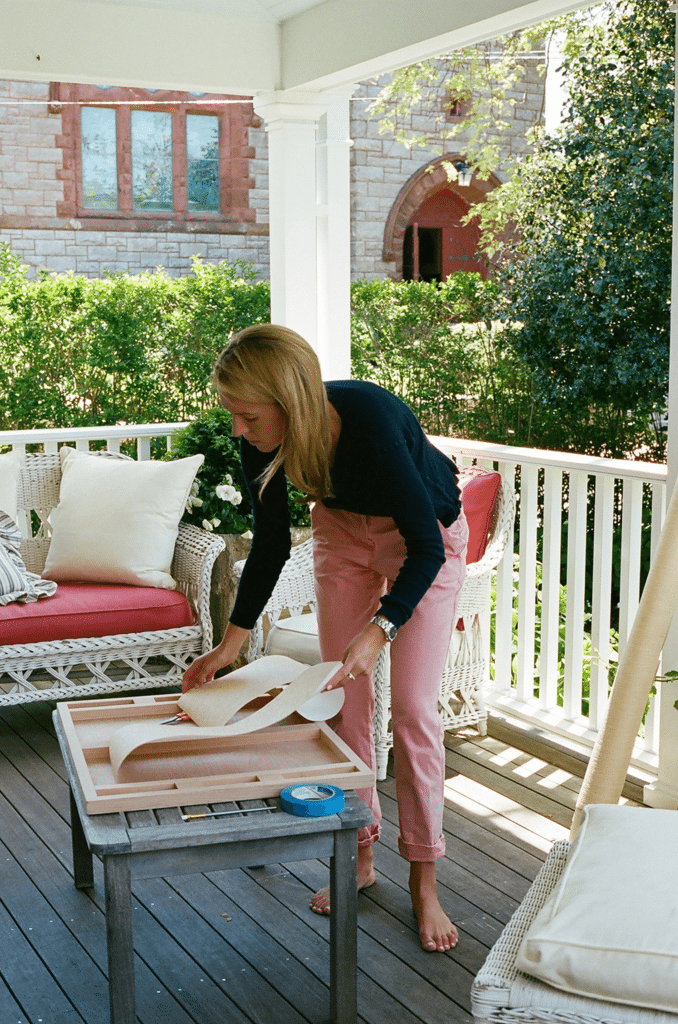 Jessica does the majority of her work on the porch. The porch ceiling is painted in a Haint blue. The wicker furniture has been collected and replaced over the years, with the newest addition being a wicker rocker she found at the Nantucket Thrift Shop for $15 (what a steal)! The porch is a great space to work, socialize, and enjoy the gardens. 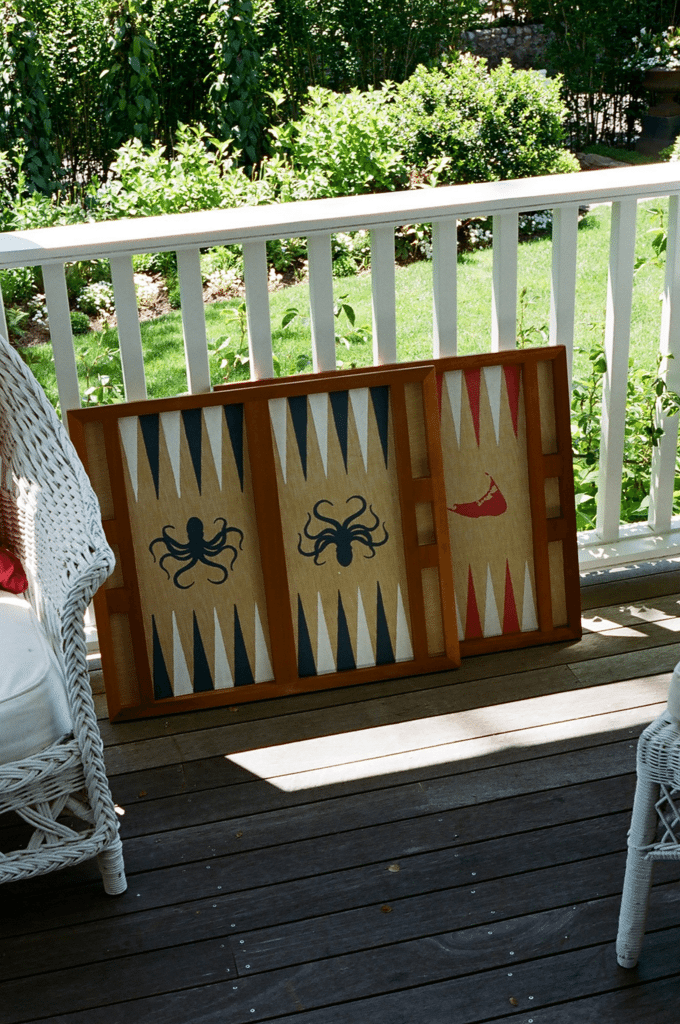 These are two of the original products and the house-staple backgammon boards. 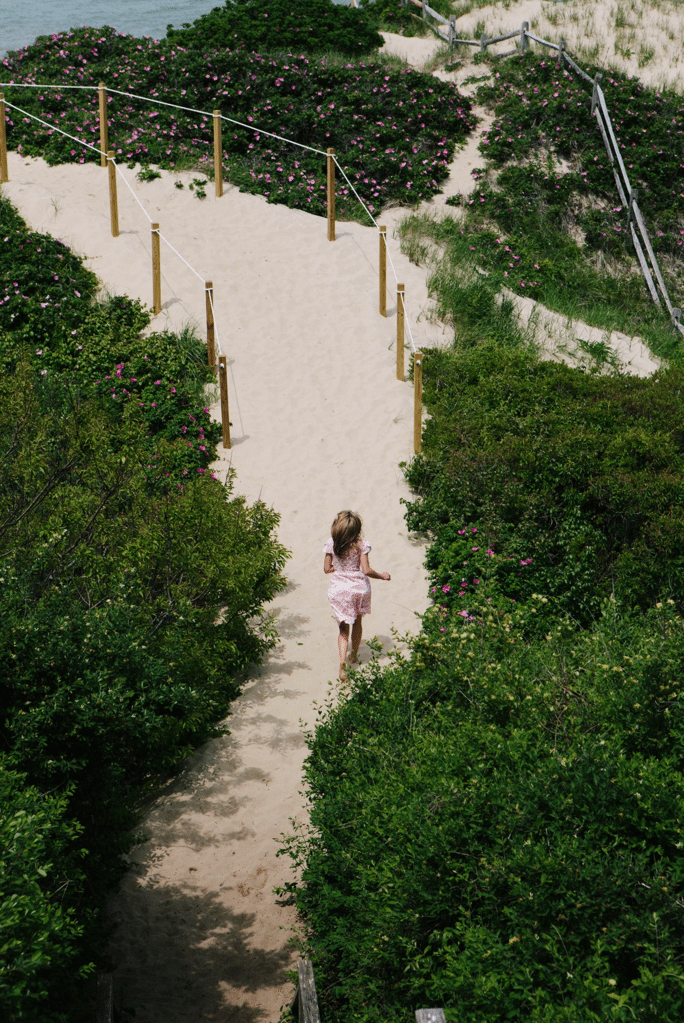 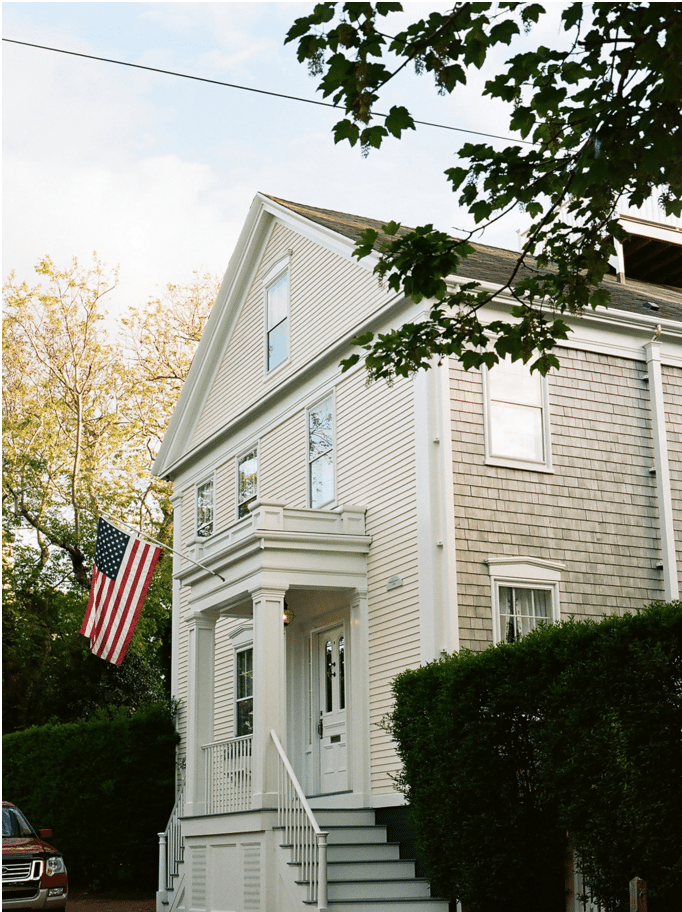 The Griffith’s Nantucket home was originally built for Captain William M. Barrett in the 1800s.

Jessica hand paints the whimsical designs on each board herself, typically while sitting on the porch, and then sets them out in the sun to dry. Custom boards created with a crest to commemorate a couple’s wedding are her most common orders, and all of the boards are finished with an “accident resistant” spray, so they can stand the test of time. Like the eclectic pieces, heirlooms, and antiques that adorn the beautiful beach home where these boards were created, they’re meant to be passed down for generations to come.

It is Jessica’s goal with Nine Fair to create a brand that combines her mother’s style and her family’s sense of fun and camaraderie into a product she hopes will bring others together as well. To learn more please visit Nine Fair and follow @nine_fair via Instagram.  Additional images are available via Vogue.

« August Musings: From Princess Diana to the Return of Chintz
Blue and White on Sale for Labor Day »