On Thursday, I wrote about a charming 640-square-foot Palm Beach maisonette, decorated by the gracious and oh-so-talented Mimi McMakin, founder of Kemble Interiors. After my post, Ms. McMakin sent me such a sweet note of thanks which made my day, and she informed me of an interview she had conducted for the Summer 2013 issue of flower magazine! The feature also includes a glimpse of the Palm Beach maisonette owner’s other Palm Beach home… more on that in one moment!

But first, let’s start with Mimi McMakin. A fourth-generation Palm Beacher, McMakin inherited her love for interior decorating through her mother who had a passion for arranging flowers and furniture. In turn, she passed down her creativity to both of her daughters. Renowned interior decorator Celerie Kemble heads up Kemble Interiors’ New York office, and Phoebe Kemble is a Le Cordon Bleu chef who has opened the newest branch of Kemble Interiors in London.

When McMakin first married and was living in New York, she worked for a company where her primary job was to return materials that had been borrowed from a design center. This piqued her interest, and when she and her husband eventually moved back to Palm Beach, she worked for two well-known decorating firms—Smith Knudson and then Polly Jessup, who was the grande dame Palm Beach decorator, and a contemporary of Sister Parish. She opened Kemble Interiors in the mid-1980s, and the rest is history. 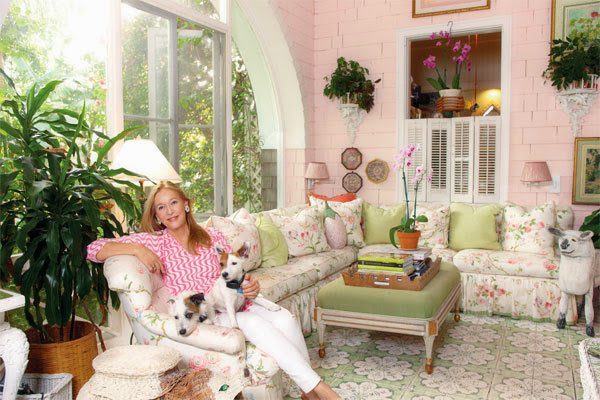 Mimi McMakin relaxes on the pink porch of her Palm Beach home with her beloved dogs Turtle And Anchovie. The home, a former Episcopal church – the first Bethesda-by-the-Sea, was featured here in the August 2011 issue of Town & Country. The room exemplifies the designer’s love of a pretty palette, layered and sometimes quirky collections, and furniture that will accommodate real life. Photo by Robert Nelson, via flower magazine. 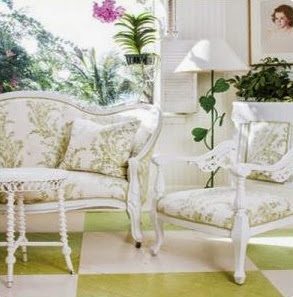 A sitting area in McMakin’s master bedroom is a study in green and white, reflecting the verdant landscape beyond. Vines appear to have climbed through the window to envelop the upholstery fabric and the base of a floor lamp. The portrait is of her daughter, Phoebe. Photo by Zach Desart, via flower magazine. 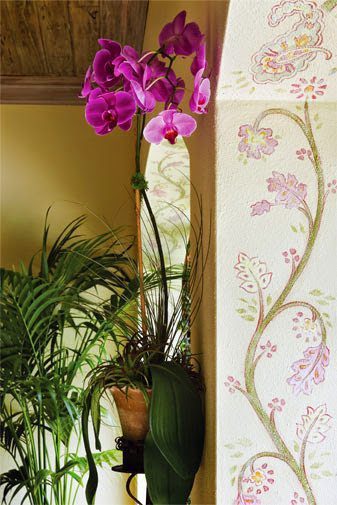 No detail in a room escapes McMakin’s attention. She often incorporates murals and decorative painting into her design, as seen in the floral vine climbing this archway, painted by Raoul de Sibour. Photo by Brantley Photography, courtesy of Kemble Interiors, via flower magazine.

Now let’s head back to Palm Beach’s Major Alley! The owners of the maisonette I featured on Thursday also own a second residence just across the alley path that they use as their pied-à-terre. Here is a picture of the “colorful cantaloupe living room,” as McMakin described it. 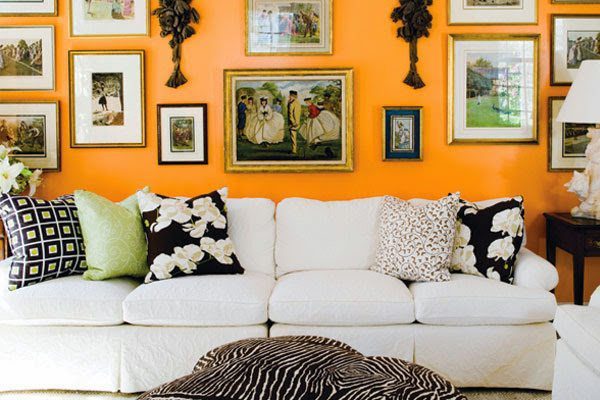 Lacquered cantaloupe walls both anchor and provide a little levity for a room that includes a collection of fine art and antiques, including a wood carving in the style of 17th-century artist Grinling Gibbons. The orchid pillow fabric is by Raoul Textiles.Photo by Zach Desart, via flower magazine.
This image whet my appetite, and I had to see more.. After some digging, I discovered the pied-à-terre was featured in the 2009 May/June issue of Southern Accents. Here are a few more images! 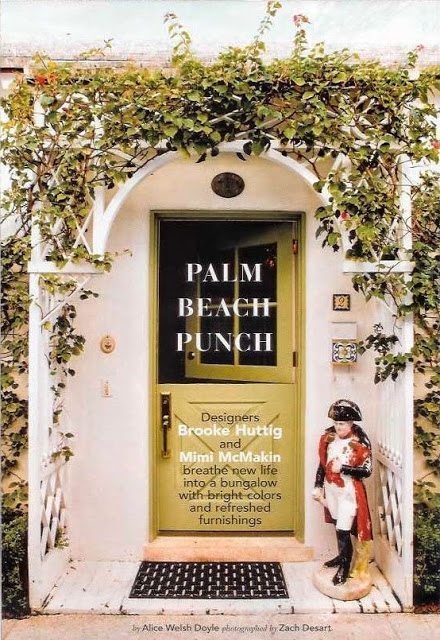 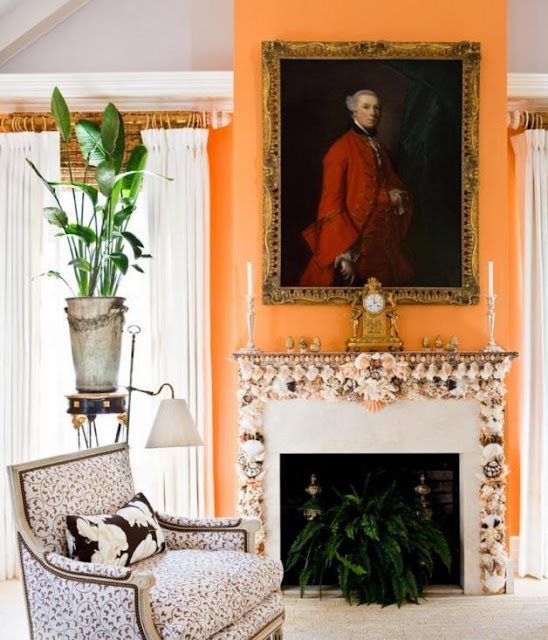 The portrait above the mantle is by Sir Joshua Reynolds, and the shell-encrusted mantle imparts a bit of Florida flair. 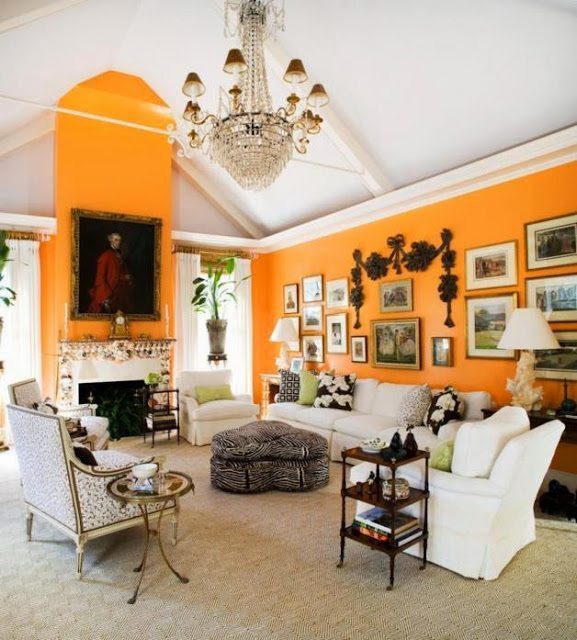 The owners brought the paining that now hangs over the mantle from their home in London. While a bit “serious” for Palm Beach,decorators McMakin and Brooke Hutting added some lightheartedness with the brightly colored walls, plush matelassé covered sofa, and club chairs. They lightened the bergères, originally in a green finish, with new linen upholstery in antique white.
Image via Kemble Interiors. 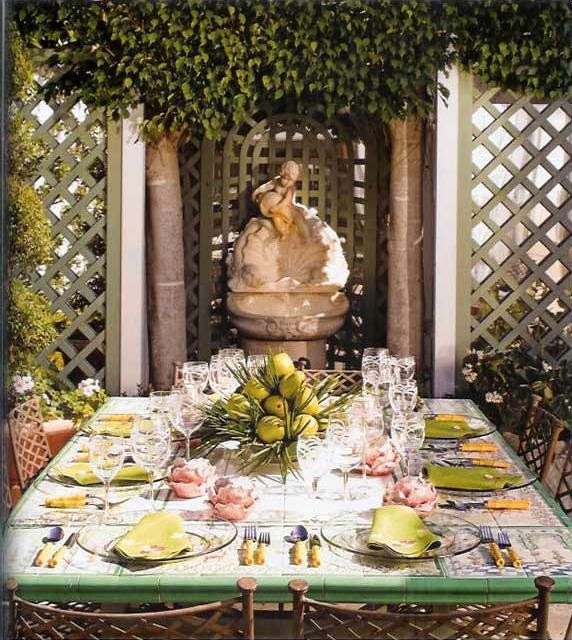 Anothernwonderful feature of the home is an enclosed terrace that makes an ideal spot for dining. The mosaic tiled table is custom-painted with scenes from Château de Malmaison in France, the former home of Empress Joséphine. 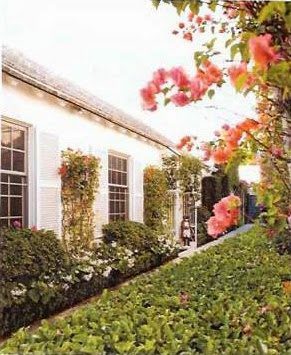