“Last night I dreamt I went to Manderley again…” It is one the greatest opening lines in English literature, written by Daphne du Maurier for Rebecca, her 1938 best-selling novel that has enthralled readers for decades.  Over the years, Rebecca has had many media adaptations, the most famous being the Academy-Award Winning Hitchcock movie released in 1940 staring Laurence Olivier and Joan Fontaine.  The most recent adaptation, released last month by Netflix, stars Armie Hammer and Lily James, and I found it to be hauntingly beautiful.

I first read Rebecca in high school English, and I have been mesmerized with the story ever since. The unnamed narrator begins as an orphaned young lady working as a paid companion to a vulgar American woman – Mrs. Van Hopper – on holiday in Monte Carlo.  She falls in love with Maxim de Winter, a recently widowed aristocratic Englishman, who quickly proposes and sweeps her away like a Cinderella fairytale to Manderley, his estate in Cornwall that has been in his family for centuries. But when she arrives, she discovers she is living with the ghost of Rebecca, Maxim’s deceased wife who was a famous beauty, and on the surface a devoted wife and perfect hostess. Manderley’s sinister head housekeeper, Mrs. Danvers – played brilliantly by Kristen Scott Thomas in the Netflix adaptation – tries to undermine the new Mrs. de Winter and convince her Maxim will never find happiness with her. However, dark secrets are soon revealed in this spine-tingling Gothic mystery. 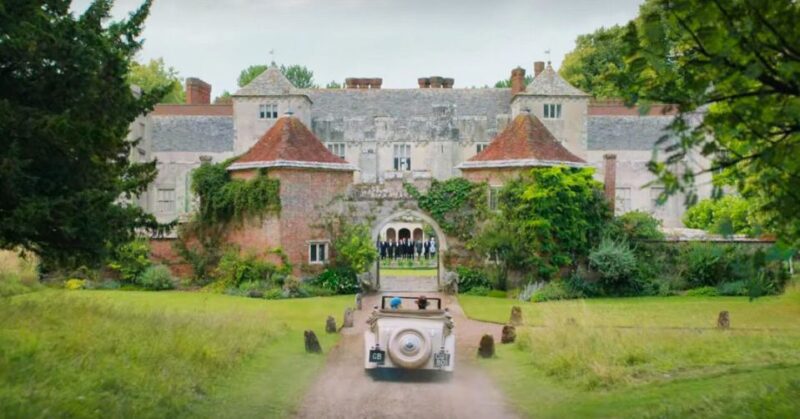 As much as I love the classic Hitchcock adaptation, seeing Monte Carlo and Manderley in full color with modern cinematic effect is a visual feast for the eyes. Eight different English estates were used for filming, with Hatfield House and Cranborne Manor serving as the main interior and exterior of Manderley.  Loseley House, Petworth House, Osterley House, Hartland Quay, and Mapperton House were also used for the interiors. Waddesdon Manor was used for the scenes inside Mrs. Van Hopper’s Monte Carlo hotel suite. (Read more about the homes here.)

“Manderley is such a massive character,” production designer Sarah Greenwood, told the Hollywood Reporter, that she realized she “could not find everything in one house.” I particularly enjoyed seeing Rebecca’s chillingly beautiful bedroom which “hints at Hollywood glamour as she would have been very glamorous and sophisticated if we had ever seen her,” said Greenwood. “Our approach was, Rebecca would have gotten these decorators from London such as Elsie de Wolfe and Syrie Maugham, so we used them as references. This was her deliberately breaking the rules of the house.” Greenwood chose a de Gournay Chinoiserie scenic wallpaper for the icy blue bedroom that serves as a sort of mausoleum for the late Rebecca.

Let’s take a sneak peek with images by Kerry Brown and screen shots I took from Netflix…. 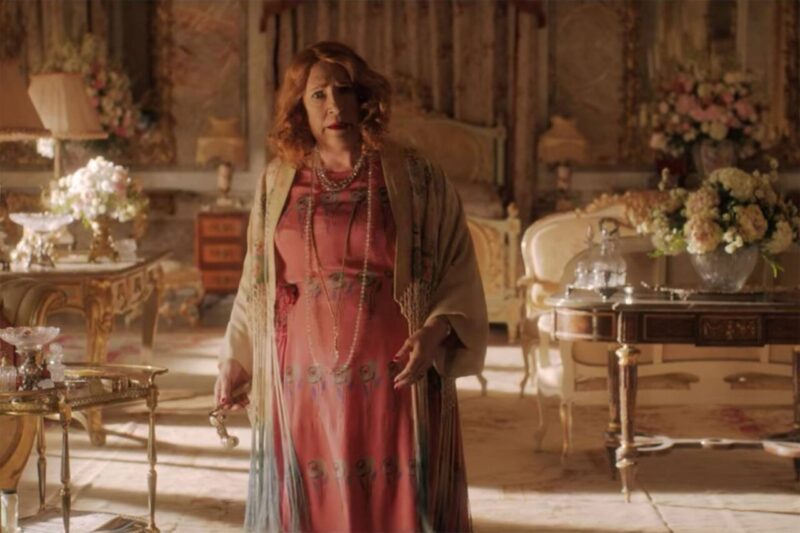 Ann Dowd as Mrs. Van Hopper – Waddesdon was chosen as the setting for her hotel room because of its “very French influence” and for being so “florid and overblown in style” said production designer Sarah Greenwood. 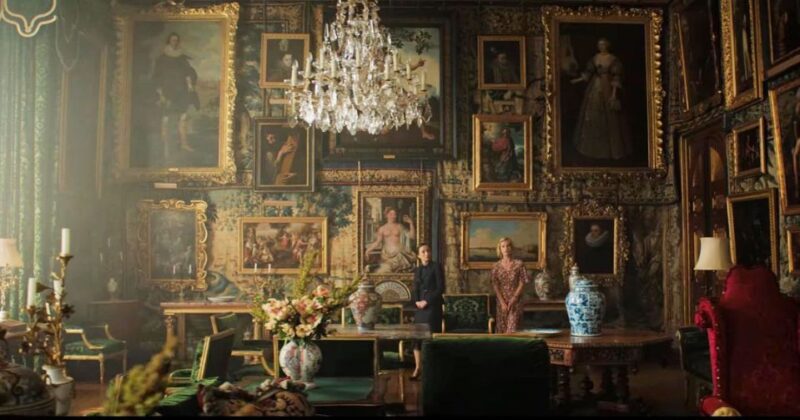 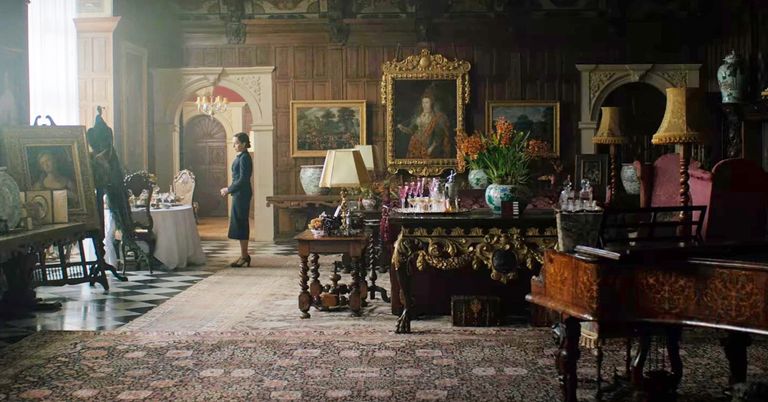 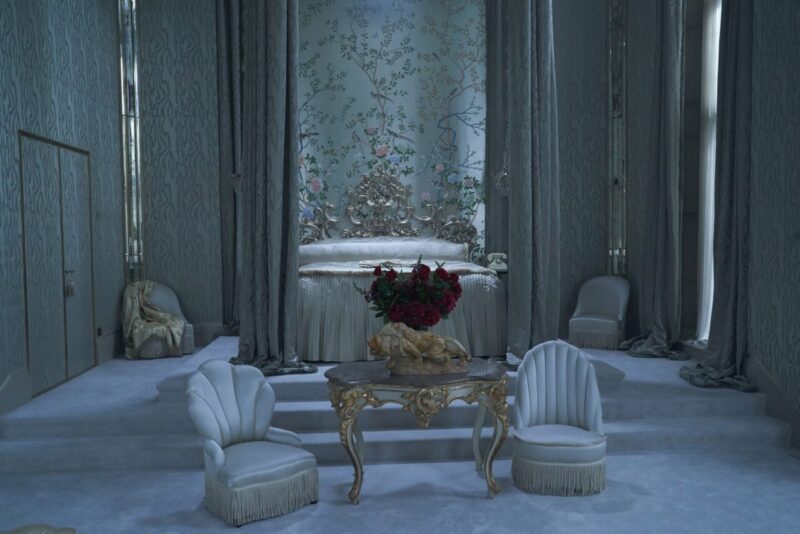 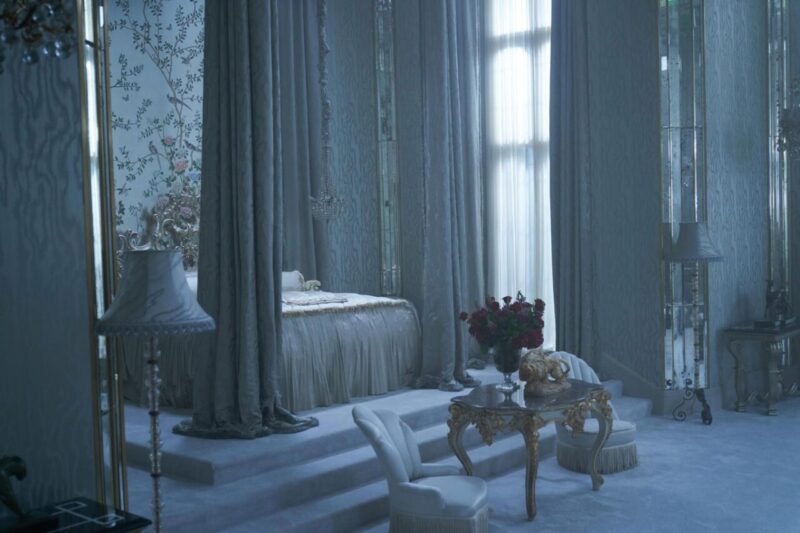 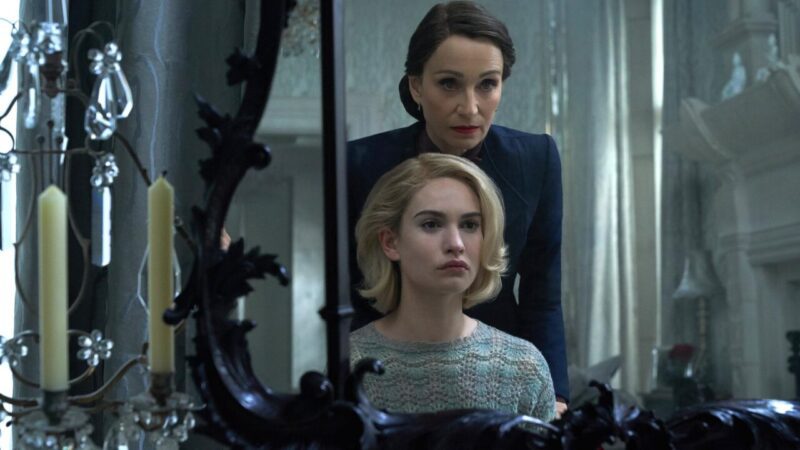 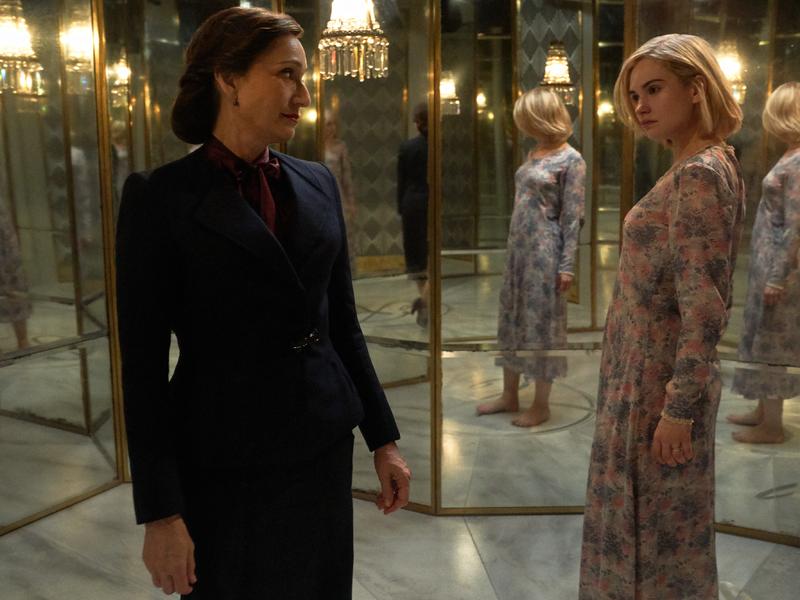 The Netflix Rebecca is rich with symbolism – Rebecca’s long dark hair featured throughout foreshadows her demise and is a foil to the new Mrs. de Winter’s short blonde bob. Rebecca’s icy blue bedroom reflects her cold heartedness, and the watery blue silk moire upholstered walls are reminiscent of the sea in which she drowned. The hall of mirrors leading to her bedroom was inspired by the fun house in Orson Welles’ “The Lady From Shanghai” and represents the hypnotizing effect Rebecca has on the protagonist. Rebecca’s signature “R” monogram emblazoned throughout the house reveals the possession she took over Maxim’s home, even after death. And her boat, aptly named “Je Reviens” means “I will be back” in French. 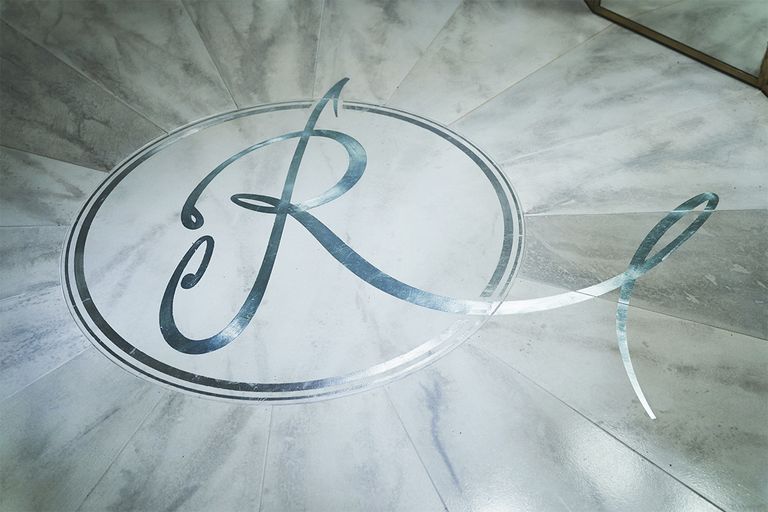 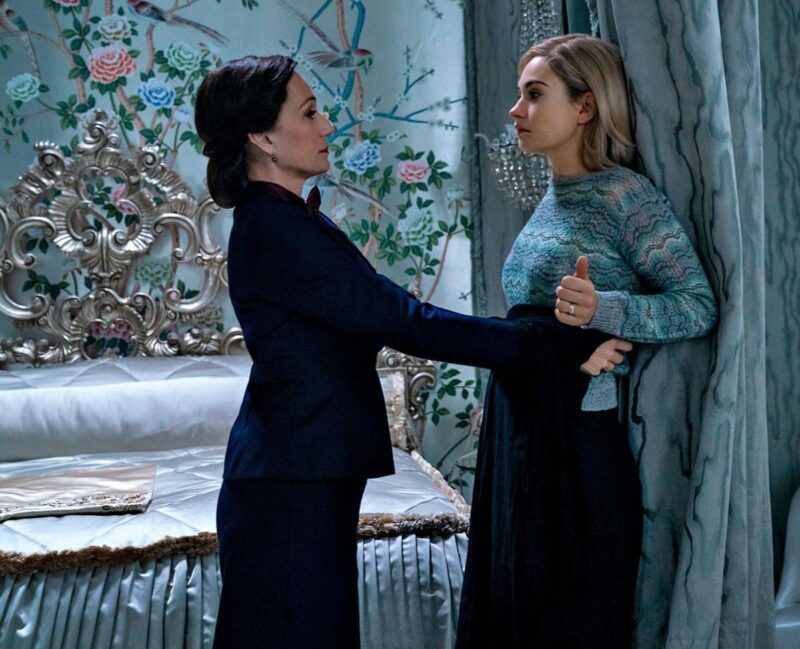 The newlywed de Winters’ bedroom in the East wing of Manderley  is much smaller and does not overlook the sea, like Rebecca’s

It is covered with a symbolically suffocating creeping ivy pattern on the bed and curtains. 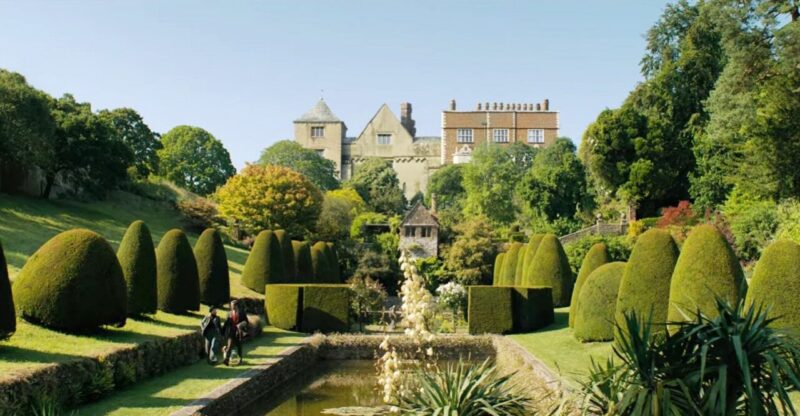 The setting Daphne du Maurier envisioned in the 1930s when creating Manderley was based on Menabilly, a home she leased on the south coast of Cornwall. The interiors were inspired by Milton Hall which du Maurier visited in her youth. Dating back to the 16th century, today Milton is the family residence of Sir Philip and Lady Isabella Naylor-Leyland (in laws to Alice Naylor-Leyland) and it was prominently featured in The English Country House, published by Vendome in 2013. Please click here for a tour.

To learn more about the Netflix filming locations, please click here for an interview with production designer Sarah Greenwood.

Have you seen the new Rebecca, and what did you think?