When Mayling and William McCormick purchased their Federal-style New Canaan, Connecticut home, they were attracted to its perfect symmetry. The home’s original owners fell in love with Homewood House, a National Historic Landmark at Johns Hopkins University, and built a near replica in 1989. It featured meticulously pruned trees lining the gravel driveway, classic portico, Palladian windows… and a kitchen and bathrooms that hadn’t been touched since the 80s. The McCormick’s turned to architect Louise Brooks (whose spectacular home I featured last week) for modern updates. Maureen, an advertising executive with a true passion for design, oversaw the interiors. Photography by Anastassios Mentis with captions by Mindy Pantiel for Connecticut Cottages & Gardens. 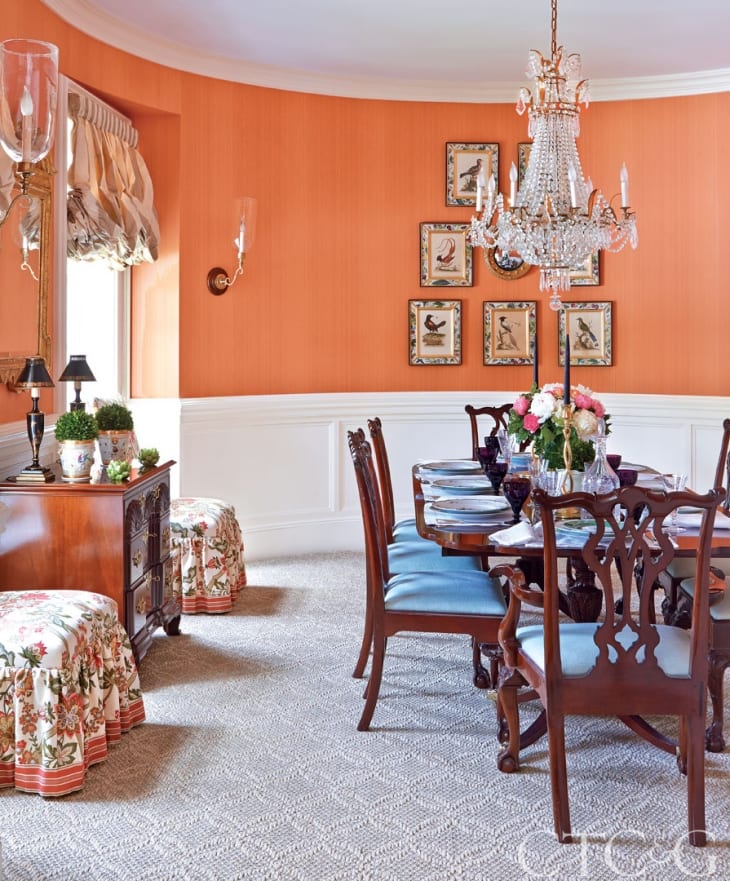 Bright Farrow & Ball wallpaper turns the oval dining room from traditional to transitional. The vintage Kindel chairs wear linen from Colefax and Fowler, and the side chairs are covered in Cowtan & Tout linen. The chandelier is from Agostino Antiques, and the carpet is from Stark. 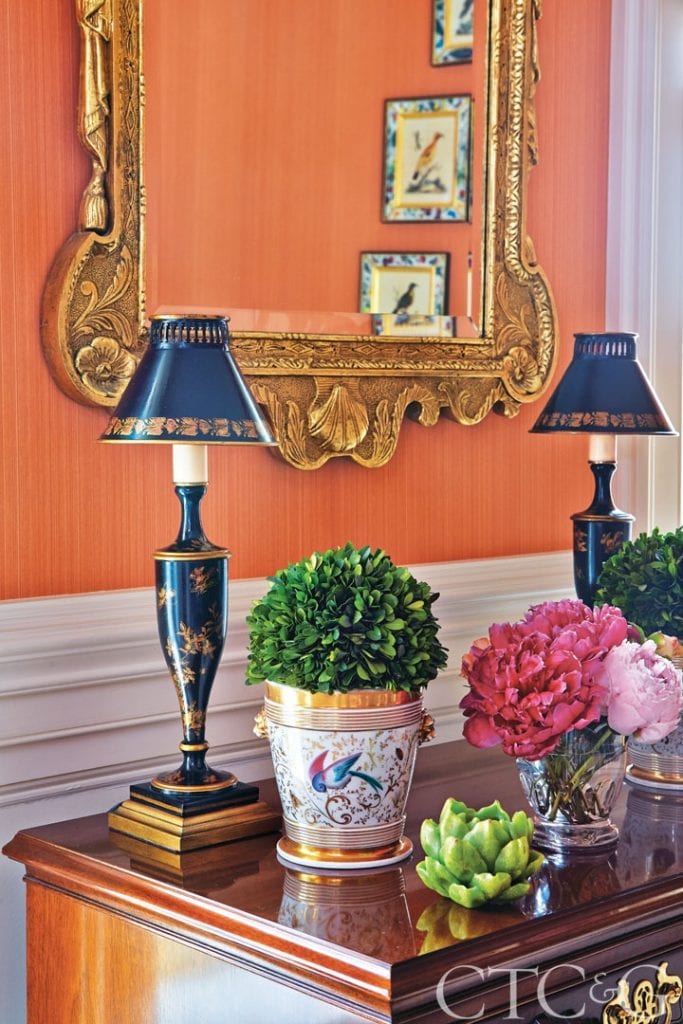 Bright details in the dining room. 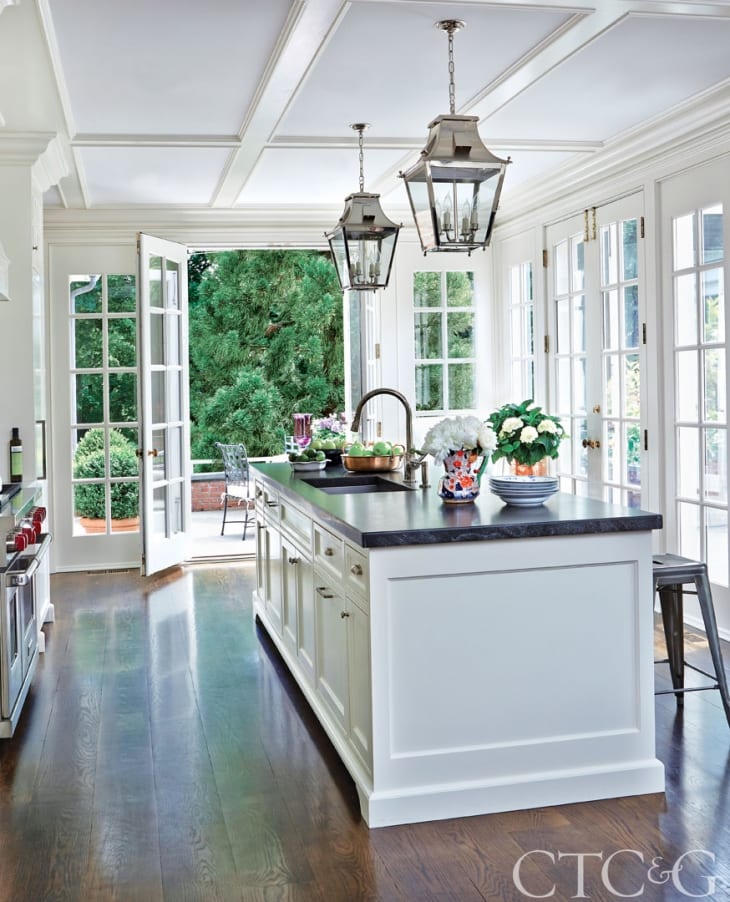 Designed by Louise Brooks, the totally renovated kitchen features new windows and doors that fill the space with natural light. Nickel lanterns from Vaughan are suspended above a granite-topped island. Nickel faucet is by Michael Smith for Kallista. 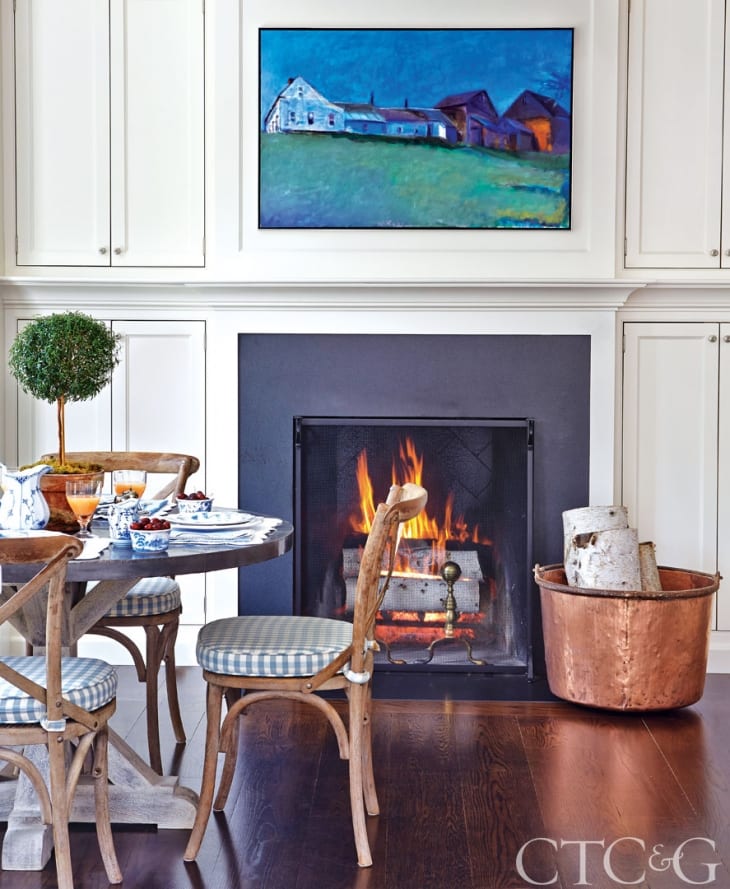 In the kitchen dining nook, McCormick, paired a contemporary painting by Wolf Kahn with a rustic looking table and chairs from RH. The seat fabric is by Elizabeth Eakins. The fireplace surround is black slate. 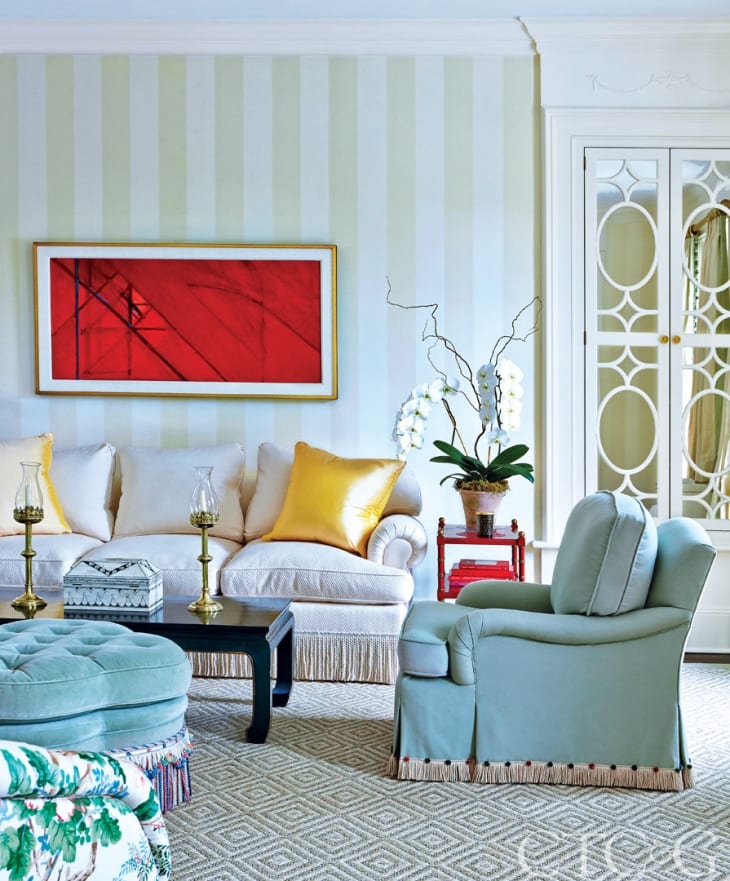 In the living room, an Edward Ferrell sofa in a Pierre Frey cotton, yellow silk pillows, an English armchair swathed in a green Manuel Canovas fabric, and a red painting, purchased more than 25 years ago from the SFMOMA, combine to make a colorful splash. 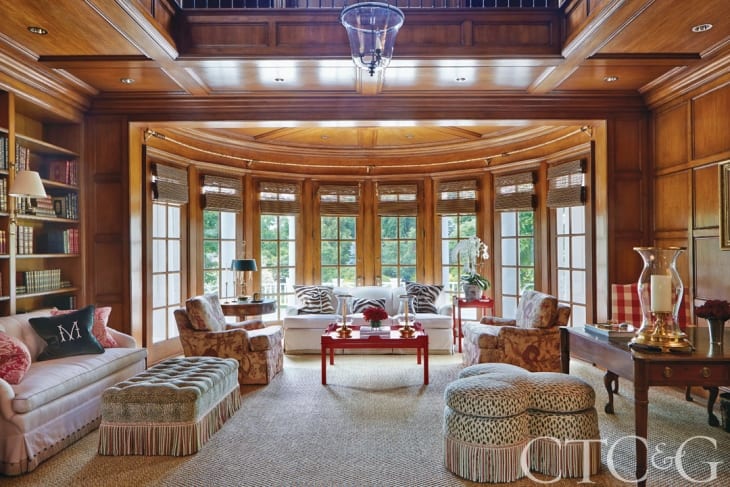 In the library, English armchairs are clothed in Bennison fabric; the coffee table is fromOomph; the antique partner’s desk is Baker; and the Brunschwig & Fils leopard ottoman features Clarence House trim. 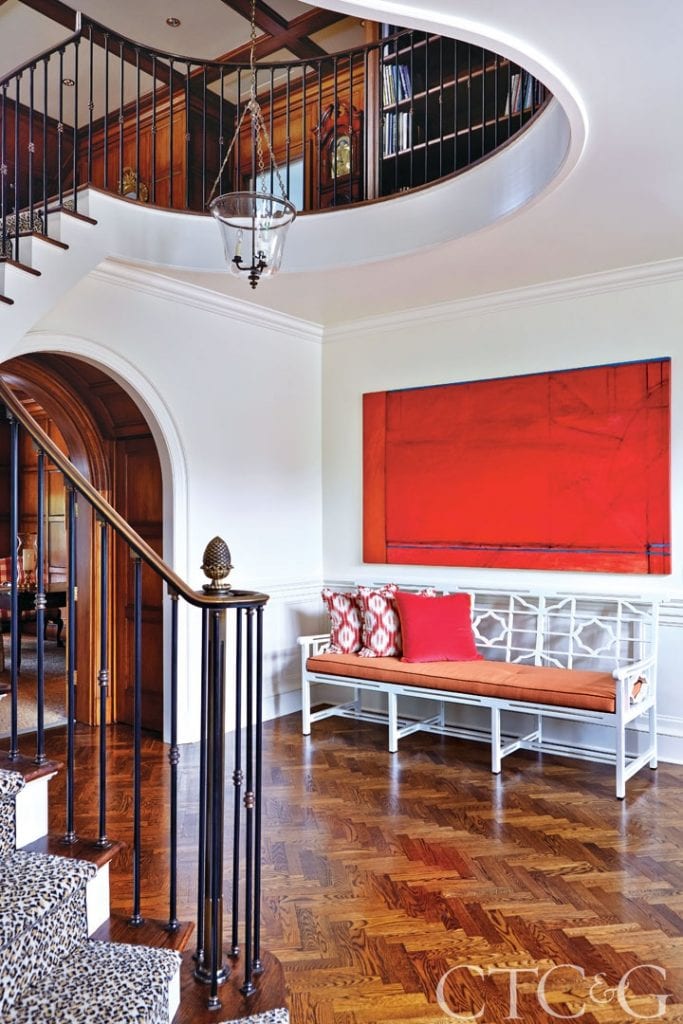 The white lacquer garden bench in the entry is from Janus et Cie; and the red and white pillows wear Pierre Frey linen. 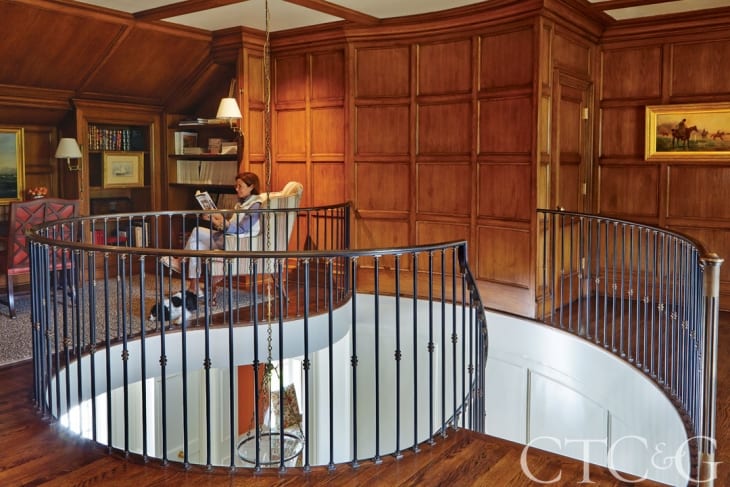 On the upper level of the library, the homeowner reads in an antique wing chair covered in Colefax and Fowler striped linen. The walls and shelves are crafted from butternut wood. 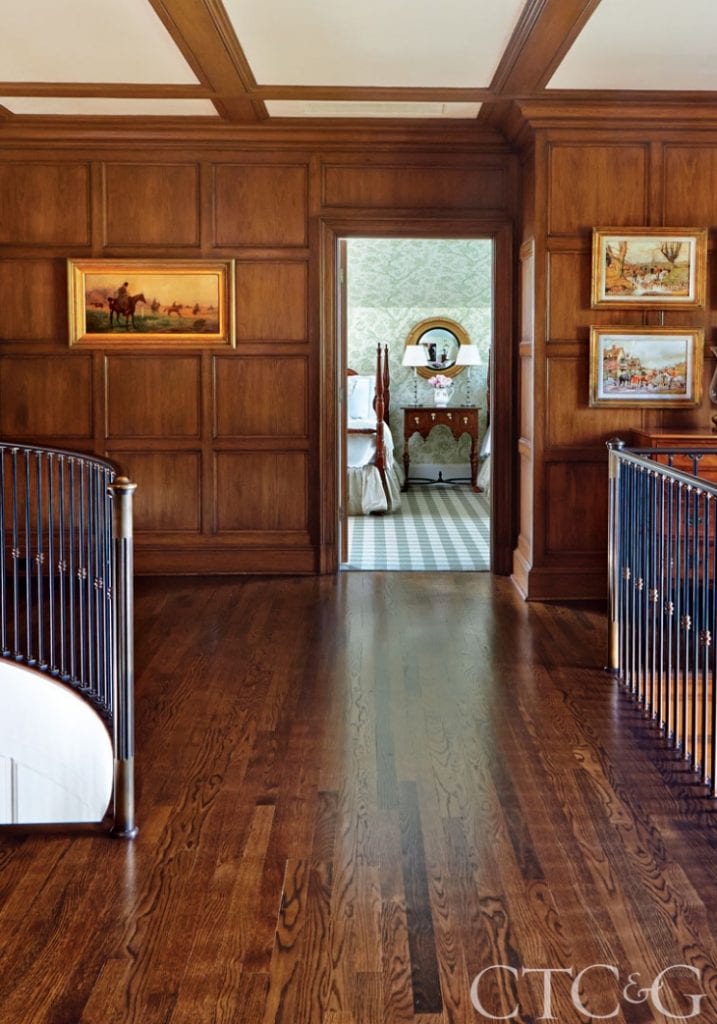 The main stair leads to the upper level of the library. 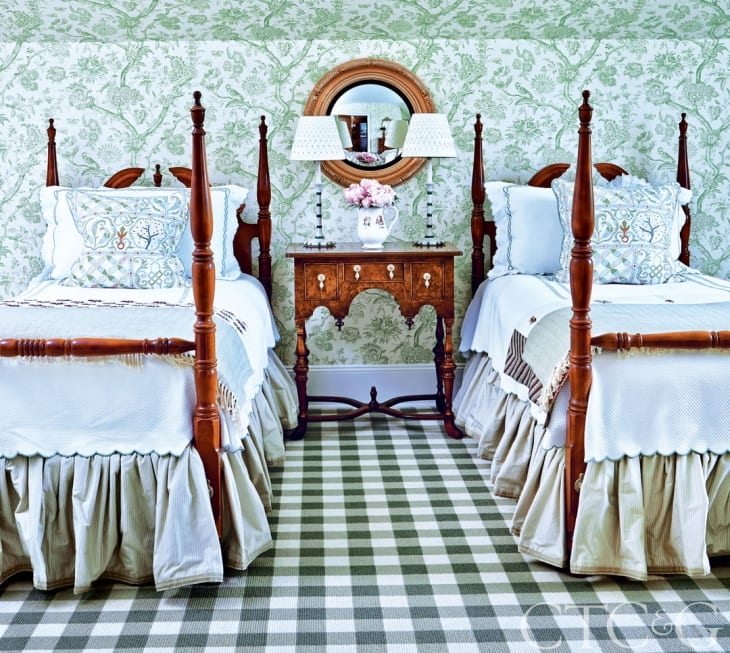 A pair of antique cherry four-poster beds in the guest room are topped with Elizabeth Eakins pillows and throws and Pratesi linens. The candlestick lamps are from Vaughan, and the wallpaper is Stroheim & Romann. 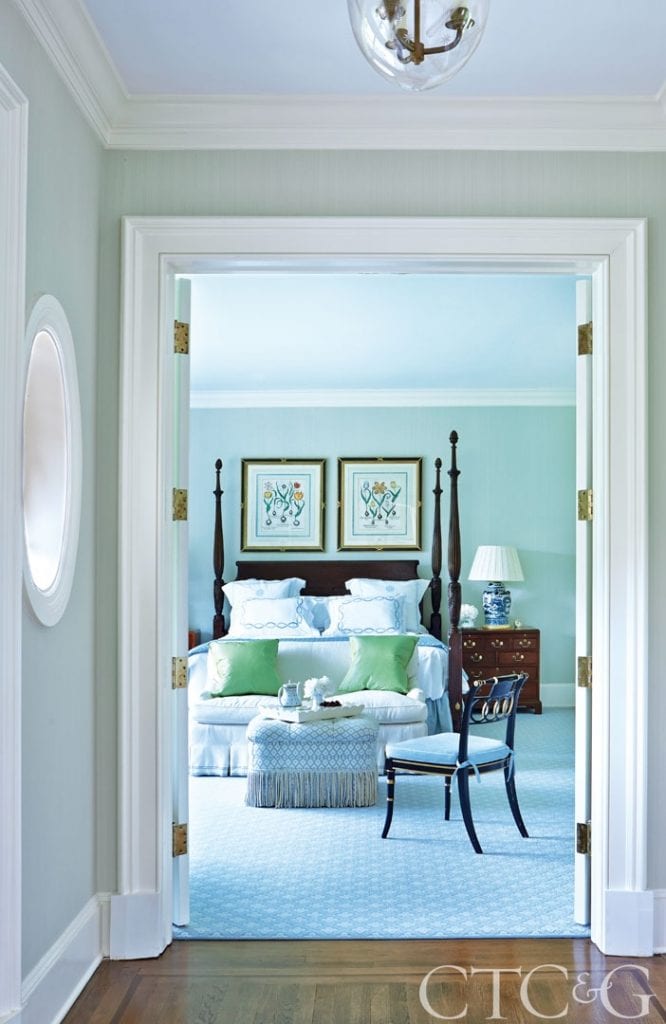 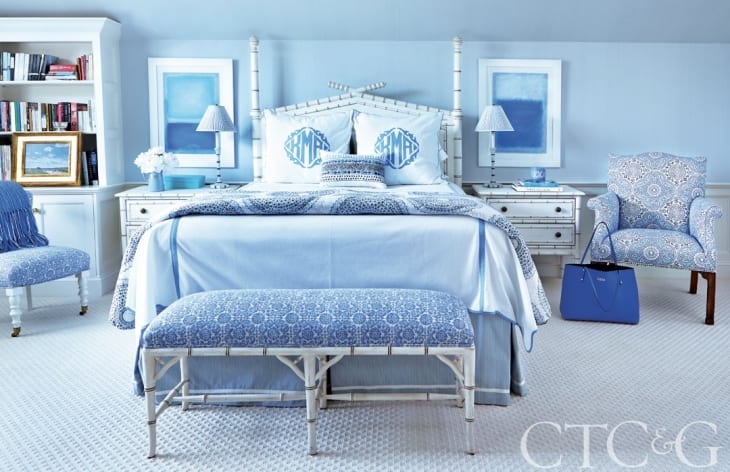 In McCormick’s daughter’s room, the bed, night tables and bench are all from Lewis Mittman; bed linens are from Leontine Linens and John Robshaw. The antique armchair from John Rosselli is covered with John Robshaw linen. 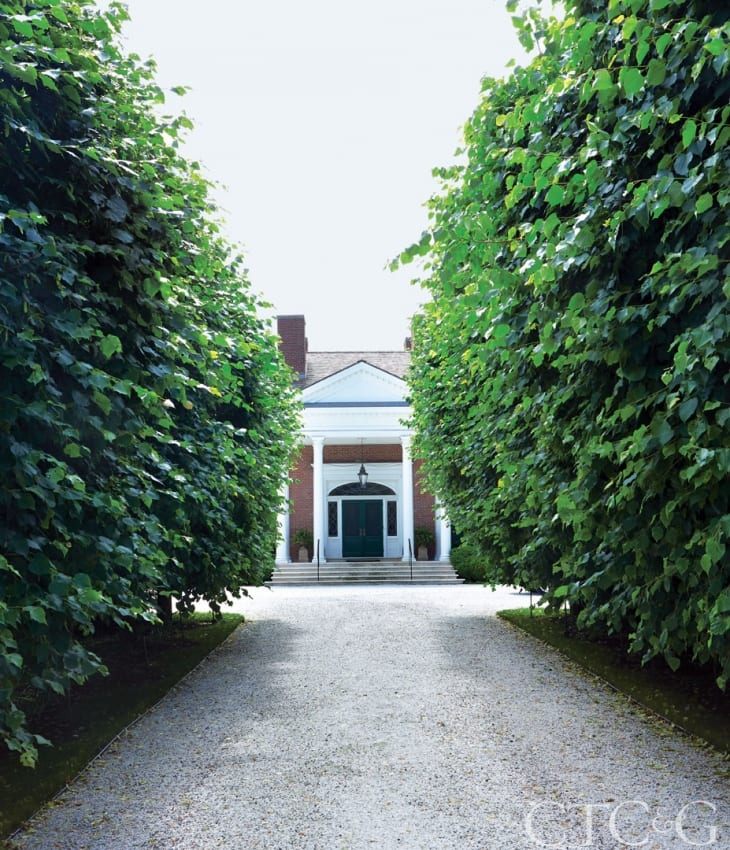 The tree-lined driveway establishes a sense of order that continues with the Federalist-style home’s architecture. 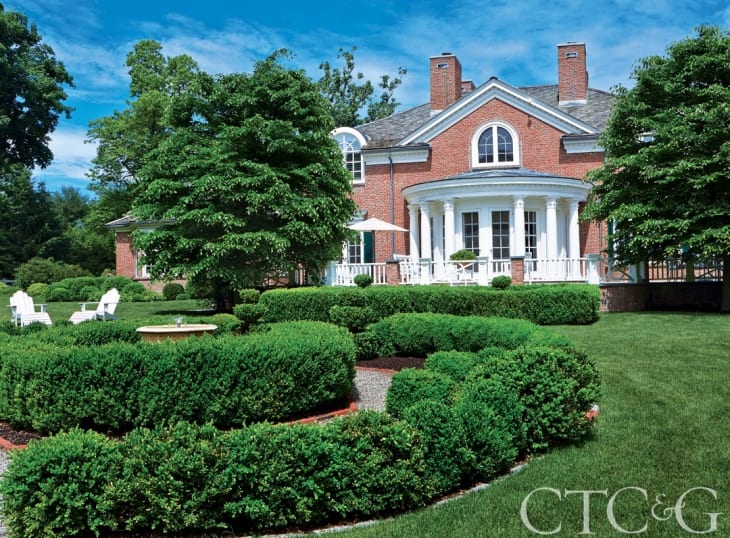 An avid gardener, homeowner Mayling McCormick continued the work of the previous owner who established the yard with a wide variety of flowering trees. The home’s rear elevation received a facelift at the hands of architect Louise Brooks. 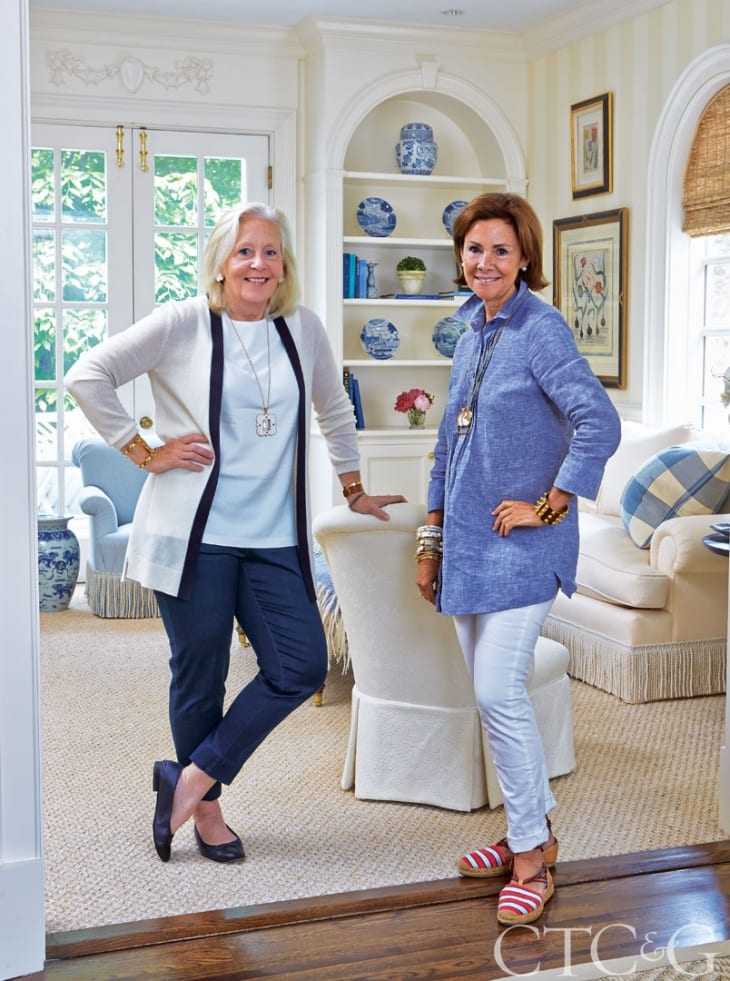