Sister Parish was one of the most influential designers in American history, and I was thrilled to see the home of Susan Crater, Sister’s granddaughter, featured in the April issue of Architectural Digest. Located in Bedford, New York, Susan and her husband embellished what was a bland 1960s shell with pilasters, cornices, mantels, and other classical details. Rooms and porches were reconfigured to accommodate their family and Susan’s mother, Apple Parish Bartlett, who visits the home as a winter stopover.

When it came to the decor Susan, a former lawyer and cofounder of Sister Parish Design, was daunted. “We had all these collections—Sister’s, Mom’s, mine—as well as my company’s fabrics,” she explained. “And the idea of drawing a thread through the house to unify it and make it cozy was just too much for me.” Throughout the more-than-year-long renovation, Apple and Susan collaborated with Eliza Crater, Susan’s daughter who works for designer Markham Roberts in New York City. “Pop Pop’s [Sister’s] aesthetic is very much mine,” Eliza said, “and how she would want my parents’ house to look is always in the back of my mind. But the front of my mind knows that she would want this house to be comfortable for the people living in it now…” 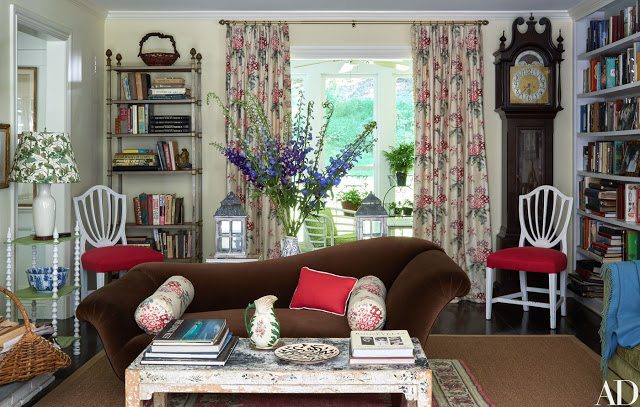 The living room features several pieces inherited from Sister including the étagère, bolsters, and curtains. 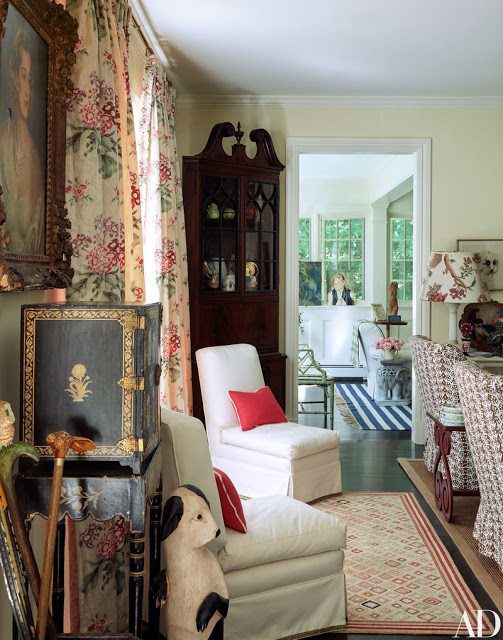 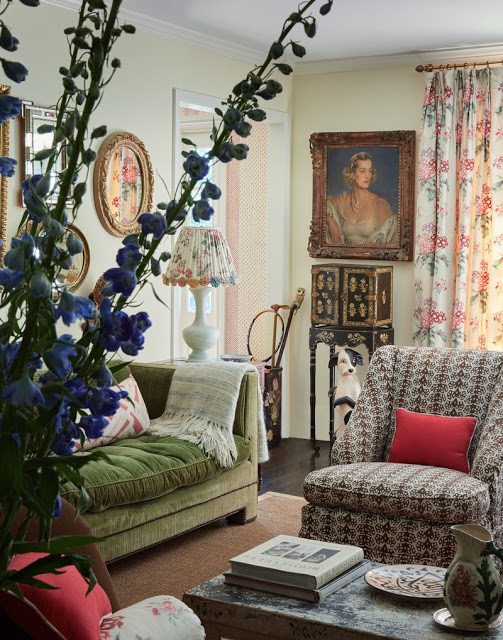 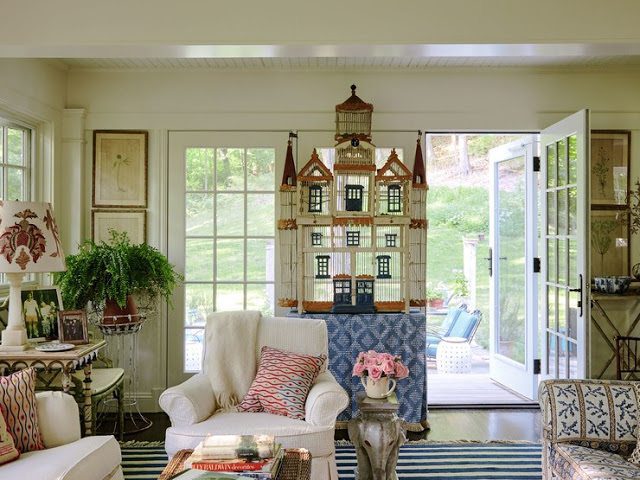 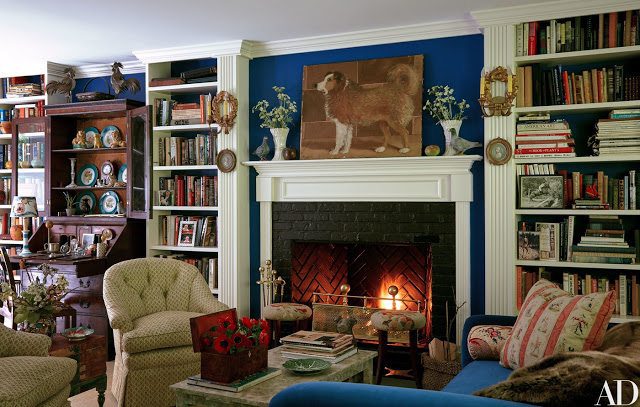 The library’s cobalt-blue was inspired by walls in Apple’s former Boston home. The 19th-century dog portrait above the mantel, along with the sconces and Wedgwood medallions, once belonged to Sister. 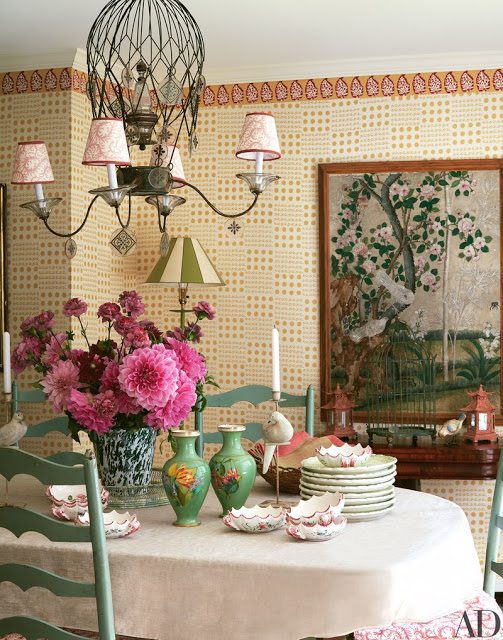 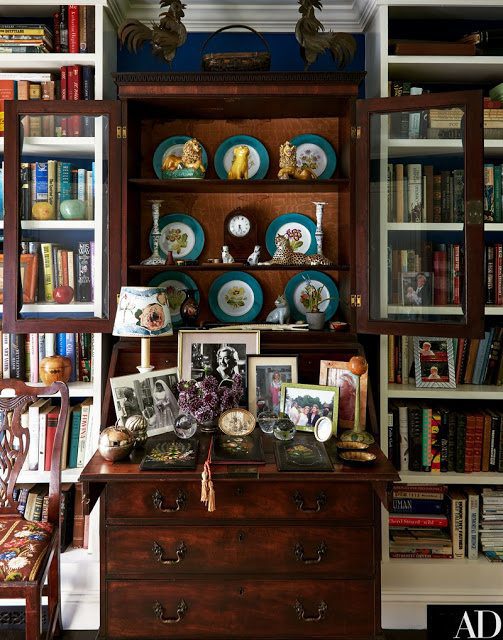 A Georgian mahogany secretary handed down from Sister Parish displays family photos and other mementos. 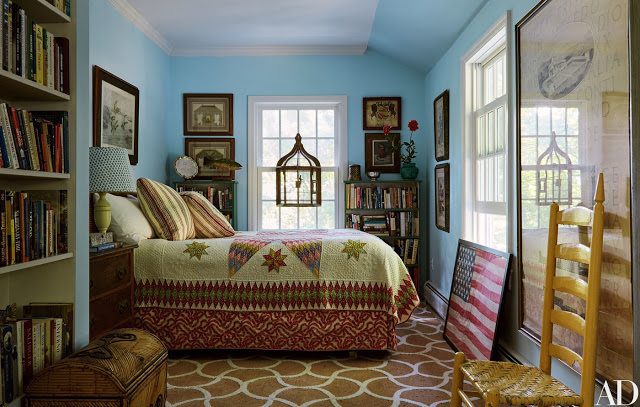 The lampshade and pillows in a bedroom are made from fabrics by Sister Parish Design; the quilt came from Sister’s house in Maine.

The shadow box on the windowsill is by Apple, and the hooked rug came from Sister. 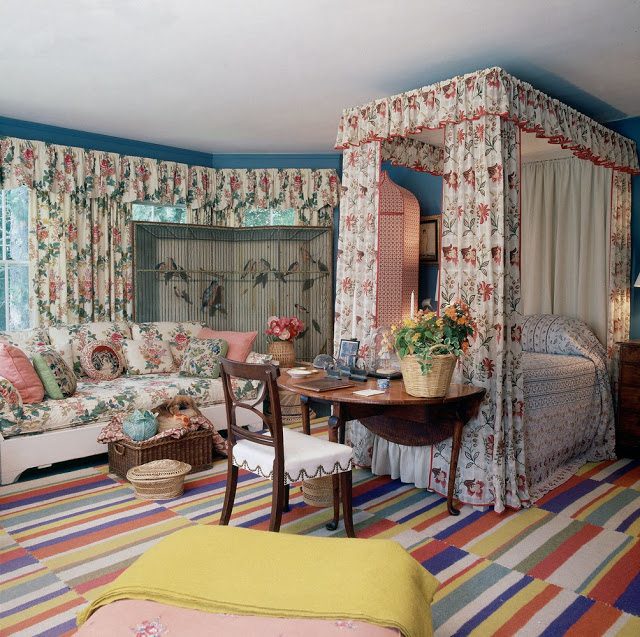 A bedroom at Sister‘s Maine home, House & Garden, 1977.
A pioneer in mixing periods and styles, high and low, Sister once wrote, “In good decorating, innovation is often the ability to reach into the past and bring back what is good, what is useful, and what is lasting.” 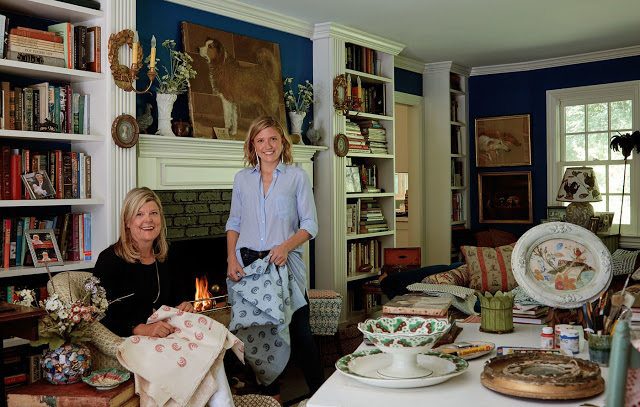 Susan and her daughter Eliza.

For more, please see the April 2017 issue of Architectural Digest with text by Douglas Brenner and photography by Oberto Gili. And for additional information on the life of Sister Parish, you will enjoy Sister Parish: The Life of the Legendary American Interior Designer, written by Apple Parish Bartlett and Susan Bartlett Crater. I also recommend Sister Parish: American Style and Parish-Hadley Tree of Life.