I’ve been California Dreaming of The Beverly Hills Hotel lately, as the iconic pink and green color scheme and banana leaf motif is serving as the inspiration for our dining room renovation. So I could not have been more thrilled when I learned that today was the official launch of the newly refreshed poolside Cabana Café!

I have been desperately searching for pictures of the newly renovated Cabanas, which were officially opened to hotel guests late last month… Since professional images are not available from The Beverly Hills Hotel until later this summer, my heart skipped a beat when I stumbled across this exclusive sneak peek, via The Hollywood Reporter… 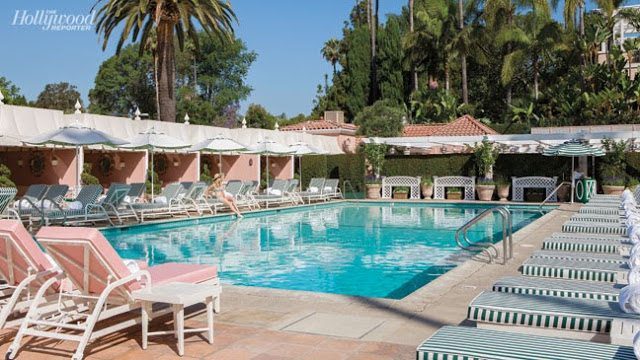 The pool has just resurfaced after a three-month, multimillion-dollar renovation befitting the Pink Palace, which turned 100 last year. “Everything was custom designed to preserve what the hotel represents: the glamour, the stripes, the pink, the green,” the designer Adam Tihany, who was responsible for the refresh, told The Hollywood Reporter. “I commissioned a banana-leaf mural, and we created a new umbrella that makes you feel like you’re under a banana tree.” 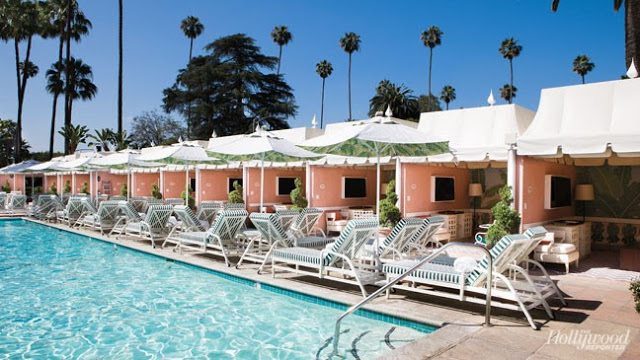 The new Beverly Hills Hotel pool and cabana area looks a lot like the classic one. “Every aspect of our restoration pays homage to our past,” Edward Mady, hotel general manager, said to The Hollywood Reporter. “We actually have more of the hotel’s iconic pink and green colors at the pool.” No changes were made to the pool itself. “That would be sacrilegious,” said Tihany. 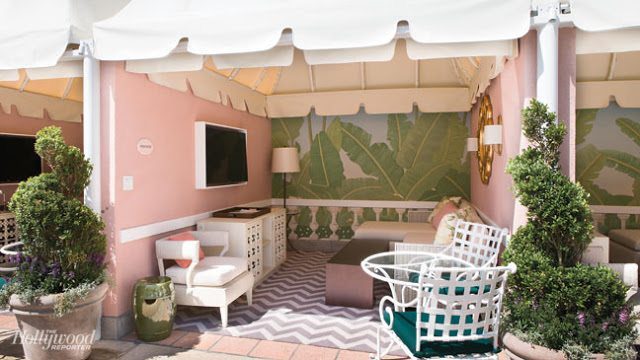 The updated cabanas — which are available to rent from $400 to $950 a day to hotel guests only — include such amenities as champagne, chocolate-covered strawberries and a massage for two. 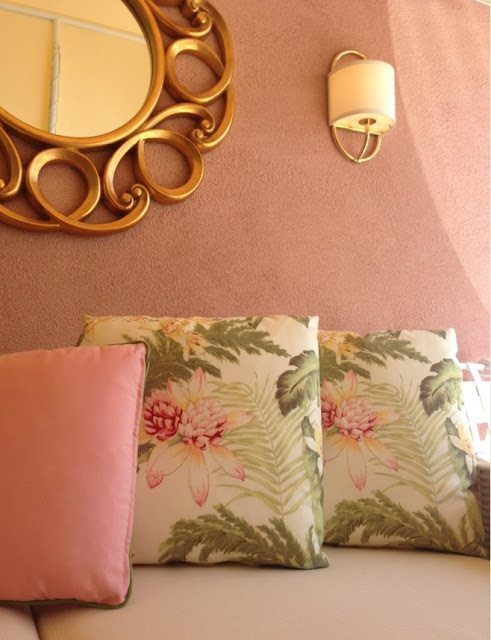 Here is a close-up inside one of the Cabanas, via The Beverly Hills Hotel’s Twitter page. 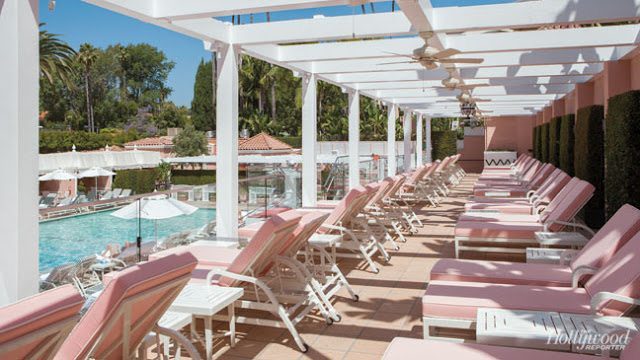 The cushions on some of the pool’s lounge chairs were changed from green-and-white stripes to full-on pink. A previous color scheme was yellow. 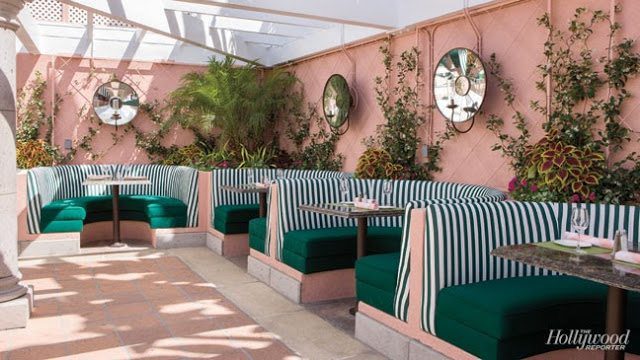 Booths at the Cabana Cafe, which opened today! 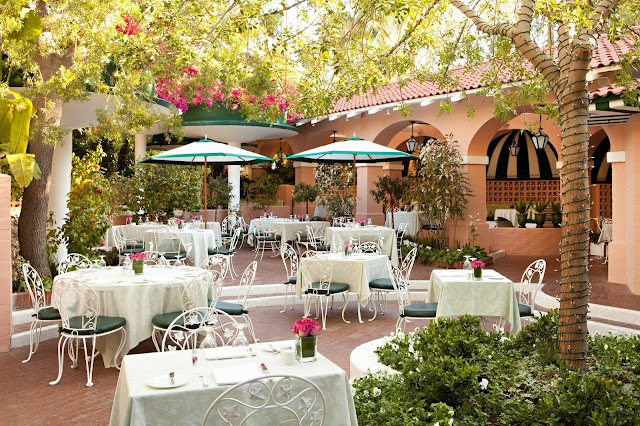 And check out the recently renovated Polo Lounge Patio, unveiled earlier this year, via The Beverly Hills Hotel. 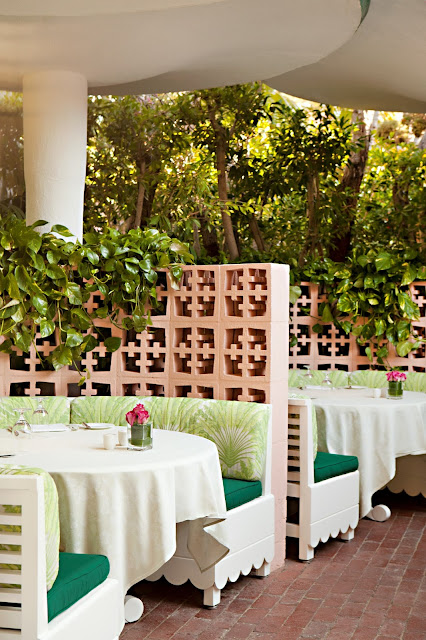 The renovations to The Beverly Hills Hotel began in 2012, the hotel’s Centennial year, with the unveiling of the new lobby, which features a beautiful banana leaf center medallion crafted of limestone. The renovations will continue through 2014, with restoration of the guest rooms.

I don’t know about you, but I’m ready to plan my Cabanacation!! Did you know The Beverly Hills Hotel is also pet friendly? I think my teacup Chihuahua, Phoebe, has been watching too much Beverly Hills Chihuahua… She want so go with. 🙂

Stay tuned for more on the 100 year star-studded history of The Beverly Hills, and the two-and-a-half-year renovation. But until then, here are some iconic Beverly Hills Hotel poolside snapshots, also courtesy of The Hollywood Reporter. 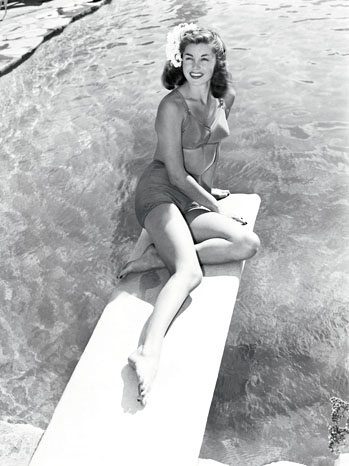 Swimming champ-turned-movie star Esther Williams (who died June 6) posed on the hotel diving board in 1939. Her contract with MGM gave her the right to swim there daily. 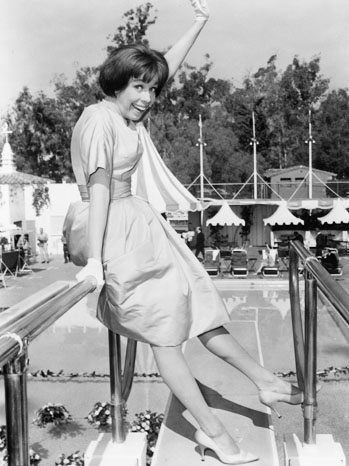 Carol Burnett hanging out by the iconic pool in 1963. 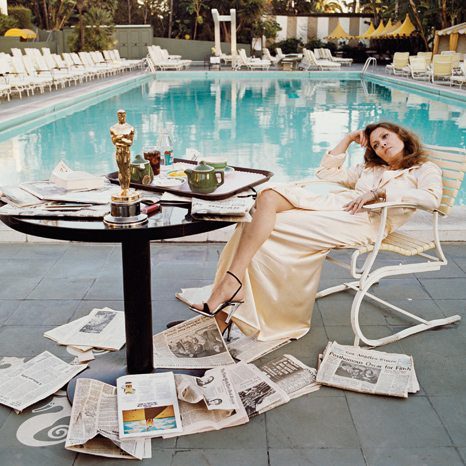 Faye Dunaway posed at the hotel’s pool after winning the 1976 best actress Oscar for Network. She later took lessons there in 1940s swimming styles to play Joan Crawford in Mommie Dearest. (Note the yellow color scheme.) 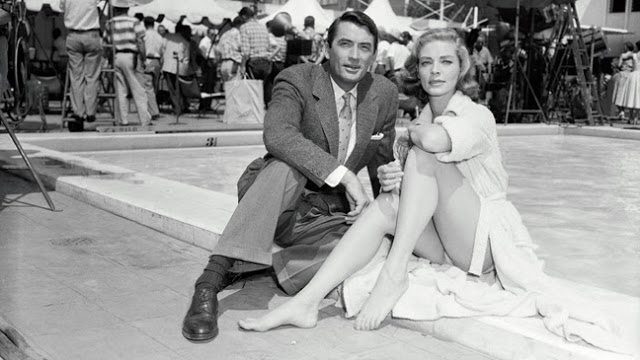 Co-stars Gregory Peck and Lauren Bacall on the set of Designing Woman on the first day of the romantic comedy’s Beverly Hills Hotel shoot in 1956. Their characters meet poolside. 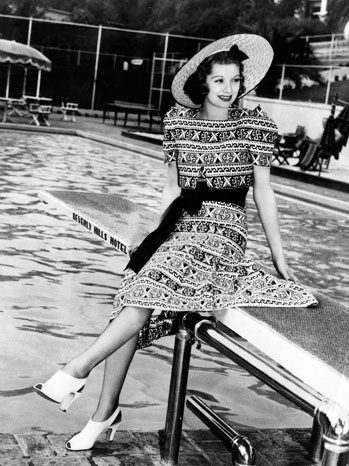 The iconic redhead, Lucille Ball, posed by the pool in 1938 — looking chic as ever. 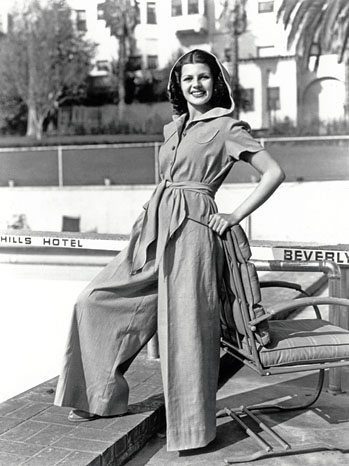 Rita Hayworth struck a pose by the pool in bold palazzo pants in the 1940s, around the time that Marlene Dietrich broke the hotel’s ban on women wearing trousers. 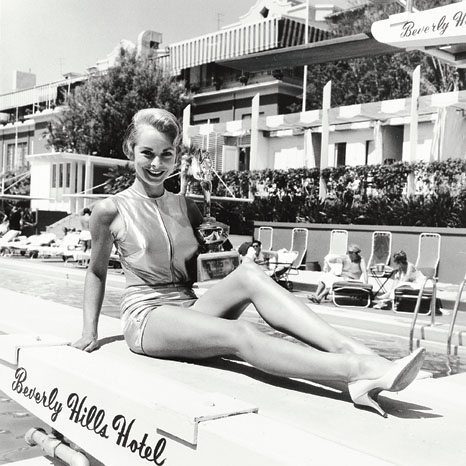 Janet Leigh poolside circa 1950. In past years, the pool had sand around it as well as a high dive, both since removed.