What was once the Astor family’s garden pavilion in the Hudson River Valley was transformed into an exquisite country retreat for fashion magnate Robert Duffy – founder and deputy chairman of Marc Jacobs International – and his family.

Thirty years ago, Duffy had a weekend home across the river.  An acquaintance showed him an uninhabited folly on the grounds of Ferncliff, the old Astor estate near Rhinebeck. The Astors would retreat – via miniature railroad – to this neoclassical brick pavilion, which they called their “teahouse” when they needed a break from the formality of their main residence. Duffy said he and his friends would go there to “hang out and have fun.”

The estate later sold the teahouse to a couple who expanded it into a residence but never lived there. The home sat empty for seven years until Duffy came along to rescue it. There was considerable work to do, so Duffy turned to his decorator Richard McGeehan, with whom he had collaborated eight times, to create a masterpiece.

Photography by James Merrell. Images and captions via Elle Decor. 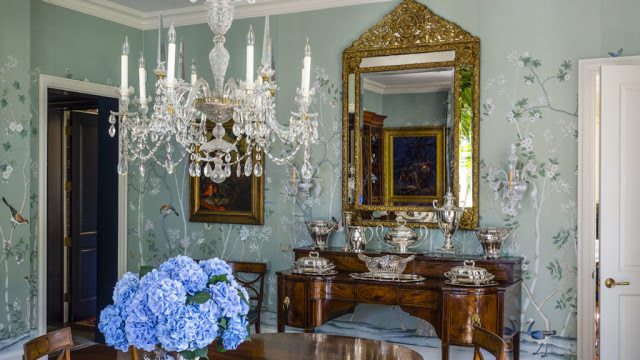 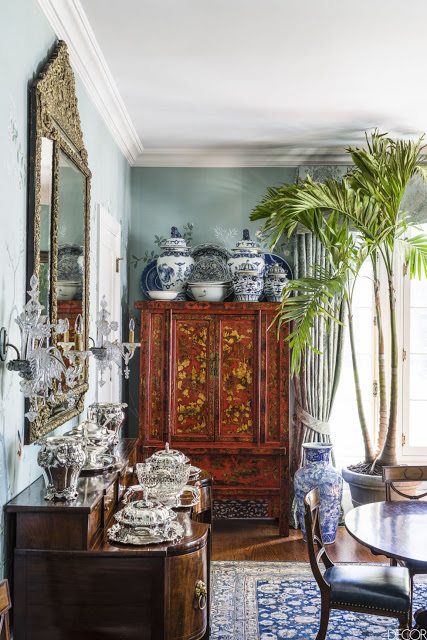 A cabinet is topped with ginger jars, platters, and bowls from Duffy’s extensive collection of 18th- to 20th-century blue-and-white ceramics; the curtains are of a Scalamandré damask. 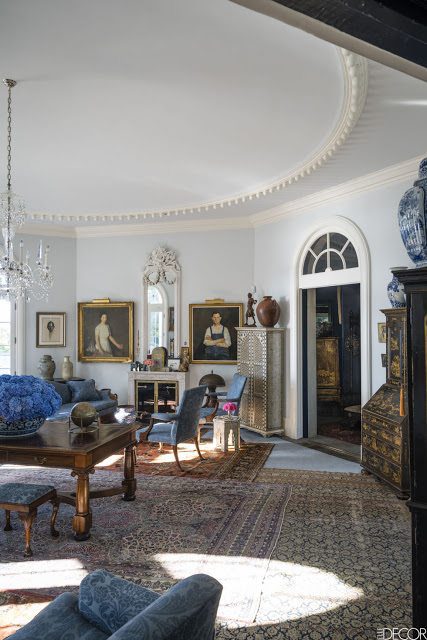 In the living room, the 18th-century English Chippendale sofa and George II–style antique library chairs are covered in a Brunschwig & Fils damask; the mahogany library table is from the late 19th century, the lacquered chinoiserie secretary is 18th-century English, and the bone-inlaid armoire is from Morocco; the antique Persian rugs are from Rug & Kilim, the circa-1910 portraits are by Charles Webster Hawthorne, and the wall color was mixed on-site. 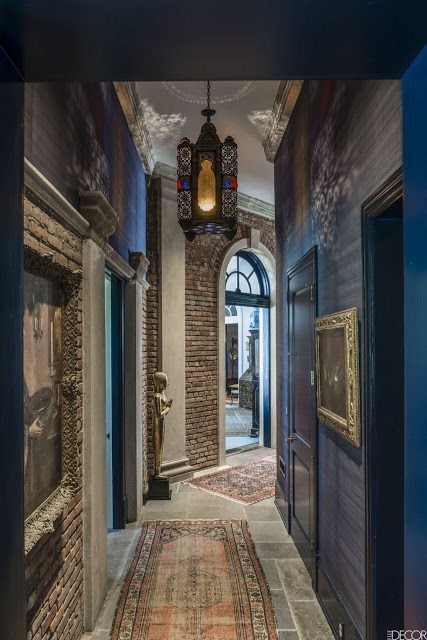 A hallway showing the original front wall and doorways of the Astor teahouse; the 19th-century brass lantern is from Morocco, and the silk wallcovering is by Fromental. 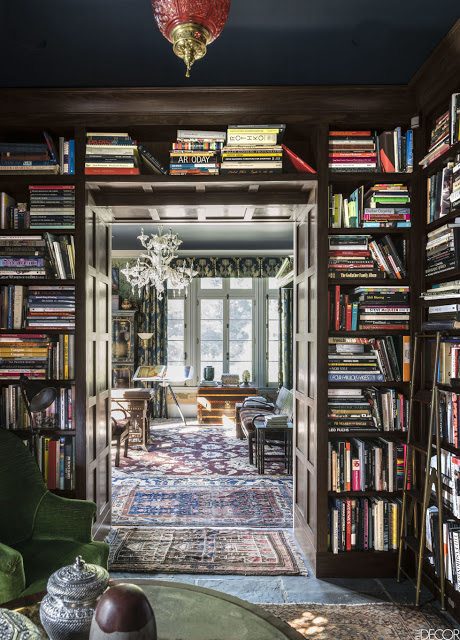 McGeehan designed the walnut bookshelves in the library; the brass library ladder is from the 19th century. 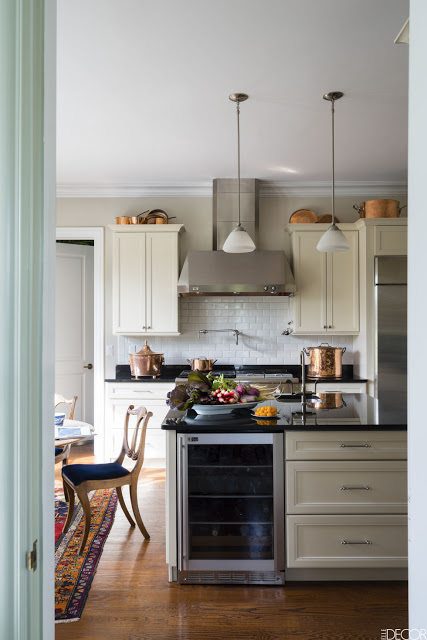 The kitchen’s wine refrigerator and vent hood are by GE Monogram; the Regency-style mahogany dining chairs are from the 1940s, and the collection of copper cookware includes antique and vintage pieces. 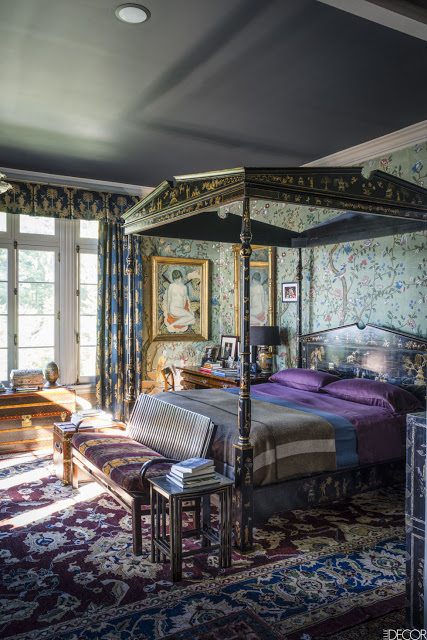 In the master bedroom, the lacquered canopy bed is from Fernworks Antiques, the Chinese Art Deco bench is covered in a Clarence House velvet, and the hand-painted wallpaper is by de Gournay; the curtains and pelmet are of Lelievre damasks, and the 1920s painting is signed Constant; the 20th-century Persian rug was shaved to make it look older. 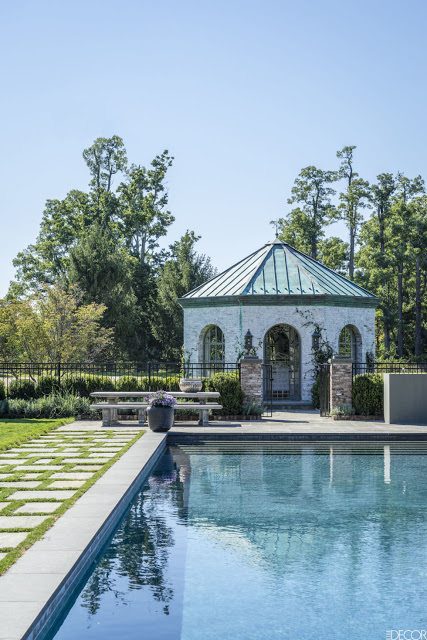 Bluestone surrounds the swimming pool, while the adjacent pavilion is faced in limewashed brick and has a copper roof; the limestone table and benches are from Elizabeth Street Gallery. 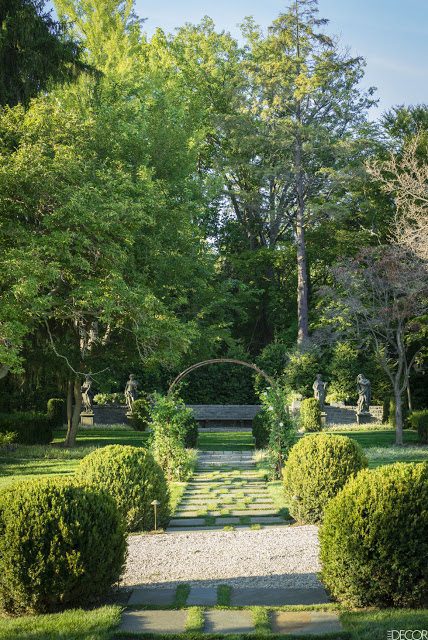 The landscape design by Michael Trapp features a path flanked by boxwood balls and an iron arbor original to the Astor estate, now covered in New Dawn roses. 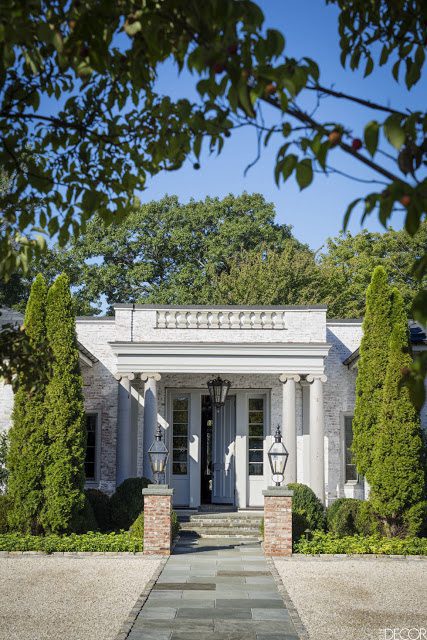 The Tea House at Ferncliff was built by Vincent Astor and designed by architect David Pleydell-Bouverie in 1948. (source)

So beautiful! Click here to read the original feature from the October issue of Elle Decor. You can read more about the intriguing history of Ferncliff via New York Social Diary.