Madcap Cottage week continues at The Glam Pad, and today I am thrilled to present a special guest post by Jason Oliver Nixon. On Monday, I featured the stunning 1930s Regency style home Jason and his partner John recently renovated in High Point, North Carolina. You may have noticed their fabulous Greek key embellished doors, salvaged from an estate designed by the late Otto Zenke. Since moving from New York to North Carolina, Jason and John have become enthralled by Zenke. Never heard of him? Neither had I…

Jason and I recently corresponded when I posted the following image on Instagram… He recognized Zenke’s work, and I was intrigued to learn more. The Madcap gents have become avid collectors and historians of Zenke. Fascinated by this relatively unknown legend, Jason graciously agreed to share his knowledge through a guest post… and provide a tour of the Madcap collection. Enjoy! 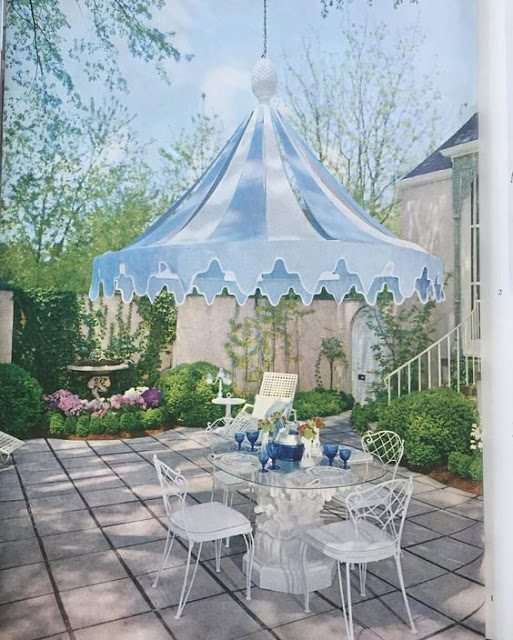 Suspended umbrella by Otto Zenke from the 1970 Garden Decoration book, House and Garden.

The Madcap Cottage gents love nothing more than poring through the vintage design books that we collect by the dozen and scatter about our 1930s-era House of Bedlam home in High Point, North Carolina. Early on in our careers, we fell in love with Dorothy Draper and soon became enamored of Billy Haines, Sister Parish, Nancy Lancedszaaster, Syrie Maugham, and a slew of gone-but-not-forgotten design world luminaries.

But it wasn’t until we started trawling Greensboro, North Carolina’s amazing consignment shops that we learned of the incomparable Otto Zenke. Chances are that you have never heard of this NYC native who hightailed it down south in 1937 and created bold-faced interior design projects such as legendary financier Richard Jenrette’s NYC maisonette (profiled in Jenrette’s coffee table book, Adventures with Old Houses), and neither had we.

As John and I scoped vintage finds in Greensboro after hoofing it about at Market—years before we, too, eventually decamped from Brooklyn “a la Zenke” to High Point—we would occasionally unearth a fabulous, deliciously theatrical gilt shell sconce that bore the name “Otto Zenke” emblazoned upon the back. We felt simpatico to his vibe, a mix of tradition and theater, the historic and highflying. And so we jumped online and read all that we could find about this mysterious Mr. Zenke. And there isn’t a lot penned about Zenke, it seems, and that’s possibly because his works were not widely captured in photography like the vast cache of imagery that exists for his very marketing savvy peer Dorothy Draper. 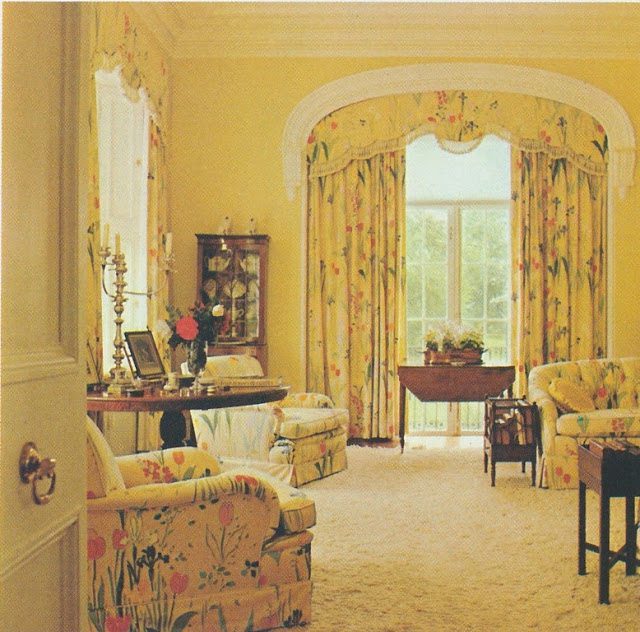 Otto Zenke-designed home in County Clare, Ireland. The fabric is Paule Marrot’s Guermantes, which is still available today through Brunschwig & Fils. Image via The Peak of Chic. 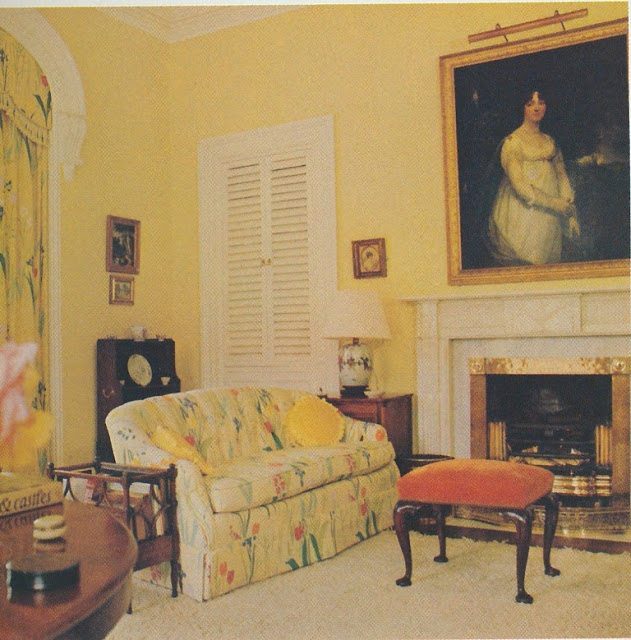 Image via The Peak of Chic.

There are occasional Zenke homes that go on the real estate market, and it is well worth attending an open-house afternoon to poke about. The delicious miniature rooms that Zenke lovingly tended can be scoped at the Greensboro Historical Museum. But, sadly, of the dozen vest pocket-sized rooms that are still extant, only three are on display.

“Born in Brooklyn, New York in 1904, Otto Zenke studied interior design and started his career at B. Altman & Co. in New York before moving to Greensboro, North Carolina, where he worked as chief decorator at Morrison-Neese Furniture Company during the late 1930s and 1940s. Zenke opened his own design studio and showroom in 1950 called Otto Zenke, Inc. He designed and decorated primarily residential properties for another three decades and eventually opened offices in Palm Beach, Florida, and London.” 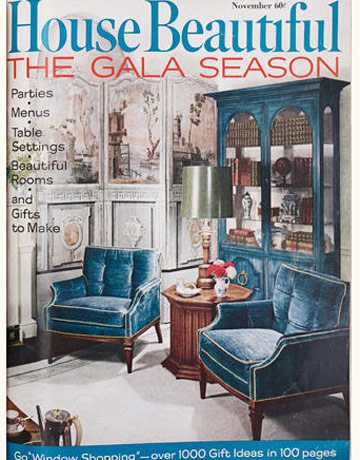 Otto Zenke’s work on the cover of House Beautiful, November 1965.

Happily, the Madcaps have discovered several Zenke finds upon our hunts, and these treasures pepper our High Point pad. We situated the aforementioned gilt-glazed shell sconces in our master bathroom, a wonderful rolled-arm bench in our bedroom, sconces in the foyer, a painting in the basement, and a mirror in the living room—and have scattered various Zenke-licious accessories throughout. We have spoken to friends whose families knew—and hired—Zenke and have read the occasional local article about the guru and literally shriek when we uncover further treasures. 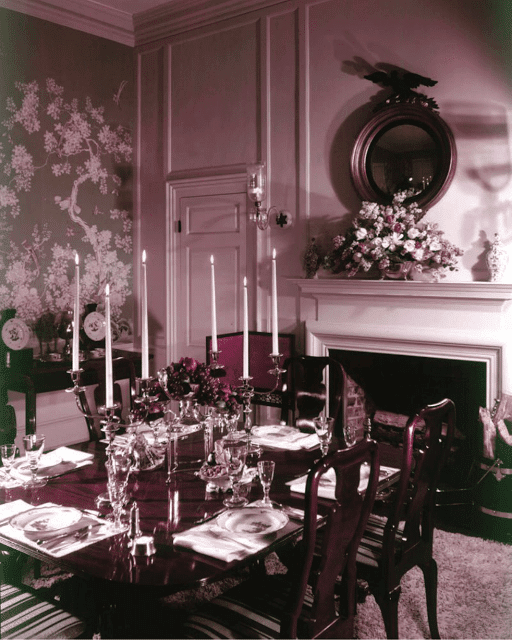 We hope that Zenke has a resurgence, a splash that will introduce him to new generations. We hear that his library and papers reside with a Zenke family member, and we would love to see these documents eventually make their way to the Bienenstock Furniture Library, the world’s largest design library that happens to sit on Main Street smack in downtown High Point. And then maybe Zenke will receive the contemporary accolades that he so deserves.

Until then, the Madcaps are having a serious case of Otto-mania! And you’re invited to join the party. 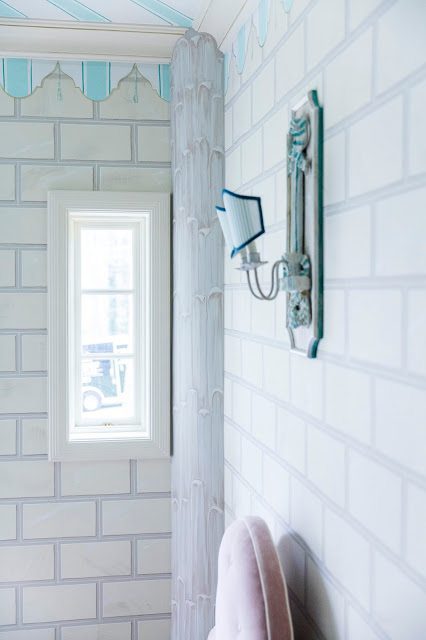 We have a pair of vintage, ribbon-decorated Otto Zenke sconces that takes place of honor in the House of Bedlam foyer, aka the Grand Hall. The hand-painted walls in the space are a nod to famed British muralist Rex Whistler and also channel our style muse, the late American heiress Bunny Mellon. 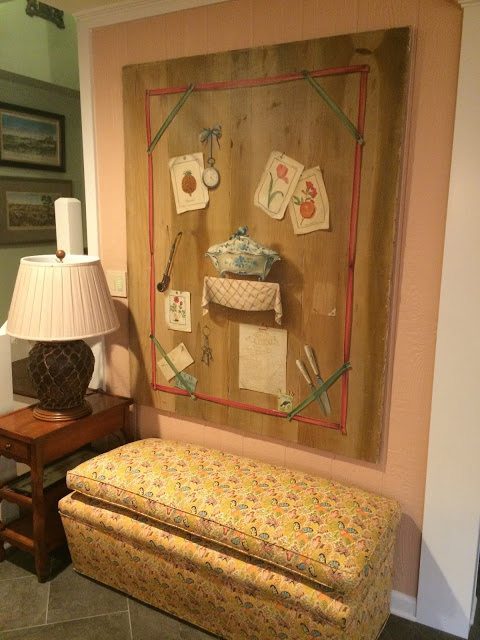 In the House of Bedlam basement, a painting that Zenke commissioned for clients in the 1960s covers a cozy wall. Note the trompe l’oeil envelope with Zenke’s address painted upon it. The bench beneath the painting came from the C.Z. Guest auction in upstate New York last fall. 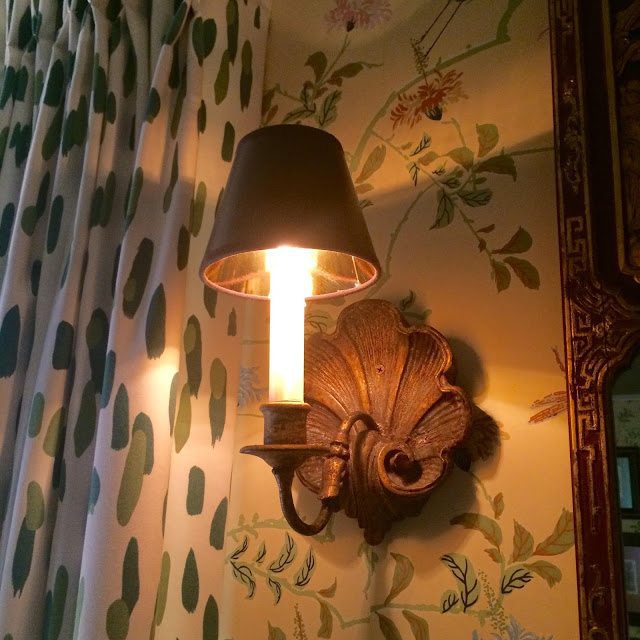 A pair of gilt shell Otto Zenke sconces in the House of Bedlam master bathroom. Chic, no? The curtain panels are crafted of Mill Reef, a Madcap Cottage for Robert Allen Design fabric pattern from our debut collection. The wallpaper is from Bob Collins and Sons in Palm Beach. 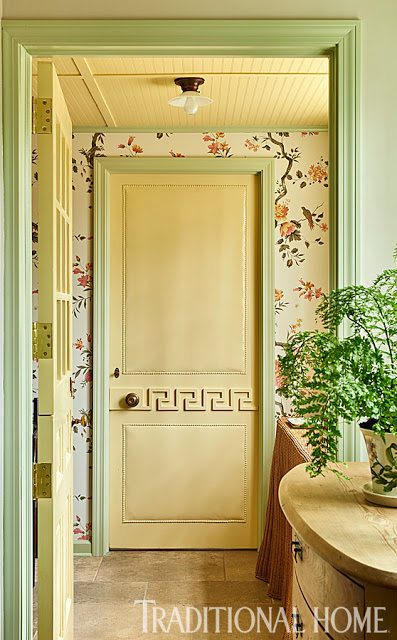 The Greek-key embellished doors were salvaged from an estate designed by Zenke. 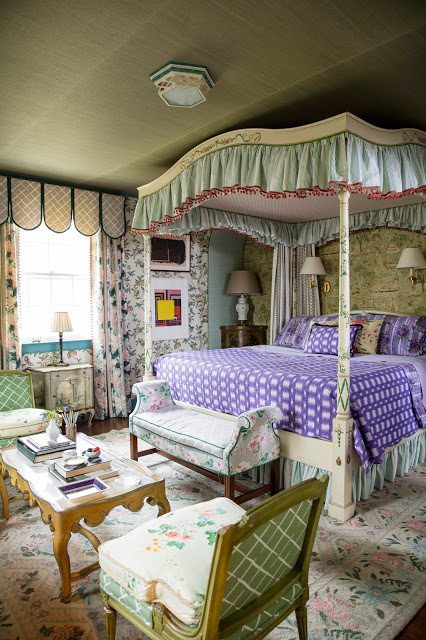 In the House of Bedlam master bedroom, we recovered a vintage Otto Zenke roll-arm bench in our Madcap Cottage for Robert Allen Design fabrics. When we purchased the bench, it was wrapped in a dun yellow Naugahyde. We kept the original Zenke tag when we had the bench refurbished. 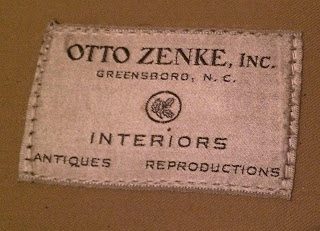 Thank you, Jason, for sharing your knowledge surrounding this impressive and influential designer. I have now developed a serious case of Otto-mania and will be on a mad hunt for additional information and treasures! Further images and details on the life of Otto Zenke can be found in the October 2013 issue of O.Henry magazine (beginning on page 60). And make sure to check back on Friday, as I will feature two Zenke designed homes from the MLS!